"It was good, a good workout. Hot conditions and that is probably what you want in pre-season. You want to replicate what the first day will look like.

"A good game, tough opposition, physical game so I think the lads in 45 minutes with a bit of running at the end got what they needed.

"I think at this stage there’s always a bit of rustiness to get out of the players’ minds, bodies, touches of the ball. I do think we got better as the game went on. Some really good bits, some bits that we need to improve.

“We conceded a goal I was disappointed with and had another couple of moments where we needed to tighten up, but I can’t be too critical.

“We know where we are at this stage. We know there is a long way to go before that first game. I think you always look in the pre-season at attitude first and foremost. Both teams wanted to win.

"I thought there was some really good stuff with the ball, naturally as we had the majority of possession. You saw a couple of great counter-attacks at the end and there could have been more.

"We showed a ruthless side right at the end of that game. I would have loved us to show that a bit earlier but it came. When it came, we showed we can be a really potent force."

"He showed his athleticism in the first (goal) and composure in the second. So I’m delighted with Miggy. He’s come back here and hasn’t had a lot of training as we gave him a little bit of extended time off with the other international players. Physically he didn’t show any problems."

"Yeah, really pleased with it: obviously tough opposition, a really good test for us individually and as a group. Obviously the scoreline is what it is, but for everything else, we really enjoyed it.

We played some really good stuff in patches, we created chances and I think ultimately, the last three (goals) went in late on when we'd made changes but the point is that we got a lot out of that game.

"You can see that the lads who have come in are understanding and learning the way we want to play and really adapting to it." 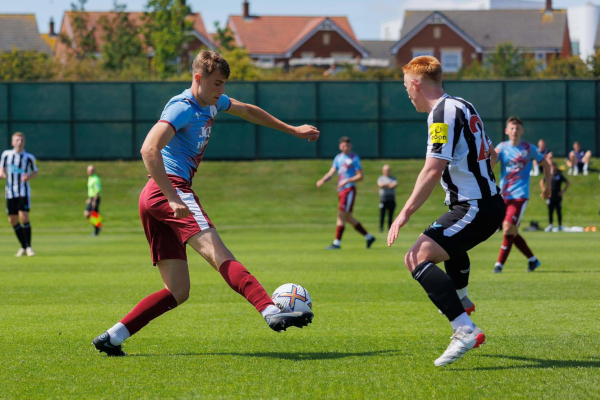 United made a winning start to their pre-season programme on Saturday, beating National League neighbours Gateshead behind closed doors in blazing sunshine at Darsley Park.

1-0 became 2-0 two minutes after the restart when Sean Longstaff was tripped in the area and Joelinton supplied a routine finish from the penalty spot.

The visitors halved the deficit in the 65th minute when Paul Blackett took a pass from SJP old boy Greg Olley and shot past Karl Darlow, before a second penalty award to Newcastle on 71 minutes saw Sean Longstaff fire over.

United's two-goal advantage was restored in the 81st minute when Miguel Almiron dispossessed a defender out on the right and galloped into the box before shooting beyond the goalkeeper.

Seven minutes later the Paraguayan grabbed his second of the game from similar range after Allan Saint-Maximin unselfishly played him in.

And there was time for a fifth Newcastle goal in the closing seconds of play; Saint-Maximin marauding forward and teeing up Joelinton to square the ball from the left side of the box for Sean Longstaff to finish.

Watching but not involved were recent recruits Nick Pope and Sven Botman,  while Fabian Schar, Bruno Guimaraes and Chris Wood also looked on after returning to training in recent days following extended time off.

Many thanks to the ever-intrepid GW