"Always disappointed not to win but very pleased with a point in the end, especially after the second half. I thought it was a difficult second half, Brighton played very well.

"We rode our luck at times but dug in and showed a great spirit and unity. We got a valuable point.

"First half we were good on the counter and competitive. Second half they took control of the game and we hung in there and defended well."

"He’s a very relaxed figure, very popular in the dressing room and has a real calmness about him. The save from Lallana was top class.

"You’re only as solid as your defence, I think we’ve changed personnel, added strength and added depth and now we’ve got some very good characters in that unit.

"And I think you saw that today, because we were under the cosh but we stayed calm and we battled through it.”

On Burn and Botman:

"I thought Dan did great today. It’s difficult, although it’s a small transition across the pitch, it’s a huge one at the same time.

"He hadn’t played left-back for a long time but I thought he did very well today against his former team and made one crucial block at a key time in the game. Overall, I’m very pleased with his attitude.

"I thought he (Botman) did very well. He looked composed, solid and had a good partnership with Fabby. I was very pleased with him and I thought he used the ball very well, especially in the first half.

"To come here and be part of a backline that keeps a clean sheet albeit it wasn’t always calm at the back.”

"As I’ve said many times, we’re looking. We are aware that there are certain parts of the squad that we’d love to strengthen and give us more options.

“But that’s no reflection of anybody we currently have in our squad because I think we’ve shown that we love everybody within the group. There’s a very good feeling internally, within the dynamic of the team, so we desperately don’t want to harm that either.

"I think there’s always that part of you that, as much as you’re frustrated that you can’t sign any more players when they window has closed, there’s actually a nice relief when the window shuts and you can say, ‘Right, that’s the group that we have – and that’s the group we’re going to go forward with’.

"Nothing can change that then. My focus is always on the players we have inside the building, not externally. That’s always been my first instinct, to try to develop them, even when the window is open.

"But a lot of your time is taken up with the window because it’s such an important process as you try to get the right players in.

"It’s an ever-changing thing, so if you’re not careful, you can waste a lot of time watching players that maybe aren’t attainable, or for lots of different reasons that you can’t get. That’s part of the job though, and it goes with it hand in hand.”

"It’s a bit frustrating because I think our performance deserved three points and a win but against Newcastle we take that. The overall performance was very very strong: Newcastle play at a real intensity so to compete in the way we did and sustain it in the most difficult conditions that I can remember was really impressive.

"I loved the performance and I loved what they were trying to do so its really positive. Sometimes the goal goes in and you don’t know where they have gone in from, other times a keeper will make a good save or there will be a good block, but that’s football.

"It’s not the easiest thing in the world to do but I have no doubt we can score and the boys can finish. The performance level is the thing I focus on the most, as that will enable us to get points in the future.

"I thought we played really well against a good team. They've got dangerous players with pace and power.

"I couldn't quite believe we didn't score but our attacking performance was very good. They defended well but that's life. We can be very positive about today. There was excitement and intent from us.

"The performance was fantastic. Although we should have won we're incredibly proud. We were playing against a top team.

"Credit to the goalkeeper. We just missed that last little bit. We knew how tough it was going to be against Newcastle, with the way they set up and how good they are on the counter-attack.

"I’m always content with the squad, you’ve always got to look at what you have got and how you can improve. It’s a different mix of players, so there’s not another Danny Welbeck in terms of profile, So that’s something we may look at if we are going to look anywhere.

"But we’ve got some good options in terms of attacking in Denis (Undav), Evan Ferguson and Julio (Enciso). There’s a lot of different profiles from an attacking perspective but while the window’s open we need to keep looking and see what’s out there.

"I think we don’t need to react to stuff. We are quite calm as the balance of the team is good. We still have players on the bench that have not played yet that can still have an impact.

"We are not bare on numbers, we need to make the right calls and the right decisions that doesn't put the club under any strain financially.” 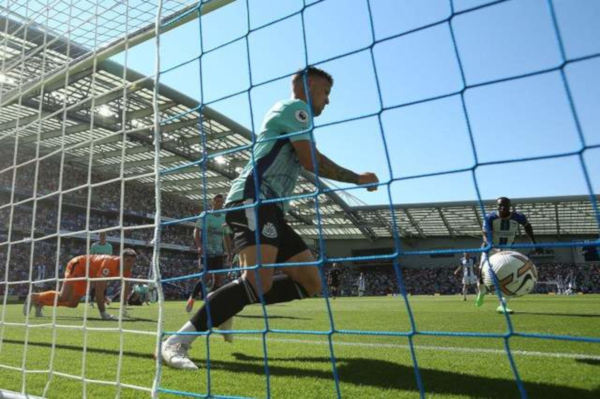 Kieran Trippier not over the line

Newcastle remain unbeaten and unbreached in the Premier League after a scoreless draw in the scorching heat of the Amex Stadium on Saturday.

A cloudless sky and temperatures of 31 degrees at kick-off took their toll on both players and fans, with additional drinks breaks permitted by the Premier League for the latter.

They offered fleeting relief to a United defence who had to battle hard for a second successive clean sheet on a day when they were collectively off colour - despite wearing a one-off fourth kit to avoid clashing with the hosts.

Nick Pope made some decent stops, but Brighton will wonder just how at least one of their 20 attempts on goal didn't beat the England 'keeper.

It was a different story at the other end as Callum Wilson had a lonely afternoon; former Seagull Dan Burn coming closest with a header and Joe Willock having an effort comfortably saved as the Magpies created very little to threaten Robert Sanchez in the home goal.

Allan Saint-Maximin was booked for a dive in the first half and both Joelinton and Fabian Schar also saw yellow after the break in a frustrating game for Eddie Howe's side - the Brazilian fortunate that his touchline tussle with March wasn't deemed worthy of greater sanction. Coming after Joelinton's indiscretion in Lisbon, there's some concern over his temperament.

Misses by Solomon March, Leandro Trossard, Pascall Gross, Adam Lallana and Joel Veltman let United off the hook as the two sides cancelled each other out once again; this a sixth top flight draw in 11 meetings, four of were goalless.

Albion shaded the first period after forcing a series of corners in the opening stages, their best chance a 33rd minute effort by March that Kieran Trippier blocked then successfully cleared off his own line with millimetres to spare.

The second period saw Brighton deprive United of possession for long periods and our rearguard action made this a point gained, not two lost. Had Callum Wilson been wearing blue and white today, then it's a fair bet he'd have been on the winning side, while the uncertainty over Neil Maupay's future that saw the striker omitted from the home squad was to our advantage.

An 82nd minute VAR check for what a suspected handball on the line by Dan Burn thankfully came and went without a change of the onfield decision of referee Graham Scott to award only a corner, while Pascal Gross put a glaring late chance wide of the target after the lively Kaoru Mitoma teed him up.

The oppressive weather conditions seemed to affect United more than Albion with Bruno Guimaraes looking particularly uncomfortable throughout, on a day when we were found wanting in midfield and missed the pinpoint passing of Jonjo Shelvey.

An injury to Matt Targett saw Dan Burn preferred to Paul Dummett at left back on his first return to the Amex and he was left exposed too often for comfort by the wandering Saint-Maximin in front of him.

The point took Newcastle to third in the table, which became fourth after Brentford's 4-0 hiding of Manchester United and then fifth when Spurs drew 2-2 at Chelsea on Sunday.

Having taken nine games to reach four points last season, doing it in two this time round is a sizeable improvement by any measure.

However, a repeat of today's performance against Manchester City next weekend will result in uncomfortable viewing for those of a black and white persuasion.