United last began a reserve season with successive losses in 2019 and last suffered two dismissals in one game during 2013: a 0-3 home loss to Reading featuring red cards for Jamie Sterry and Jak Alnwick. 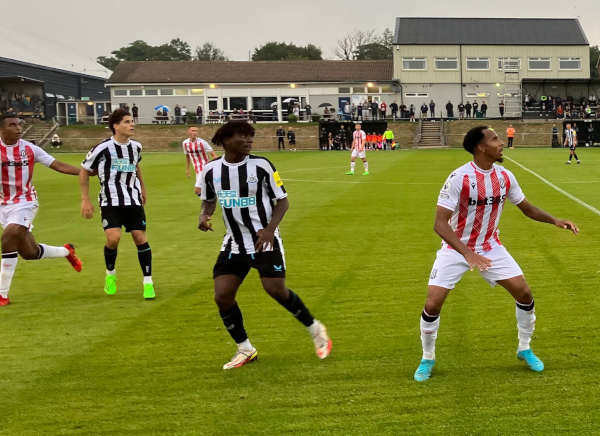 It's now two defeats from their opening two games for the U21s; a disastrous Monday evening at Whitley Park seeing them finish with just nine men.

United fell behind just six minutes of the first whistle and then saw both Michael Ndiweni and Matty Bondswell dismissed after the break for their second yellow cards.

Bondswell was guilty of a rash tackle right in front of referee David Richardson following a softer earlier caution that he disputed, but Ndiweni had reason to be genuinely aggrieved by both of his cautions.

What looked to be genuine attempts to win the ball in 50/50 challenges saw two different visiting players exaggerate what turned out to be non-existent injuries, prompting Richardson to reach for his pocket twice.

The goal that won the game was a well-struck shot from City midfielder Ben Kershaw, who was making his debut after completing a move from Rochdale.

The Magpies had two decent opportunities to level from left wing crosses by Jordan Hackett: Santiago Munoz heading wide on 14 minutes before Ndiweni got the ball caught under his feet inside the six yard box when looking a certain scorer ten minutes later.

With the rain beginning to fall, United were reduced to ten men four minutes after the break when Ndiweni was harshly cautioned for the second time.

And ten became nine in the 71st minute when Bondswell also received his second yellow card just six minutes after the first.

Despite their reduced numbers, Elliot Dickman's side redoubled their efforts to find an equaliser in the closing stages - Alex Murphy bringing a fine block out of Blondy Nna Noukeu and substitute Kyle Crossley also denied.

At the other end, Stoke counter-attacked on several occasions during what ended up being almost seven minutes of time added on, but couldn't find a way past Max Thompson to extend their lead.