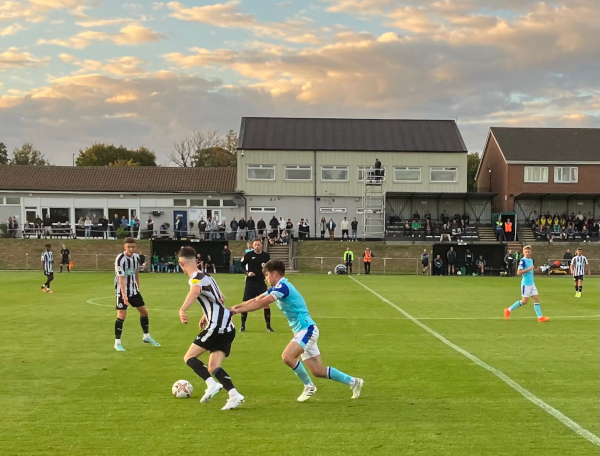 Dylan Stephenson and Kyle Crossley both hit braces against a Rams side also pointless after their opening three games - and only the efforts of visiting goalkeeper Harrison Foulkes kept the score down.

United took the lead in the eighth minute when Crossley centred from the left and Cian Kelly conveniently killed the ball in his own six yard box, allowing the alert Stephenson to poke the ball home.

It was 2-0 nine minutes later when Crossley and Jay Turner-Cooke exchanged passes on the left edge of the box, Crossley picking his spot and firing beyond the 'keeper into the far corner of the net.

Stephenson then saw his 28th minute effort blocked as the black and whites continued to dominate; home 'keeper Jude Smith equal to a Darren Robinson header from a rare Ram raid.

United extended their lead in the 58th minute thanks to a perfectly executed chip by Stephenson that left Foulkes stranded.

Jay Turner-Cooke then rattled the crossbar after a slick passing sequence, before the Derby custodian denied Stephenson again and Turner-Cooke in quick succession.

Six minutes later Stephenson turned provider, pulling the ball back from the right for Crossley to guide home.

County thought they'd found a consolation goal nine minutes from time, when Sonny Blu-Lo Everton evaded Smith only to send his shot against the goal frame.