Neither side could break the deadlock after 90 minutes and both took a point, with penalties then deciding who gained the extra point up for grabs.

That was Doncaster, after Jay Turner-Cooke's kick was saved and Alex Murphy hit the bar, with the other six efforts successful:

There was a competitive reserve debut for 17 year-old midfielder Lewis Miley, from the bench. 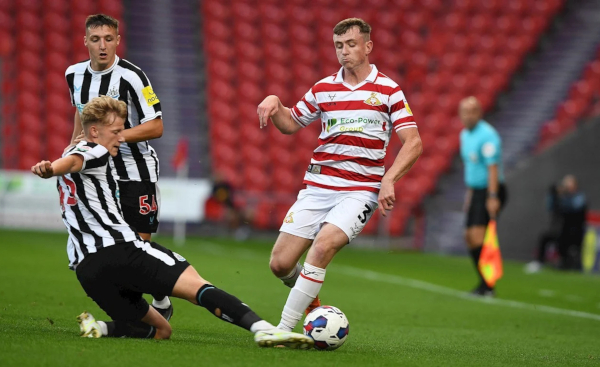 A brave effort from Newcastle U21s on Tuesday night saw them end their ten game losing streak in the EFL Trophy, before missing out on an extra point in the penalty shootout that followed.

Elliot Dickman's side held League Two Doncaster Rovers to a scoreless draw over 90 minutes for their best result in this competition since December 2018.

Kicking off at the Eco-Power Stadium with all but one of the starting line-up that beat Derby County 4-0 in PL2 on Friday, United came close when a 13th minute clearance by a home defender struck Kyle Crossley and hit the Rovers goal frame.

Doncaster had a chance to take the lead in the 28th minute when Tavonga Kuleya was clean through but his weak effort was gathered by Jude Smith.

United's Joe White then spotted the 'keeper off his line in the 38th minute and his shot from the centre circle went just over the bar. Crossley drew a good save from Louis Jones just before half-time with a long-range effort.

Midway through the second period, Rovers' Adam Long headed a right-wing free-kick narrowly over but it remained scoreless.

A minute after United made a double substitution, Kyle Hurst's cross-shot was finger-tipped behind by Smith and then Dylan Stephenson had a good chance but it was beaten away by Jones.

With both teams earning a point, a penalty shootout then decided the destination of the additional point offered in this competition.

Remi Savage and Kyle Crossley both beat Louis Jones with home players doing the same before Jay Turner-Cooke's kick was saved. Rovers then went ahead before Alex Murphy hit the bar and Kieran Agard stepped up to win it.

The other two teams in Northern Group E also met on Tuesday, Lincoln City winning 3-0 away at Barnsley.

Thanks to our man in the stand, GW.