77 mins Although he protested his innocence, Gordon Smith body-checked Micky Burns in the box and was penalised, Burns confidently beating Jimmy Rimmer in the Gallowgate End goal from the spot 1-1 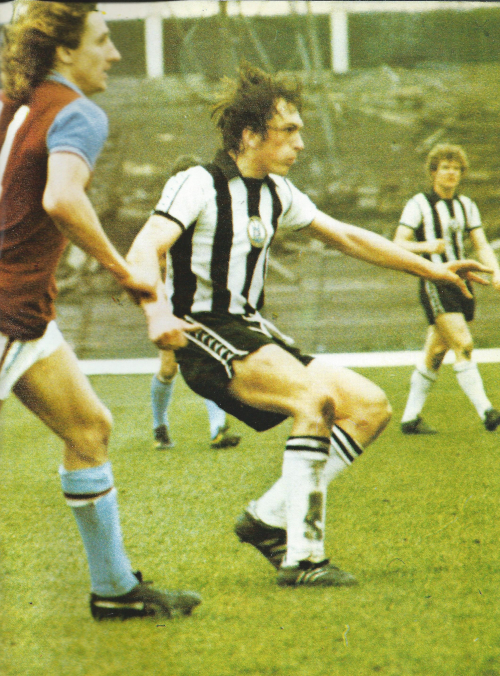 So here's where the story starts, on a sunny Saturday at St. James' Park.

It's a 3pm kick-off, as it always was in those days when the only domestic football matches on TV were the FA Cup and League Cup Final - and they also got underway at the same time.

The covered Leazes End had hosted its final crowd 10 days earlier against Manchester City and was now occupied only by a yellow JCB digger, less than 20,000 spectators gathering on the remaining three sides of the ground.

Mid-table Villa were on a four match winless run that saw hopes of Europe receding, while Newcastle were aiming to collect maximum points at the thirteenth time of asking, having failed to win their last eight home games.

As a consequence, Bill McGarry's side languished in 21st place - kept off the bottom of the First Division table only by an equally rotten Leicester City.

Seven points from safety - when victories were worth two points, not three - they had seven games to save themselves from a first demotion since 1961.

0-0 at half time although the visitors had a stack of chances, Brian Little beating Mick Mahoney but not the goalpost from distance.

Newcastle's sole moment of "danger" was an Alan Kennedy free kick that passed harmlessly across the Villa box. Other than that, their only sign of fight came when Allan Evans and Irving Nattrass locked horns - and were lectured by the referee but not booked.

The visitors went ahead midway through the second half, but the black and whites did earn a point when Micky Burns scored from the penalty spot following what seemed to be an unbelievably long delay, to young eyes.

Although not mentioned in the newspaper match reports, Newcastle did have a goal ruled out in the second half (from memory when they were losing).

By the way, among those filing a few paragraphs from the press box were Len Shackleton and Jackie Milburn. Former Magpie Tommy Craig was also present with his Villa colleagues, but unable to play due to injury.

As a result, a certain 11 year-old returned home believing that he'd seen a home win - until realisation dawned, possibly with the aid of Sports Report on the car radio and later confirmed by the Football Pink.

The rest is (internet) history and the Magpie mania was in, the results of which you are reading almost 42 years later.

PS: Fast forward to the summer and the that season tickets went on sale. The entire ticket office queue comprised of one lad and his badgered dad, intent on purchasing passports to misery for the Centre Paddock.

The bloke behind the window just laughed at us.