19 mins Lomana LuaLua's shot from Quinn's pass was blocked by goalkeeper Jordy Besselink, but Lua was on hand to sweep the rebound home. 1-0

24 mins Brian Kerr set up Alan Shearer to shoot into the net. 2-0

29 mins Lomana LuaLua set up Alan Shearer to shoot into the net. 3-0

60 mins Steve Caldwell crossed for Marcelino to net with a header. 7-0

62 mins Maarten Bollen diverted a Solano cross into his own net. 8-0 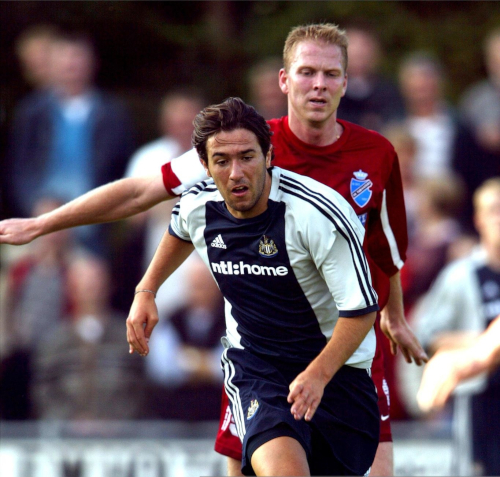 The second game of United's pre-season jaunt in the Netherlands took them to the extreme east of the country, a short walk from the German border.

With something of a history of welcoming foreign opposition, amateur side Tubanters (which loosely translates as the first settlers) had played host in previous years to Real Zaragosa, Schalke 04 and Spurs.

Their affable manager pointed out before kickoff that their scoreboard only went as far as nine and if we got any more, we'd have to start from one again.... He was nearly right….

Early signs of a compact and organised home side evaporated within 20 minutes once the scoring started, as Newcastle's first outing in the new blue and grey change strip proved to be a goalfest.

There were dropped pencils a-plenty in the press box as both Bassedas and Marcelino got on the scoresheet, the latter for the first time in a first team outing of any sort. Suspicion lingers that United settled at nine so as not to embarrass their hosts unduly.

The final word from one local, who applauded as Wor Al completed his hat trick, before wryly commenting that "not all Dutchmen are as daft as Gullit".