23 mins Picking up the ball in central midfield and with no opponent near him, Hatem Ben Arfa swept a pass out to the advancing Sylvain Marveaux on the United right and he burst into the penalty area, sped past a challenge and hitting a low left-footed effort through the legs of Maritimo 'keeper, Romain Salin at the Leazes End. 1-0

79 mins Brazilian striker Philipe Fidélis dos Santos  made progress infield from the left flank and after playing a wall pass with a colleague that cut out Fabricio Coloccini, reclaimed the ball in the United area. Skipping past Steven Taylor, he then fired powerfully between Tim Krul's legs from similar range (but the other side of the the Leazes End goal) as Marveaux 1-1

"It's a hamstring problem (with Ben Arfa), so it will definitely keep him out on Sunday, and probably next week. I don't know from then on. I don't think it's a tear, according to the doctor, so it's not a long injury, but it will certainly keep him out for the immediate future. We are just having blow after blow.

"He (Cisse) got a kick on the thigh and he was starting to limp with it because it tightened up over half-time, so unfortunately I had to take him off when I didn't really want to. With no striker on the bench, it was proving problematic.

"Shola looks doubtful for the next couple of weeks but Papiss, I think, has got a good chance for Sunday - hopefully we have done enough tonight to protect him.

"We needed to get a result and got that and got through. I look at this competition - with a sticky second half today but otherwise I think we have been excellent.

"It's sometimes misleading, the competition, when the Champions League teams come down, how motivated they are for it. It's almost a secondary competition for them. Some of them might be a better option than a team in the competition already. It becomes a stronger competition, obviously. We would obviously like the second leg at home - we need to win the group to do that - and we have still got that opportunity.

"We wanted to qualify, so we have done the job. The last 20 minutes of the game, Maritimo had nothing to lose and we were poor in that period, I am not going to cloud over that.

"But to some extent, we didn't have enough threat up the top of the pitch. We lost Hatem and then we lost Papiss - we lost Shola yesterday - and we didn't really have enough pressure up there that could cause them problems.

"They had nothing to lose, so they came on to us, and that was a little bit disappointing, that period, but I am delighted we are through.

"It's very important for us, for our feeling because up until that last 20 minutes, we have been excellent in this tournament, so I am not going to get carried away by that. We know that we are really stretched at the minute, and I thought that showed in that period."

"It was an epic night, we dominated the game with superior possession of the ball. Unfortunately, a loss of ball allowed Newcastle to score. They were very efficient.

"We had a truly fantastic game - the second half display was very good and we created several chances. We cannot move to the next phase, but we made a very good impression.

"Hopefully this is the start of better times for us in the future - if the team is better at finishing.
We have to look to the future with pride and confidence and deserved a second goal - the Newcastle public were hardly heard.

"Of course, I thought Fidelis's shot had gone in. It would have been the cherry on the top of the cake. It would have been a good goal. We worked for it. Unfortunately it didn't happen. In general we were not inferior in both games against Newcastle." 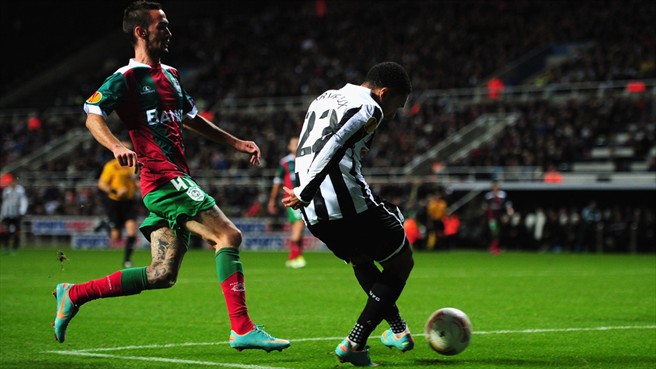 Despite failing to record the hoped-for victory that would have given the club a collective boost, Newcastle made it through to the Last 32 of the Europa Cup at St. James' Park on Thursday night. However, injury concerns over a further two players overshadowed our progression.

With Shola Ameobi added to an ever-lengthening list of non-combatants that included the suspended Cheick Tiote, Hatem Ben Arfa limped off during the first half with a hamstring injury. Papiss Cisse meanwhile was unable to continue after the interval - although fears that his infamous back injury was the cause were allayed, the striker suffering stiffness after a kick on the leg.

Winger Sylvain Marveaux scored his first senior goal for the club but a late leveller from visiting substitute Fidelis was enough to knock the Magpies off the top of the group, the same player shooting narrowly wide in added time to deny the visitors from Madeira an improbable victory.

In truth, United did the bare minimum to progress to the next stage of the competition, failing to beat the weakest team in the group for the second time. Fringe players in midfield struggled for fluency and the continual loss of possession puts question marks over their suitability for Premier League duties anytime soon - the flip side of the Carr Master Plan.

The squad is now stretched beyond the limit and the weaknesses are glaring. The most mundane of opponents continually caused us problems tonight and it doesn't bear thinking about what havoc a decent side would have wreaked - despite the fact we fielded our first-choice back five.

For much of the game, Ben Arfa's pass and Marveaux's subsequent finish looked enough to secure the three points that would confirm United as group winners, but as the tie entered the final quarter, Alan Pardew's side were firmly stuck in neutral and the prospect of a second goal had evaporated, something that Maritimo sensed and were able to take advantage of.

The sparse crowd had seen only sporadic goalmouth incidents in the first half; Davide Santon warming the goalies gloves early on with a swerving shot and Cisse's disallowed follow-up to a Marveaux effort after we were 1-0 ahead. That latter move saw Ben Arfa stretch and quickly pull up, before hobbling off the pitch to be replaced by Demba Ba.

After the break though, the Gallowgate penalty area almost became a no-go area for the home side: Sammy Ameobi toe-poking a Taylor nod-back wide and Ba almost turned home a cross from Santon - one of the few times that our top scorer wasn't penalised by an over zealous referee when either in possession or attempting to challenge for the ball.

Cisse's departure and the later removal of Ameobi brought Romain Amalfitano and Mehdi Abeid into the action - although they completely failed to make an impression on the game. Shane Ferguson warmed up but wasn't called upon - which didn't make a great deal of sense to us.

Maritimo meanwhile had efforts from Danilo and Sami go close, with Krul tipping over one effort and pushing another shot from Ferreira behind for a corner. And after his deserved equaliser, Fidelis had the ball in the net again only to be correctly denied by an earlier linesman's flag.

And with just seconds remaining the same player should have got the winner when the ball fell to him at the far post. Thankfully though he placed a first-time shot wide, to Krul's evident relief.

In Belgium meanwhile, Bordeaux's 2-1 win over Club Brugge left them top of Group D, meaning we must go there and win our final Group game to reclaim top spot. Despite tonight's disappointment though, Newcastle can at least now travel to France assured of qualification - regardless of the scoreline in the Stade Chaban Delmas next month. God knows who'll be in the team for that one.