2 mins Chris Waddle was allowed to reach the byline down the left side and send over a looping cross to the far post, picking out Neil Macdonald to head home in front of the School End which housed the away support. 1-0 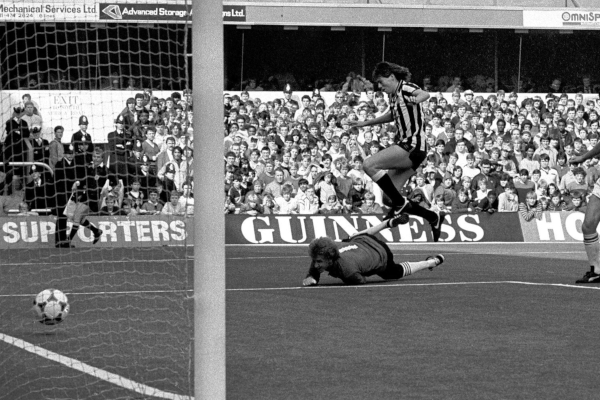 18 mins Peter Haddock's pass set Chris Waddle away on the right hand side of the area and he evade the advancing Peter Hucker before firing home as the angle narrowed. 2-0

22 mins Glenn Roeder's free kick into the R's box was partially clearer to Kenny Wharton, who sent a first-time effort goalwards. That struck the goal frame via a home player and fell into the path of Chris Waddle, who had a simple finish from six yards out. 3-0

41 mins Question marks about the Rangers defence but no doubting the quality of the finish from Chris Waddle, who took a ball from Peter Beardsley following a throw-in on the right and unleashed a powerful curler that whistled past Hucker and into the top left-hand corner of the net. 4-0

48 mins Route one from Rangers, as Hucker's long clearance is touched on and sets Gary Bannister off en route to goal. Kevin Carr was quickly off his line and blocked the first effort, only for Bannister to continue his forward run and nod the rebound in. 4-1

56 mins Thoughts of a comeback grew stronger after some boneheaded defending handed the hosts a farcical second; Haddock's hoofed clearance catching Kenny Wharton on the chin before flying across the Newcastle box and into the net. A more outlandish OG you will never see. 4-2

75 mins Carr came off his line to try and intercept a forward ball from Gary Micklewhite but John Gregory kept his composure and expertly lobbed the 'keeper from just outside the box. 4-3

84 mins Waddle took Peter Beardsley's elongated pass and crossed from the United right for Kenny Wharton to finish from inside the six yard box. 5-3

85 mins Steve Wicks got up at the far post to head home a deep cross from the right by Wayne Fereday following a free kick. 5-4

90 mins An attempted clearance by United was headed straight back over halfway and substitute Ian Stewart threaded a pass infield for Gary Micklewhite to run into the box and hold off the covering defender Wes Saunders before planting a rising shot into the net from 12 yards.  5-5

"They’re driving me mad. I have never seen anything as disgusting as that in the 32 years I have been in the game. I went mad at the players because there were times when they were going to give me a heart attack. They just stopped playing.

"It’s every manager’s nightmare. You think they might get back in the game, but don’t really believe it when you’re 4-0 up. We just stopped playing. We did exactly the same at Arsenal, at Old Trafford and got hammered five, and again last week against Everton.

"There are so many things wrong at Newcastle it is incredible. People are asking me where I intend to start with the problems, but I just don't know. It will take years to put right. Some of the players couldn't even breathe in the second half.

"I don't know where they got their education from before, but, believe me they'll get it from me in the months to come."

"The thrill of what should have been the most memorable day of my career was ruined. I can’t believe what’s happened."

"I do not usually comment on individual performances as I believe this would be unfair. But yes, I came to watch Waddle - and he was worth watching. It's one of the most memorable games I've ever seen, fancy getting in free to see that."

"I’ll watch the second half with anybody, but the first half I’ll view privately because I might kick the dog and the television.

"These kind of games are great for the fans but they give managers heart attacks. We needed a miracle in the second half and we got it.

"I just told my players to go out in the second half and get their pride back. How can you ask any team to score four goals to save a match. What happened was Roy of the Rovers stuff. There was no way we were ever going to get anything out of that.

"The players were completely devastated at half time - their heads were down. The only thing I was concerned about was getting some pride back."

Chris Waddle became the first visiting player to complete a hat-trick on the Loftus Road "Omniturf" and joined Hughie Gallacher in being the only Magpies ever to grab a first half treble.

Newcastle only once held a 4-0 interval lead in a league game before today, going on to complete a 6-1 victory over the mackems at Roker Park in 1955.

Chris Waddle hit the only senior hat trick of his Newcastle career.

Steve Carney and John Ryan missed out through injury.

Magpies duo David McCreery and Glenn Roeder had both previously played for QPR, while Wayne Fereday and Ian Stewart would later move to SJP from Loftus Road. Unfortunately. 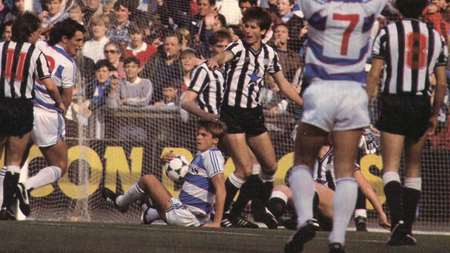 Following a 3-2 success at Leicester on the opening weekend of their top-flight return, a blistering exhibition of attacking from Newcastle looked set to hand them their second away victory of the season at a Sunny Shepherds Bush on Saturday.

In front of England boss Bobby Robson, 23 year-old winger Chris Waddle hit a 24 minute hat-trick and provided centres for a further two Magpie goals. However some pantomime antics at the other end from Kevin Carr and his defenders left Waddle with the match ball but no win bonus.

Crossing for Neil Macdonald to head home an early opener from United's first attack, Waddle then rampaged through the home defence to claim a second, knocked home a fortunate third following a rebound and then finished superbly from outside the area to round off his treble.

The R's had chances of their own; coming close to making it 1-1 when a penalty claim was rejected and Glenn Roeder headed a goalbound effort off his own goal line. Alan Mullery's side also saw a goal chalked off when three down, the referee bringing play back for an earlier free kick to the hosts.

Clearly wound up for the second half, Rangers got one back within three minutes but chances came and went at both ends before the 56th minute own goal by Newcastle that gave notice we were firmly in the twilight zone.

The hosts still weren't in control though and Hucker had to be alert to prevent his side registering an OG of their own. On 65 minutes Simon Stainrod thought he'd made it 4-3 but his celebrations were cut short by a linesman's offside flag - Glenn Roeder massively relieved after being caught napping.

With 15 minutes left though the alarm bells began to ring when QPR did get back to within one goal of us, only for Kenny Wharton to seemingly calm our fears with a simple finish that brought a chorus of "you're not singing anymore" from the Newcastle contingent.

At that point the black and whites seem to believe it's job done and switch off, allowing QPR to score their fourth almost immediately and then complete their recovery to make it 5-5 - United seemingly relieved by a mini pitch invasion that delayed them restarting the game and robbed their opponents of the momentum that perhaps could even have brought them a winner.

Despite manager Jack Charlton's outrage though, the game would be the first of ten league and cup outings without defeat for his side - although they kept just two clean sheets in that sequence and surrendering winning advantages on no less than four occasions.

PS: For reasons we've never been able to fathom, just before United score the opening goal, the electronic scoreboard at the away end reads QPR 2 Newcastle 6.

PPS: Fast forward 33 years and Newcastle were back at Loftus Road - this time for a second tier league game. An incredible night saw the visitors score four times in one half here again, this time rattling in four after the break to round off a 6-0 away victory.