"Everyone in the ground could see what I could see and there was plenty I saw that could not leave me happy. All four goals left me upset and while you must give credit to Leeds for a performance like that, we've still got to look at ourselves.

"The solution must be sorted quickly, otherwise we've got problems. It's obvious to state we were totally unacceptable. I can't remember having a performance like that when I have been a manager.

"The best thing today was the fans - they were fantastic."

"It was a great performance and the way the lads played throughout it was one of our best performances. Everyone played well on the day and from the back through midfield to the attack they all did us proud.

"In the first half they (the midfielders) were superb, the passing was good and they were so patient in the build-up.

"Newcastle's fans were superb; they were unbelievable. In fact I thought they were four up at one stage. Before the game Newcastle could have been right up there if they had won the games in hand and you look at the names of their players and they're something special.

"But there's no substitute for what we've got here, we've got rid of the prima donnas and my players are honest and have ability but especially they have a great spirit." 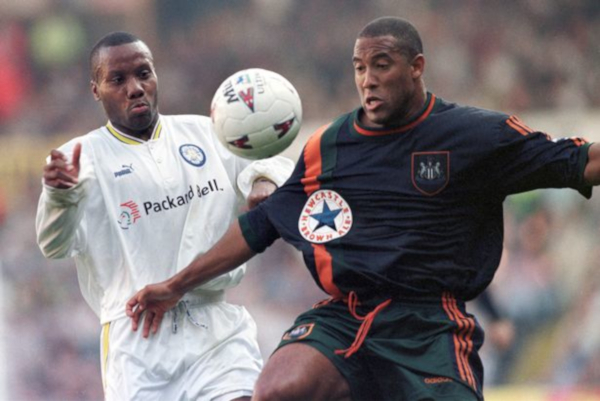 Classy Leeds swept away their Elland Road goal hoodoo with a devastating drubbing of Newcastle United. George Graham's side eclipsed their season's meagre tally of two at home by half time and with a little bit of luck Leeds could have doubled it, such was their total domination.

Leeds showed that their previous home victory over champions Manchester United was no fluke by outplaying last season's runners-up.

Graham's side eased up later on and allowed Keith Gillespie to pull back a consolation goal for the Magpies.

This mauling was the biggest defeat of the Kenny Dalglish era at Newcastle.

Graham was delighted with the way his team of battlers took apart Newcastle's big name side.

The first-half performance was easily the best since Graham arrived at Elland Road a year ago - but it has to be said that Newcastle's defence was a total shambles.

The pace of Rod Wallace and flair of teenager Kewell led the Newcastle defence a merry dance from the start.

Newcastle's overworked keeper Shay Given had to produce a magnificent 25th minute save to prevent Kewell opening the score with a blistering 25-yarder but Leeds finally got the goal their constant pressure deserved when Ribeiro shot them ahead in the 29th minute.

Wallace was the architect with a teasing run down the left that bamboozled Darren Peacock and when Wallace played a low cross to the near post Ribeiro slid in to knock the ball home ahead of Steve Howey's despairing challenge.

The irrepresible Kewell put Leeds in control in the 38th minute with a scrappy second goal.

A loose Robert Lee pass played the Newcastle defence into trouble. And Kewell took advantage of a lucky bounce off Peacock to stride forward and bury a low shot passed the helpless Given.

Rampant Leeds made it three two minutes before the break with a fluke goal: Gary Kelly's free kick from the left was mis-kicked right in front of goal by John Barnes. David Hopkin's drive was going no where until it struck Beresford and a wicked deflection took it past Given.

The Republic of Ireland keeper was badly at fault for Leeds' fourth goal from Weatherall in the 47th minute. Given came for Kelly's left wing corner, but hesitated as Wetherall advanced. The Leeds central defender, who also scored against Manchester United, was left with a simple header from six yards.

It was a nightmare return to Elland Road for Leeds old boys David Batty and Ian Rush.

There looked absolutely nothing on when Beresford pumped a long hopeful ball to the edge of the boxm but Nigel Martyn handed the visitors a goal on a plate with a kamakaze rush to the edge of his box. That left a startled Gillespie to send a looping header into the net from 18 yards.

Wallace almost marred a splendid performance with a stupid flash of temper. the Leeds man was fortunate not get his marching orders in the 69th minute after taking a wild kick at Beresford, who appeared to elbow the striker

Wallace had been booked a couple of minutes earlier for kicking the ball away, but referee David Elleray let the striker off with a lengthy lecture.

The victory hoisted Leeds above Newcastle and on this form there is no reason why Graham's side can't challenge for a European spot.