"It was a great workout for us. The only downside was the injury to Stephane Guivarc'h early on but it's not serious. The lad went over on his ankle and we are disappointed it happened.

"I was delighted with Alan's first half hat-trick and young Paul also took his goals well. I was pleased with the way he was in position to follow up after Stephen Glass had his shot parried away by the keeper.

"It was a great work-out for us and I am glad we have helped Bray's finances."

Pat Devlin (an associate of Dalglish and his Irish scout for Liverpool, Blackburn and NUFC):

"We were well beaten, Newcastle were different class..... it was Ł70 million of talent against Bray Wanderers on our town turf and it was a fantastic exercise for everybody.

"Shearer is just world class and I'm pleased that Newcastle are beginning to look like a real good side and I think they have a great future ahead of them.'' 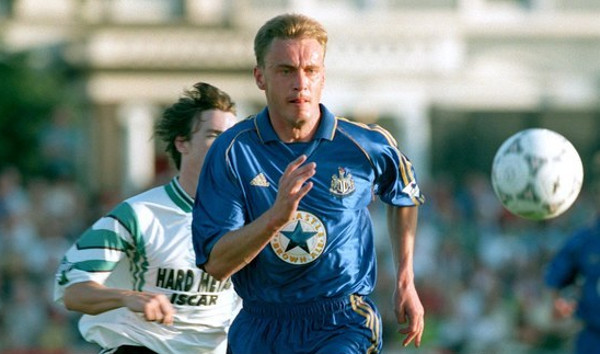 Alan Shearer took home the match-ball to remind him of his trip to the seaside and his first hat-trick of the season as Newcastle hit Bray Wanderers for six last night.

Before a crowd of 5,000 at the Carlisle Grounds the England striker showed just why he is worth Ł15m with a superbly executed hat-trick.

For the first time this season Shearer was partnered up front by World Cup star Stephane Guivarc'h but the Frenchman hobbled off after 11 minutes and was replaced by Paul Dalglish, Kenny's son.

Shearer's first arrived after just 13 minutes when Jody Lynch failed to cut out a long through ball from Gary Speed and the England skipper out-paced Philip Long before beating Alan Kane with a low shot into the corner of the net.

On the half-hour, after Bo McKeever had been yellow-carded for a foul on Paul Dalglish, Shearer added his second when he curled a 25 yard free-kick around a five man wall and into the far corner.

He completed his hat-trick three minutes before half-time when he found himself unmarked inside the box and met Speed's left wing cross with a powerful downward header that gave Kane no chance.

Dalglish jnr certainly impressed and rounded off a fine individual performance with two goals. The first came after 62 minutes after Stephen Glass' shot was parried by Kane, who then blocked Dalglish's first effort but had no chance with the Scot's second attempt.

His second came on the full-time whistle when he turned brilliantly 25 yards out and beat Kane with a sizzling right-footed shot.

Sandwiched in between those two Dalglish goals was the goal of the night from Newcastle's new Ł4.5m signing from Bayern Munich, Dietmar Hamann who cracked a brilliant 25-yard free-kick into the top corner of Kane's net.

Despite conceding six goals Kane had a superb game pulling off a string of top class saves to keep the score in single figures. But even he must have been happy that Shearer didn't appear for the second-half.

Bray had two chances to score a consolation goal but Don Tierney completely fluffed his header with the goals at his mercy while Shay Given produced a finger-tip save to deny Keogh in the 37th minute.