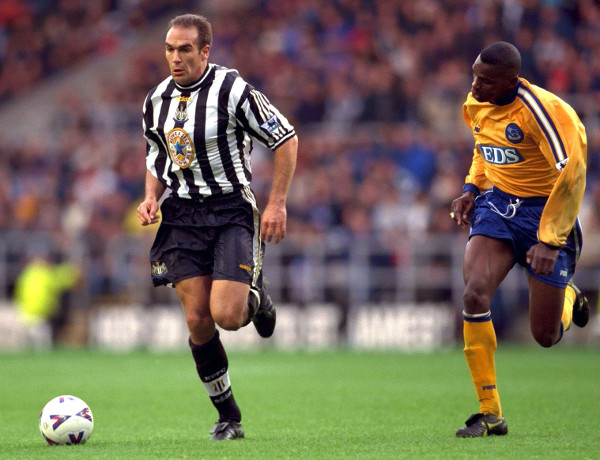 Whatever Alan Shearer said to Glenn Hoddle in the aftermath of the national team's midweek malaise, the statement made with the loudest clarity on the pitch at St James' Park yesterday did not come from the England captain.

The man who may, or may not, have taken exception to the managerial hand of Hodd had a quiet game as Newcastle were guided to victory by a Peruvian whose former mentor was allegedly helped by the hand of God. Nolberto Solano, nurtured at Boca Juniors alongside Diego Maradona, announced his arrival as a player of substance on the Premiership stage, setting up the two goals that took his team to victory with some vintage wing-play for Ruud Gullit's Magpies.

Solano, Kenny Dalglish's last signing for Newcastle, is not quite the finished article. Twice in the second half he was guilty of freezing when presented with clear scoring chances himself in front of the Derby goal. But the first-half trickery the South American conjured was altogether too hot for Derby to handle. It also warmed the cockles of the Toon Army on a bitterly cold Tyneside afternoon. And it may have given Shearer food for thought as he ponders his future at club level.

Newcastle may be far from the trophy-winning material the Ł15m man wants to see at St James' Park, as their less than sparkling second-half confirmed yesterday, but in the 23-year-old Solano he has a winger capable of supplying him with goalscoring ammunition.

Solano, signed by Dalglish for Ł1.2m, can certainly feel safe from the "battering ram" Gullit has promised to take to his team. Steve Watson has already been shunted out of St James' Park, possibly to make way for Christian Ziege, whom Gullit hopes to prise from Milan. The Newcastle manager has yet to enter the transfer market but can expect a little more spending money than the Ł1.4m Jim Smith was granted in the three years he spent in charge at Newcastle.

The Bald Eagle returned to the Magpies' nest yesterday and he might have enjoyed a happy return on the occasion of his 58th birthday had Dean Sturridge not wasted the gift of a chance presented to him by Nikolaos Dabizas in the fourth minute.

It was not Smith's day on the pitch as his Rams took a first-half battering. Robert Lee held sway in midfield, but it was Solano who did the most direct damage. The right-winger supplied two goals in a dazzling five-minute spell and only the woodwork prevented a third. The cross he whipped in from the right, after a short corner by Stephen Glass, was an invitation for Dabizas to head his third goal of the season and the Greek defender duly obliged as he soared above the Derby defence on the six-yard line.

That, however, was nothing compared with the sublime cross-field pass Solano delivered four minutes later, leaving Glass free to flick a goalscoring shot over Russel Hoult from the left angle of the Derby penalty area.

Smith's players could have been excused for thinking the South American might not relish the wintery north-east conditions when he appeared for the pre-match warm-up wearing mittens. But, unlike the last Peruvian of note to make the trip from Lima to England, the scarf-wrapped Paddington Bear, Solano is seemingly made of sterner stuff - if not stuffing.

His gloves were off when kick-off time came round and, within a minute of his second assist, he ripped through the Derby defence again. From the right by-line, he teed the ball on to the head of Paul Dalglish but the young Scot's effort was tipped on to the post by Hoult.

Derby made it into the second half without any further damage, but they ought to have been finished off in the 68th minute, when Andy Griffin found Solano unmarked on the six-yard-box. Newcastle's new hero shot wide, however, and his team endured a nervy final 17 minutes after Paulo Wanchope headed down a Lee Carsley free-kick and Deon Burton bundled in a goal that gave his manager a small birthday consolation.

Gullit praised Newcastle's performance as their best since his arrival two months ago. What Shearer made of it all was unclear. He left without passing comment, keeping his thoughts securely to himself.