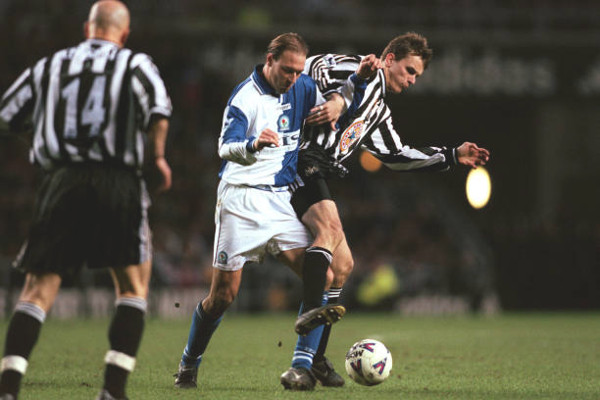 The visitors produced a brave rearguard display to keep out a United side which went on the attack from the off and continued in the same vein for 90 minutes.

But while wide men Stephen Glass and Nolberto Solano caused trouble throughout they were never able to find the killer ball.

Former Magpie Darren Peacock in particular was in fine form and when he was beaten, goalkeeper John Filan proved up to the task.

Filan himself was beaten just once by Glass' 14th-minute shot which came back off the bar. But United goalkeeper Shay Given also had the woodwork to thank after Ashley Ward did exactly the same two minutes earlier.

And while Gary Speed, who was later stretchered off, and Dietmar Hamann held sway in midfield they simply could not find a way through to secure a home quarterfinal against Everton.

Alan Shearer returned from suspension to lead the line in place of Frenchman Louis Saha, and Didier Domi got the nod ahead of Andy Griffin in defence.

Newcastle old boys Keith Gillespie and Peacock, however, were handed a chance to show their one-time team-mates exactly what they can do.

Newcastle dominated the first half, although the twin threat of Chris Sutton and Ashley Ward kept the excellent Steve Howey and Laurent Charvet on their toes throughout.

Indeed, it was Ward who came within inches of opening the scoring with just 12 minutes gone when Sutton got above Charvet and flicked the ball into the former Barnsley striker's path.

Ward spotted Given off his line and sent in an early lob which left the keeper for dead but, fortunately for the Irishman, came back off the crossbar.

But Glass matched this feat within two minutes as he met Solano's deep cross with a left-foot strike which beat Filan but also rebounded off the woodwork.

If Filan was unable to do much about Glass' effort, he was at his best to block Solano's close-range effort as Temuri Ketsbaia left a trail of defenders in his wake with a twisting 17th-minute run.

The Georgian was causing all kinds of problems and his 23rd minute lay-off to Speed allowed the Welshman to fire in a low drive which Filan did well to stop after defender Marlon Broomes got the faintest of touches on the way through.

Speed tested the keeper with a similar effort two minutes later and Jeff Kenna had to get in a good tackle to deny Ketsbaia on the half-hour mark after Given, Solano and Hamann linked well.

Ketsbaia went just wide with a right-foot drive 10 minutes from the break but Filan earned his corn once again on the stroke of half-time as he got down well to keep out Speed's header from a Solano corner.

Shearer looked to have found a yard of space inside the box a minute after the restart as he ran on to Ketsbaia's back heel, but although he was dumped to the ground by Broomes' tackle, referee Dermot Gallagher waved play on.

Solano and Hamann almost unlocked the Rovers defence on 50 minutes with a deft exchange of passes but defender Gary Croft intervened just in time.

Sutton's late challenge on Speed a minute later looked to have cost him a red card but it was Gallagher who was blushing as he quickly substituted it with a yellow.

Filan produced another good stop five minutes later after Glass got in on goal from Speed's header but it was Given who had to be alert when Rovers substitute Nathan Blake dived to head Ward's cross towards goal.

Glass went close 18 minutes from time after Filan had to leave his line to prevent Shearer from reaching Warren Barton's cross.

But his side were dealt a major blow five minutes later when Speed was stretchered off with what looked like a serious injury after a last-ditch tackle deep inside his own penalty area.

Peacock's 84th-minute challenge kept out Hamann just when it looked like Solano had carved the decisive opening.

Blackburn went for a late winner as the time ran out but United were in no mood to surrender their FA Cup dream.