"I think we have only lost seven of the 23 games since I came here, but we haven't been able to turn enough draws into wins." 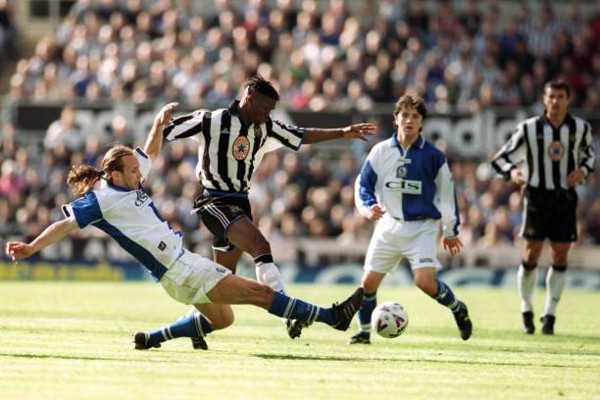 For their sakes it is to be hoped the Manchester United players celebrated in some style last night: with the European Cup final on Wednesday week in mind, presumably they will not be permitted a boisterous session next Saturday once they have completed their third double of the decade.

That is certainly one view taking hold on Tyneside. Newcastle United fans may be understandably giddy and hopeful about Wembley but there is a shudder of cold realism every time the facts are re-examined. Yesterday's freezing sunshine was apt weather indeed.

Newcastle have not won in the league since April 3 at Derby County, eight games ago, and though they did win the FA Cup semi-final in that spell it was courtesy of Paul Durkin's failure to see Nikos Dabizas's hand-ball until 24 hours after it happened.

It is not the kind of record that will have Alex Ferguson reaching for the whisky, and Ruud Gullit has already said Newcastle's subsidence has caused him alarm. He referred to this game beforehand as 'meaningless', and those searching for a clue to his far-from-obvious Wembley line-up received few hints here.

Steve Harper, who made two excellent saves - one in injury-time from Lee Carsley that denied Blackburn a second away win of the season - seems certain to play at Wembley rather than Shay Given, and Andy Griffin may be handed the job of marking Ryan Giggs.

But up front, where Alan Shearer and Duncan Ferguson were both missing, doubts remain. Silvio Maric looks lightweight, although he did hit the crossbar, and Temuri Ketsbaia was substituted yet again.

Nearly all of Newcastle's attacking play came from midfield, where Norberto Solano had a fine first half and from where Dietmar Hamann delivered the 51st-minute equaliser, a rasping 30-yard drive that meant Tim Flowers' first touch after replacing the injured John Filan at half-time was to pick the ball out of the net.

Filan had made vital blocks from Solano and Hamann and Newcastle's casual domination was such that, when Jason Wilcox scored in the 38th minute, it was Rovers' first real attack. Ashley Ward ran around the Newcastle defence without a challenge and cut the ball back to Wilcox, who drove it in comfortably from 10 yards.

'1-0 to the Nationwide,' sang the Rovers fans and afterwards Brian Kidd addressed his club's new status. 'There will be no rest,' said the Rovers manager. 'There is a lot of hard work to be done. I'd rather be rebuilding in the Premiership, but it's lost.'

Gullit chose to accentuate the good news initially, mentioning European qualification and the chance of winning silverware, but he then gave his players a warning. 'The FA Cup has been getting in the way and the players have saved themselves unconsciously,' he said. 'So I expect a team that plays as champions next Saturday.' Don't count on it.