49 mins: Marco  Delvecchio carried the ball into the left hand side of the United area, and seemed to be heading away from goal when a mistimed lunge from Laurent Charvet sent him tumbling.

There weren't too many complaints about the spot kick award and Francesco Totti stuck the ball to Steve Harper's right, agonisingly close to the keeper's outstretched fingers. 0-1 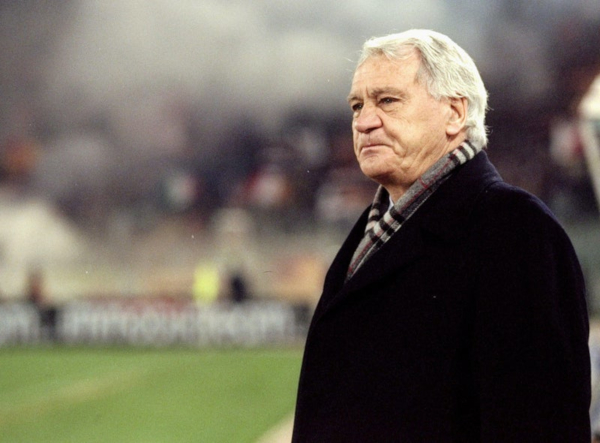 (This performance was) "as good as anything we've done all season." 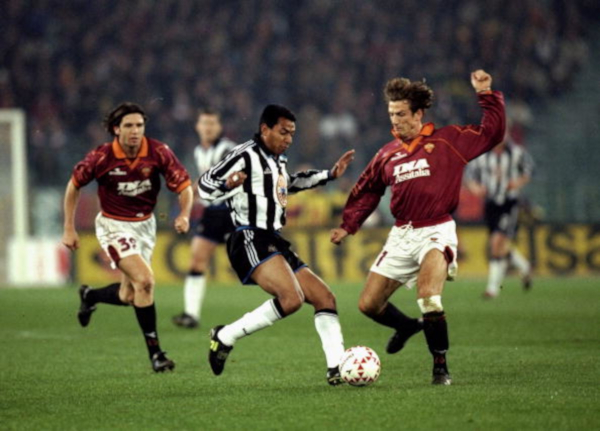 United's European Tour continued with what for many was a dream pairing, albeit one which was widely expected to mark the end of our involvement in the UEFA Cup for this century.

The "wheel of fortune" pricing policy employed by the club (think of a number, double it, add some more) meant that most fans made their own way to the Eternal City, including your gallant reporter, who took a hand picked selection of inebriates, urban terrorists and somebody's mum via Gatwick.

One stress-free flight later, complete with obligatory oohs and aahs as we passed over the Alps (and obligatory free gin and tonics courtesy of the lovely Heidi), a calm descent was made to a sun-bathed Roma. Train transfers to the city were accomplished without problems, and following a swift disagreement over which way up the map was, the pre-booked hotel hove into view.

Early suggestions of a cultural interlude at some old ruins or other were quickly dismissed, as sustenance was required urgently. One quick stroll and gawp at a church later, and the entourage was shoehorned into a small restaurant, much to the bemusement of the staff.

As time marched on towards our appointment with the local police and some pre-arranged transport to the stadium, an executive decision was made to yomp towards our pickup point, via strategically placed refreshment stops. It was at this stage things, which admittedly had been far too normal up until this point, started to advance into the land of the strange...

Firstly, a well-dressed middle-aged local woman approached us, accompanied by a small child. Half expecting a tirade of abuse, we were totally unprepared for the instruction that we "must break the arse of the Roma" - obviously a Lazio fan still smarting from their recent 1-4 derby humiliation.

Next, our boarding point was reached, which turned out to be in the middle of a dimly-lit park, away from the bright lights and bottle openers of Roman drinking dens. Or so we thought.

An eagle-eyed scout spotted a bar sign directed into the bowels of the earth, and said bar was located, in the back of a metro station, at the far end of a half-finished tunnel. The owner hadn't banked on the intrepidness of the Geordies, and sold his entire beer stock around 90 seconds...

Refreshed, our gallant boys made their way back to the park, stopping to water the trees en route. Buses were boarded, and the jaunty police-escorted cavalcade made its way towards the stadium, onboard singing and dancing bringing curious locals on to the streets to witness the procession.

Once at the ground, two things immediately became apparent.

1) In stark contrast to previous Italian jaunts, the police were amiable, with an absence of guns pointed in our direction, and police dogs seemingly not fitted with elastic bands round their todgers.
2) There were a fair few Peruvian gentlemen in attendance, for example: 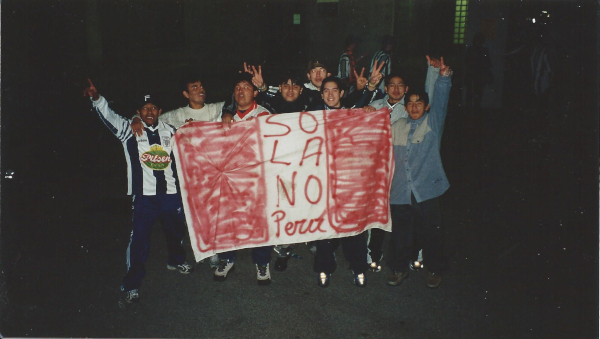 First impressions of the stadium were breathtaking. At 82,000 places, not the biggest ground our European excursions have brought us to in the 1990's but the symmetrical curved nature of the single tiered stands was mightily impressive, as were the gigantic steel struts that held the roof up without the need for vertical pillars. Yon big TVs were canny an all, like.

The usual backless bucket seats were in our section, adjacent to a corner flag. Aforementioned friendly constables also allowed the now-familiar draping of flags over fences and the unoccupied front rows of seats, while some supervised exchanges of scarves were allowed with home fans.

As kickoff time approached, we were treated to a televised double act via the big screens at each end of the ground, featuring Roma's answer to Jim Carrey alongside what looked like a cross between Rula Lenska's daughter and a nightclub hostess, complete with spangly frock.

Apparently this lassie has promised to get her kit off in the centre circle if Roma capture the league title. Christ knows what she'll do if they win the UEFA Cup..... 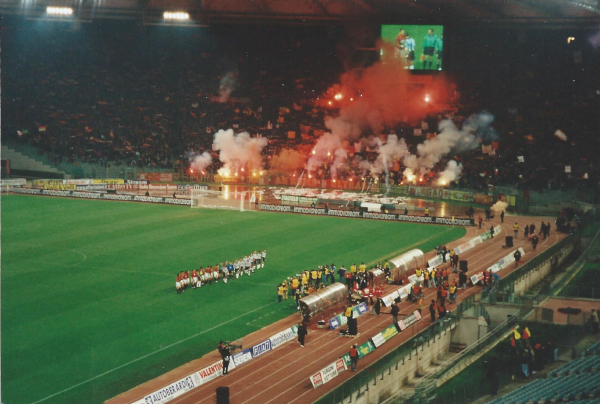 With the crowd continuing to build, but obviously well below capacity, the noise level increased as the teams were announced, and then a firework display signified their arrival on the field.

The bizarre sight of the local fire brigade flooding the running track at each end of the ground some time earlier was now starting to make sense...

Brief impressions of the match were that there wasn't a lot in it barring the unfortunate penalty. The home side had more chances but never looked dominant, and the Roma fans were very quiet for long periods as Bobby's boys broke up a succession of attacks with no little composure and tenacity.

The referee, who had been adequate in the opening period, appeared to have found a suitcase full of lire in his dressing room at half time, such was his favouring of the home side thereafter.

This reached it's disgraceful conclusion in the final seconds, when Solano was clearly struck by an opponent, only for a yellow card to be grudgingly produced when the offence warranted dismissal.

Perhaps spurred on by the moral support of his kinfolk, the wee Peruvian featured heavily, getting involved in what Ron Atkinson would call "situations", and generally running round like he had a firework in his shorts.

Following the final whistle, Barton tossed his shirt to the masses, which spurred on Pistone to do likewise. Unfortunately the Italian lacked the necessary finesse to actually clear the security fence and had to take a second go. By contrast, England's number one/nine wended his weary way off the pitch with yet another swapped shirt to add to his collection.

Inevitably, prolonged post-match discussions took place, glass in hand, in a bar masqueraded as an ice cream shop and mini disco. The mood was predominantly one of optimism tinged with relief and unlike Zurich, there were no reports of trouble - either with the locals or between ourselves.

Come the morning, and the inevitable sightseeing was accomplished (through half-closed eyes in some cases), before retracing our steps to the airport and on to Gatwick Only the landing was worthy of note, our pilot looked to be attempting a victory roll seconds before hitting the runway.

We'll save the acrobatics for the home leg if we get through, thank you.