"He's (Kluivert) got to play a lot further up. He wanted to come deep to get a touch of the ball but he did play well.

"Neither Kluivert nor Butt were going to electrify the crowd today because they've only been at the club a week.

"They're not in their best condition by a long, long way. When Kluivert came last Monday, that was his first day's training for three-and-a-half weeks.

"Nicky Butt has done five days with Manchester United out in America and then got on a plane last Monday.

"We saw him on Thursday and he's been out of training.

"He's not got the greatest of movements and he's lost a bit of pace on the sprint.

"So he's a bit of a worry for us so we've only got one really fit striker at the moment and that's Alan.

"You saw Alan today and it's difficult for Alan to play two games in two days at this level. But he gave us an hour and that's Alan, he's given his best."

When asked about comments made by the Chairman about this being Bobbys' last season:

"I am unaware of anything that has been printed or spoken about on radio or television about myself. Until I find out about the situation it would be inappropriate to comment on that.

"You've shocked me, you've come at me out of the blue. I wish to address the whole situation with the chairman face to face then issue what we have to issue.

"I need a dialogue with the chairman."

"It was a different feeling having played six years in Barcelona, now I have another jersey. It's different but it felt good and the reception for a player here, and I could say this a thousand times, is the best.

"I'm feeling very good. I only started training last Monday and I'm not 100% fit. I think with the game on Wednesday it will increase even more.

"That was the first time I played alongside Shola Ameobi and it's difficult to say something about the partnership yet, but my impression was good. I knew that Alan Shearer and Shola Ameobi were strikers of high class and sure I was impressed in training, and I hope they had a good impression of me.

About his late chance:

"I didn't head it so well. All of a sudden the goalkeeper came at me and I wasn't able to get a proper contact." 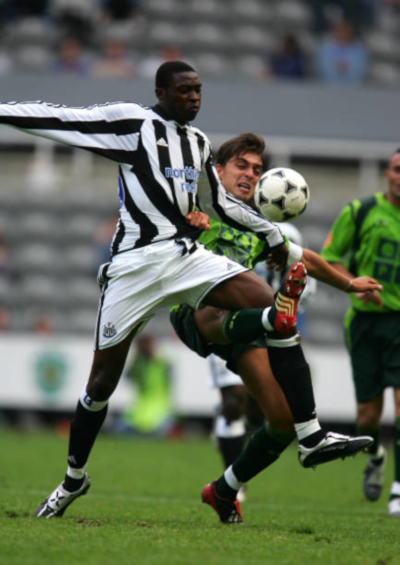 24 hours after their encouraging performance against Rangers, Newcastle served up a simply awful 90 minutes on Sunday afternoon losing to Sporting Lisbon - who in truth weren't much better.

Patrick Kluivert's much-anticipated debut came on the hour when he replaced Alan Shearer, but neither the Dutchman or any of his colleagues looked remotely inspired in what was an instantly forgettable afternoon.

United lined up with one surprise in defence - Robbie Elliott partnering Bramble in the middle. Shearer and Shola joined forces up front, with Milner and Brittain on left and right wings respectively.

However, all the two wide men managed for the most part were a succession of aimless crosses in the vague direction of the Lisbon box.

And it's almost embarrassing to admit that our most rewarding tactic appeared to be Bramble's long diagonal punts forward to Milner. The only midfielder who enhanced their reputation in this game was Robert - who didn't play.

Things looked to be starting well when Ameobi brought a fingertip save out of Ricardo after only 40 seconds. However that early promise soon faded into a mundane afternoon as we looked incapable of finding a higher gear.

We did finally begin to get the ball within sight of the visiting goal after the break, but a header over the bar from Shearer and a blocked Bowyer shot were the closest we came until four minutes from the end, when Kluivert's looping header was blocked on the goalline by a defender.

So Lisbon - who should be known as Unsporting after their  antics - took the first and probably last NewcastleGateshead hub cap, sorry Cup. Kieron Dyer meanwhile was voted man of the tournament - an utterly inexplicable choice, given his aimless 50 minute contribution to this sorry spectacle.