"We started the first twenty minutes on the back foot, they were the better team at that point.

"They go the goal to go in front but then for the next twenty five minutes we started to get at them.

"We got territory we played in their half and we created a golden opportunity for Marc Walton that we didn't put away.

"I felt as half time approached we could get back into the game but they scored in the last few seconds and that put a different complexion on the game - an untrue complexion perhaps.

"We had a go at them in the second half but we squandered three or four good chances. Overall I was disappointed with the display, our passing was poor."

"It's disappointing for Craig. It looks like a pull, so we'll have to have the injury assessed and see how he is."

Two first half goals from the home side meant that Tommy Craig's reserves left St.Andrew's empty-handed on Tuesday - and added a further name to United's sick list.

Although United were able to call upon Australian international defender Craig Moore for the first time since early August his comeback lasted only 45 minutes before he limped from the field at St.Andrew's and failed to reappear for the second half.

City had taken the lead on 17 minutes, when David Dunn set up Andrew Barrowman to shoot on goal and the Glaswegian-born striker powered his effort past Tim Krul. 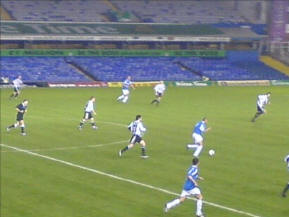 And the Blues doubled their lead seconds before the interval, when Neil Kilkenny shot home from distance.

Kilkenny was the youngster who made the headlines last month when a handball saw his Premiership debut cut short by a red card.

The Magpies renewed their efforts to get back into the game in the second half, with the woodwork preventing Michael Chopra from scoring in his fourth successive reserve outing, on 52 minutes.

And nine minutes later the striker had the ball in the Blues net, only for an offside flag to deny him and United.

PS: There was a late change to the Magpies lineup, with Shola Ameobi being withdrawn from the side, despite his inclusion on the teamsheet.

This was subsequently confirmed as being due to Michael Owen pulling out of training and being doubtful for Sunday, Ameobi being held back as cover.

Marc Walton stepped up from the bench in Shola's place, leaving United with only four subs.