"It is a case that too often this year so far we have shot ourselves in the foot and lost games we shouldn't have. We need to pick ourselves up off the floor again and stride on forward.

"Undoubtedly we should have won because of the superiority we had in the first half, but when you do not take your chances you always feel it may come back to haunt you.

"I thought we were in control in the first half and the second half was more even. I know Steven Taylor made a fantastic goal-line clearance but we had chances at the other end."

"It's the first time we've got a bit more than we have deserved - it could have been a draw.

"There is more relief because there was more tension around the ground and it got through to us in the first half because so many of our lads have grown up in the area. We are almost seen as the underdogs here or perceived as being the smaller club. I think everybody went out there with a point to prove and I am delighted for us.

"I always said I'd play for Boro if they came in. I always wanted to play for them as a boy.

"There were a few clubs interested in the summer. I listened to them, but when I met boss Gareth Southgate and the chairman Steve Gibson, I just said 'This is for me'.

"I played some good football at Newcastle, that's what got me a move to Spain.

"The Geordie fans really get behind you but I'm happy here. I love the place, it's my hometown and I'll always live here." 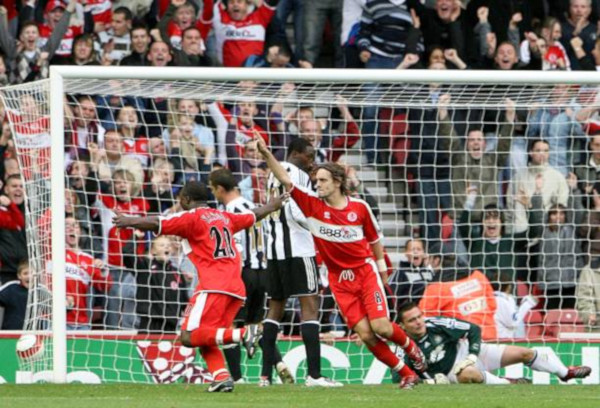 Aiyegbeni Yakubu won the battle of the Nigerian strikers at the Riverside on Sunday, as we paid the price of missing a quartet of decent chances and lost our third league game on the bounce.

Our own Nigerian-born forward Obafemi Martins came closest with a first-half effort that glanced off the smoggies crossbar, while both Milner and Duff spurned great opportunities to put us ahead after the break.

However our domination of the play counted for nothing when Yakubu headed in a Downing corner with just five minutes remaining, giving Boro only their second success over us in the eleven Premiership meetings on Smogside.

Thursday's UEFA Cup goal hero Antoine Sibierski limped off with an ankle problem on the half hour, meaning that Ameobi appeared from the bench to resume his partnership with Martins.

Between the posts, Harper was cleared to play and looked far more mobile than he had done on Thursday. Srnicek was on the bench and received a great ovation when he warmed up.

Roeder opted to include Craig Moore in central defence in opposition to his fellow countryman Marc Viduka, with Taylor keeping his place and Ramage again required to fill in at left back - Babayaro in the travelling Toon party but not even named as a sub.

Emre's dodgy back meant a recall for Butt in midfield alongside Parker, with Duff restored the the left wing and Milner maintaining his place in the side on the opposite flank.

An entertaining first half saw us playing the ball on the floor to good effect, former Magpie Jonathan Woodgate looking uncomfortable when faced with the pace of Martins.

However despite warming up both Rossi and Zog for the whole of the second half as we gradually lost our way, Roeder delayed making a change until we conceded a goal.

While it's frustrating not to have been able to keep a clean sheet, on this occasion the defence cannot be hung out to dry for us getting nothing from this game.

To have played the better football is of little consolation, our continued failure to score when in the ascendancy ultimately being punished when Boro found a way through.

Goalscoring - and the lack of it - is becoming a critical issue and it's unacceptable to go into games knowing that conceding a goal will condemn us to a draw at best.

The result leaves us languishing in 16th spot, only three points away from bottom side Charlton and means that we've failed to score in four of our five away games in the league this season.

Worse still, we've now collected nothing from the away games at Villa Park and the Riverside - two venues that have proved a reliable source of points during our Premiership years.

Wednesday's Carling Cup meeting with Pompey is of limited significance, but the upcoming pair of home fixtures against Charlton and Sheffield United are quite simply must-win games.

No excuses, no good performances without reward. Just six points.

Anything else puts us - and Roeder - in a position of extreme pressure. And as followers of this club know from previous experience, once we're at that point, things start to unravel.