"It's been a long wait for Michael and Shola. He has been out with that hip injury for a long time as well.

"We just hope we keep them fit and get them fitter and stronger as pre-season goes on because they are a handful for anybody in the Premier League if they are firing on all cylinders, certainly with their finishing qualities.

"That gives us options for goals. That's what you need to win football matches.

"Joey (Barton) was very good, and that's him just taking it easy. I think he will be a driving force for the team. As a footballer he's got lots and lots of talent.

"Results don't matter in pre-season friendlies - I didn't win one friendly at Bolton last year. But you do want your strikers to score goals.

"David (Rozehnal) looked very comfortable on the ball and as time ticks on and the competition becomes stiffer, he will get more of a test.

"David is going to be fine. He is an intelligent man and a really dedicated professional.

"If he learns as quickly as he needs to, he will be okay. We have seen he is a talented footballer as well as a good defender."

"It was great that Sam was able to bring the full squad down. Obviously in the end that bit of quality has come to the fore and with Shola Ameobi and Michael Owen coming on it was it was just too much for us.

"They have pace as well, especially bursting from midfield, and we couldn't really handle that – but that is what you pay for.

"It was terrific for us, we set the tempo early on and Newcastle responded to that.

"There was a lot of hard running and a good work ethic from both teams.

"They had a lot of quality but for some periods of the game we held our own and I am very pleased with the work we put in to it.

"You have to remember this is the first game and we're not going to get carried away; we're not disappointed and we're not overjoyed, we just want to get through these games with minimum injuries."

"Although the Newcastle fans were ribbing Jan for his mistake, rest assured he is a terrific goalkeeper." 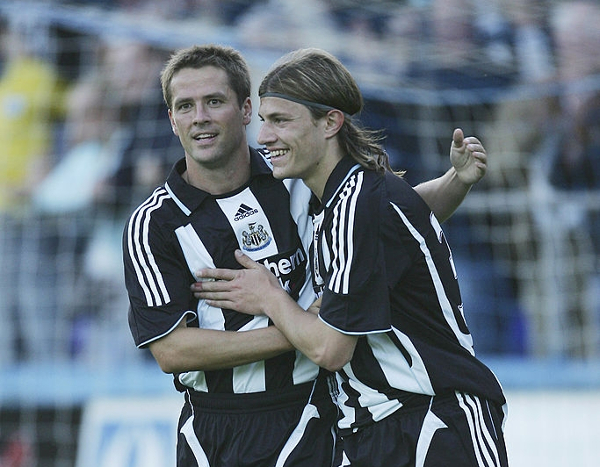 The Sam Allardyce era got underway at a sunny Victoria Park on Tuesday evening, with what was ultimately a deserved victory for the black and whites.

Playing on a perfect surface and with former Magpies boss Sir Bobby Robson watching from the stand, United lined up in their home kit featuring newly-announced squad numbers but no names.

However, their strike force of Obafemi Martins and Andy Carroll failed to break the deadlock in the opening 45, although they both came close - as did new boy Joey Barton with a diving header.

At the other end Shay Given was hardly troubled, although 'Pools made some headway down the left flank against Kieron Dyer and Stephen Carr, only to be let down by some poor crossing.

A raft of half time changes brought Shola Ameobi and Michael Owen into the action, with the latter not far away from netting with his first touch in the opening seconds.

It was the League One side though who went ahead on 49 minutes, James Brown finding space to latch on to Matty Robson's ball to beat Steve Harper with an angled shot at the far post.

The lead lasted just over five minutes though, before Ameobi took Dyer's through ball and evaded debutant Danish 'keeper Jan Budtz before slipping the ball into an empty net - and ignoring the pleas of Barton to leave it for him to convert.

And before the hour the visitors had the lead, as James Troisi cut in from the right and either sliced a rotten low shot or played a perfect ball infield for Michael Owen to convert.

In what was turning out to be an entertaining contest Pools then forced a corner, which former Magpie Robbie Elliott swung over for Ben Clark with a near post header.

Referee Oliver however spotted some pushing and ruled the goal out - something which didn't deter Harper and Carr from animatedly discussing our positional shortcomings.

Further goals looked likely, Paul Huntington heading over from a Charles N'Zogbia corner and some good work from Shola that created a shooting chance out of nothing.

Newcastle eased further ahead on 72 minutes though, as Troisi again played the ball in for Ameobi to fire home his second of the game - with a significant assist from the Pools 'keeper, who spilled the shot into his own net.

The final stages saw various unfamiliar graduates from our junior and reserve sides get a run out as the clock ran down and we ended the game with nine Academy graduates on the field (Owen and Solano making up the numbers).

So, nothing we really didn't know before: Barton is eager, enthusiastic and looking to impress and David Rozehnal looked decent enough but requires reinforcements round him.

The display of Ameobi was a bonus after such a torrid time with injuries and it was heartening to see him apparently relaxed and enjoying himself ahead of the battle for striking spots this season.

And after the never-ending coverage of club related matters since the Watford away game, it's a relief to have something on the field to write about.