"This is the hardest pre-season I've had since being at Newcastle.

"I want to be a coach in the near future so I find Sam's methods very interesting. The only problem in Peru is there isn't much money to invest in the game.

"I'll definitely keep a lot of these ideas for when I move into management. You have to keep up with the new ideas. We have our own personal masseur and we were wearing heart monitors.

"In terms of tactics, there are no secrets anymore, so Sam's ideas might give us an advantage.

"Wearing the heart monitors is bad news for us because they show just how hard you've been working out - the manager can see who's been cheating, but it pushes us even harder.

"I'm only 32 and I there are other players playing until they are 36 or 37. They might play in different positions, different conditions, but there is no reason why I can't go on longer."

"It's always nice to get a goal and take the lead and it was slightly disappointing in the end, although the result didn't really matter, because it would have been nice to keep a clean sheet. We've learned a lot, we've still lots to improve on and I'm very happy with the fitness both with and without the ball at this stage of the season.

"I don't really want to talk about individuals, the whole team played really well. I was happy with the shape when we didn't have the ball, and we just need that cutting edge when we have it. We got in to situations where we could have played the killer ball, but we still have another three weeks to go for that.

"The sharpness in front of goal tends to be one of the last things to develop in pre-season. I work from a solid base, making sure we're nice and tight, because the fewer goals you concede, the better chance you have to win games. Once we are there with that, we look at what we do in the opposition half. I can't see me changing that, that's the way I work.

"It sends us away to Scotland on a high. Up there, we will top the fitness up again and do some good work with the football, away from everyone, and we'll build up again for the games against Queen of the South, Middlesbrough and Blackpool.

" All of those are there to lead up to the most important game since we've come back, and that's Walsall. That game is getting nearer, we're really looking forward to it and we can't wait for these next three weeks to fly by." 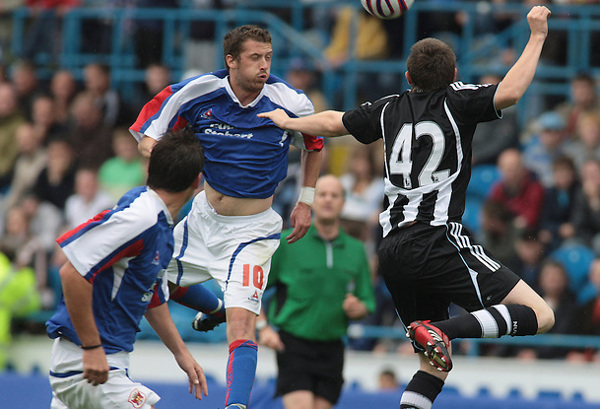 A damp afternoon in Cumbria was saved from being a total washout by a fine Nobby Solano strike in added time to send the travelling support away with something positive from a drab encounter.

After a scoreless first half the home side took the lead on 56 minutes, as a deep Mark Bridge -Wilkinson free kick from the left flank was headed in by Danny Livesey - who made six appearances in the Bolton Wanderers first team under the management of Sam Allardyce.

And with Newcastle making widespread changes in the second half to leave a virtual reserve side on the field, they barely threatened a goal until Andy Carroll flicked on James Troisi's left wing cross for the Peruvian to chest the ball down and finish in style.

On a day when little went right for the Magpies, nobody appeared to have brought their shooting boots with them and an attempt at 4-3-3 simply had too many square pegs in round holes.

One bright spot was a decent debut for Geremi, who came on to steady things and was as close to scoring as anyone in black and white with a free kick.

However, our well-documented defensive shortcomings were again evident, with N'Zogbia filling the left back berth to no great effect and Carr again encountering some hostility from Newcastle fans.

The game was briefly held up in the second half as a trio of home followers attempted to get out of their section of the stand adjacent to the away following.

They were quickly overpowered by a large number of stewards and led away, but some trouble was reported both outside the ground and in the city centre. Ten away followers were arrested and subsequently gave guilty pleas to charges of affray.