"Michael was not there today but he is not really back yet.

"It could be five or six games before you see the sharp end of Michael Owen.

"If Steve McClaren gives him some part of the Germany match this week that will be a great help and obviously we hope there will be no injuries from that."

"I thought we were the better side and it was a really good performance.

"The players were very strong and very determined and we should have won it.

"We got a point to show for it, but we are very disappointed in the dressing room that we haven't taken it.

"There was a bit of pressure to get something today, hence that disappointment.

"With it being Newcastle's opening fixture at St James', you might have been tempted to say let's just get something, but the way it went we are disappointed.

"John got hit in the chest and it really took his breath away.

"He was in a bit of trouble on the sidelines but he was reassured by the medical staff.

"He couldn't get his breath for some considerable time but once he calmed down he was fit to start again. It knocked him a little bit and he struggled, but he's OK."

There was a third consecutive clean sheet against Newcastle for Villa debutant Scott Carson, the custodian doing the trick both home and away for Charlton last season. 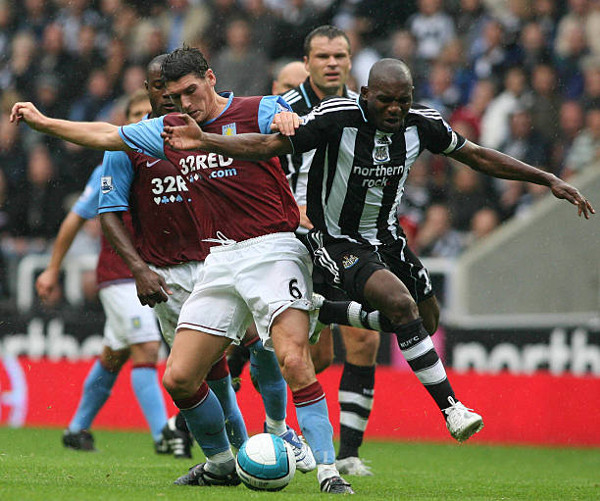 The last Premiership game here had ended with disillusioned fans flinging their season tickets on to the pitch, but 105 days later those stands were filled again (almost) as a new-look Newcastle took to the field, amid a blanket of paper streamers and a mood of optimism verging on rebirth.

Gone from the SJP scene were a host of familiar characters - Glenn, Freddy and Kieron to name but three - and an awful lot of men from the motor trade and elsewhere, judging by the amount of spare seats in the Directors Box....

Some things didn't change though, with Owen, Ameobi and Martins all looking as unlikely to break our Tyneside goalscoring famine as they had against Blackburn Rovers three months previously.

New beginnings are nothing new here of course, as are false dawns.

Having scored goals against Bolton on almost every occasion that we hit the target, today we singularly failed to achieve the feat of testing debutant 'keeper Scott Carson - save for one venomous volley in the first half from Rozehnal.

The rest of the time we looked disorganised, lacking in pace and devoid of ideas.

But while those are disappointments, they're hardly shocks surely? Can anyone explain what point the faction of fans who booed the team off at the end were trying to make? Exasperation that their 93 minutes of contributing to a vocal barrage had failed to produce a goal? I think not.

In the absence of an obvious grudge against owner or chairman (yet), it's either directed at Allardyce, the half of the team who were here last season or the half that were making their home debuts. Sorry, but none of that makes the slightest sense.

Regardless of who had come in to replace Roeder, a reconstruction job of monumental proportions was required: the casting out of failures, the acquisition of sufficient numbers of new faces and the luring of those quality players that turn an average team into a good one.

That job is well underway, but remains a work in progress and that was amply demonstrated by the lineup today.

Playing two naturally defensive midfielders in midfield at home - Butt and Geremi - echoed the fearful strategy of Roeder in pairing the former with Parker.

But with Emre still to kick his first ball since April, Duff and Barton fettled, Dyer thankfully gone, Solano dreaming of the Circle Line and N'Zogbia at left back there wasn't much else in the cupboard marked midfield. Pattison? Luque? Troisi?

Milner did his best to try and provide some sort of service down both flanks for the waddling Viduka (twice the phrase "fat Aussie ba..." was involuntarily summoned and suppressed - old habits die hard), while Oba looked like he was reading his treasure map upside down.

Maybe Smith was meant to try and reprise former days in taking knockdowns from the burly striker rather than the Nigerian, but neither seemed to be aware of that and consequently neither positioned themselves within range of Viduka - although they did stand on top of each other on a couple of occasions. Early days.

With no less than four home debutants and a fifth coming off the bench, this pitch could have more suitably been ringed with warning signs and bollards, rather than digital clocks and revolving advertising boards.

A sixth new face  - the first genuine left back we've bought this century - isn't in the team yet.

Like some half-built flat pack furniture, it's open to question exactly what we'll end up with once all of the parts are bolted together.

However Martin O'Neill's team of all the talents hardly put us to the sword - although it will have been noted by future opponents the unease that a succession of slightly ragged crosses pinged into our area caused in the opening stages.

The Villa boss seems to have some new specs for the new season - given his lack of progress in the transfer market thus far, his previous pair may have been smashed as he banged his head against a wall in frustration.

Harewood and Reo-Coker for a combined Ł11.5m? I know that they're both English - but so are Status Quo. You wouldn't pay in jam jars to see either play.

The first game of any season here is an occasion when things either get off to a cracking start (Ferdinand's debut v Coventry, Shearer's opener v Wimbledon) or it's all a bit arse first (Alan Brown for Shrewsbury or the Premiership opener against an Ardiles-led Spurs).

This game was reminiscent in some ways of that latter 1993 opener, when we looked short in many departments, uneasy in general and lacking in what were perceived at the time to be qualities vital to survive in the top flight.

All in all, a massive disappointment after so much of a positive pre-match vibe. But we recovered and improved as players started to gel and others were introduced to the side.

And at least Allardyce took a point from his first 45 minutes in the home dugout here - 1999 against Villa anyone?

Debutants a-plenty (but Harper in goal) and a referee who took a profound dislike to our centre forward (Rennie dismissing Shearer for nothing more than Viduka did today). Result? a 1-0 loss.

And a quarter of a century ago, an excited crowd jammed into this ground to see yet another new era for the club, as Kevin Keegan inspired a team of good, bad, indifferent, old and new players to a 1-0 success in what was a bloody awful game.

The sun shone, the fans sang and everything looked tickety boo. However, the legacy of years of mismanagement on and off the field meant that the instant success craved by all and sundry was a little delayed in coming along; two seasons in fact.

Twenty five years on the stakes are much, much higher and the job no less demanding. He's not the messiah, just a bloke from the West Midlands looking to put right what's been wrong more times than right in all our lives. Support him.