8 mins A first goal in nine for Michael Owen, who poached one with a close-range effort at the Leazes End, after Duff's left wing centre was knocked back into the six yard box by Milner. 1-0

31 mins Defender Claudio Cacapa became the first Newcastle player in living memory to score twice in a season from corners when he nodded home N'Zogbia's corner from the Milburn side towards the nearest post. 2-0

68 mins Some effective route one work, as James Milner profited from Viduka's flick on to rattle in a fine low shot that brought an applauding Keegan to his feet. 3-0 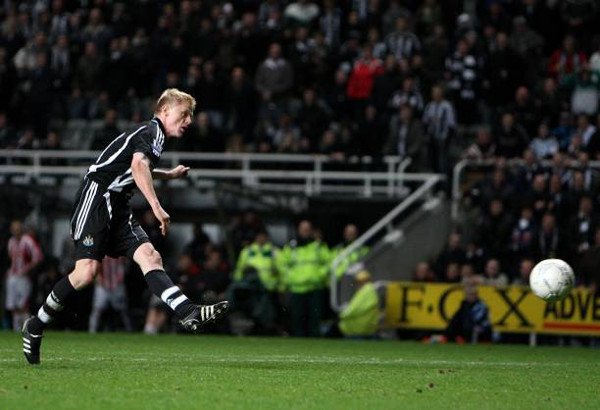 76 mins Milner and N'Zogbia raced over halfway on the counter-attack. The Frenchman released a perfect pass for Damien Duff to run onto and drive home a low shot. Nice to see him back in the groove after his injury and appearing as the hapless toy boy in BT Total Broadband ads..... 4-0

"There was finally some welcome consolation shortly afterwards when Lawrence, the scorer of a fine goal when playing at St James in the red and white stripes of Sunderland, curled a 20-yard beauty across and over Given into his left-hand corner.

"Stoke fans were encamped so far up in the Gods  reportedly a quarter of a mile from the centre spot  that many were probably receiving notification of the goal via an official club SMS text message before registering it with their own eyes.

At least from that distance they will not have seen or smelt the blood haemorrhaging metaphorically from their outclassed players during a mercifully rare beating." 4-1

It was impossible to be immune from what was going on, as it was coming from every angle.

Whats important for me is that the players have put in a very good performance. These sort of eras are difficult for players and staff alike, and a new era started today.

All thats important is that were in the next round. Whatever the factors are outside of that, Im not really bothered. I dont think you can question the players commitment.

After Saturday, I suppose, more than anything there was a question mark over the players, so for them to go out and turn in a performance like that was good. Im pleased for them.

It would have been nice to keep a clean sheet, but the most important thing for us was to get through the tie, and weve done that with a bit of style, and Im particularly pleased for the players. Whatever happens now, we can move on.

I thought the challenge on Emre was awful, lets be honest. It was a ridiculous challenge, and you only have to look at Emres shin to see how bad a challenge it was. Ive seen it a few times on the slow-mo as well, and its not pretty.

One thing led to another. The first challenge should have been dealt with, and after that its another player that we lose at a time when weve got a number of players unavailable.

That makes it even more difficult for us, but well have to deal with it.

"It's amazing. The fans are on a high and the Keegan days are back.

"We heard the news before the game and we knew there would be a buzz around the stadium.

"We were in the dressing room when Nigel Pearson was giving his team talk and you could hear the fans singing 'There's only one Kevin Keegan' outside.

"The whole place was rocking and we put on a great show for the new gaffer.

"I think I can speak on behalf of the players and say that everyone is delighted. It has given the club a lift and the fans showed that - they were absolutely buzzing." 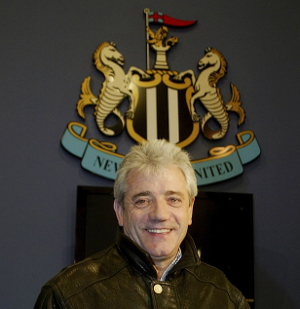 "I know what they want and I know what they don't want as well. As long as they are realistic and patient I think we can try again to help them have dreams and possibly win something.

"I am just as excited this time as I was when I came to play here at 31 and when I came as a manager at 43 or 44. I think this is right, I have certainly inherited a strong, talented group of players - which is something I didn't have when I came last time.

"When I came last time we were wondering whether we could fill the stadium. That is not a problem. They will be trying to get a stadium big enough if we can put some football on and get some success here.

"No excuses tonight, I thought we were beaten by a better team. I don't think it helped that Kevin was announced before the game, it upped the crowd by about 15,000.

"I was a little bit surprised because I thought they would go for Alan Shearer. It's a special club. Irrespective of that, we were poor tonight, we can't carry players.

"That's the way it runs. Unfortunately for us, everything you wouldn't want to happen did happen.

"We've just got to take it on the chin. For me, though, the biggest game of the week is against Preston on Saturday."

"Maybe a kick up the backside was what we needed. It was a reminder that we are far from good enough to play Premiership teams at the minute.

"It hurt - the fact they were down to 10 men and we still couldn't live with them.

"We are battered and bruised, but we have to pick ourselves up for Saturday." 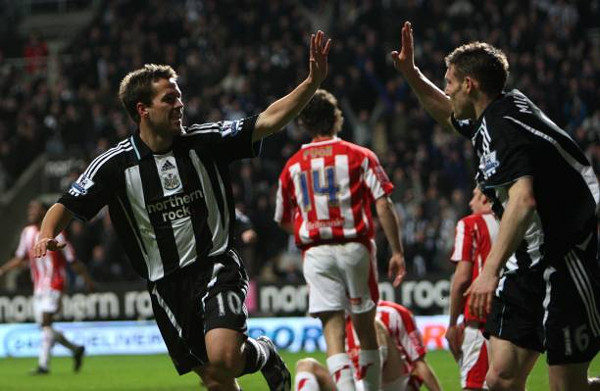 The Stoke fans may have aired their own favourite Tom Jones ditty "Delilah" tonight, but a few choruses of "The Green Grass of Home" would have been a more fitting soundtrack for a wholly unexpected comeback by a familiar figure.

At 3pm this was a match that we'd intimated could be well worth losing, in order to rescue us from the prospect of two Emirates torture sessions within four days.

The draw for the Fourth Round seemed to have removed any thoughts of a run to Wembley and in our attempt at rationality, we figured that it was better to have a ten day break after Bolton before the Premiership test in North London.

For no other reason that would have given us time to regroup and any appointment a chance to work with his new charges.

By 4pm though, normal thinking was out of the window.

The news of the return of the man who was once "1000% finished with football" had broken, sending Tyneside into a state of incredulous disbelief.

Queues started to form at both the ticket office and the shirt name printer in the club shop.

Keegan Mania had broken out once again - and this was a team and a city on the up, negative memories banished, be they of the Northern Rock collapse, the 0-6 howking in our last game or the gloom-invoking sight of Allardyce, Redknapp, Hughes et al (not Shearer).

Unfortunately however, local and national TV muppets failed to check their facts before embarking on ever-more hyped statements, with both Sky and ITV wrongly reporting that the game was a sellout (incredibly the latter were sticking to their story 24 hours after).

That the game kicked off without the man of the moment on show hardly seemed to matter, as the sheer excitement of the appointment had energised crowd and players alike.

A goal from the visitors would have dampened some of the fervour, but the Potters failed to get past Given for a second time when they found a route towards his goal in the opening moments.

Dreamtime duly arrived with Owen's opener, even though KK hadn't taken his place in the Directors Box with messrs Mort & Ashley. He was in the building though...

Playing seemingly with their shackles removed and taking advantage of the wide-open spaces left by the Championship side, the dismissal of Emre seemed hardly to matter as a second goal quickly arrived, Keegan applauding politely at that one.

The Championship side did try to get back into the game after the break, but after missing one half-chance Milner went up the other end to seal the tie, Duff then adding to the celebrations.

couldn't dampen the euphoric atmosphere as Keegan & Co danced their way back into the bowels of the Milburn stand to start planning a brand new era.

For the fans, smiles on faces were the order of the day as "Keegan Wonderland" and a few other old favourites were dusted down and given an airing. Funny, familiar, forgotten feelings.

Despite our squad limitations, everyone on the field contributed to a positive and enjoyable performance that at least partially banished thoughts of Saturday's horror show.

And although it's important to remember that this was against the most mediocre of opposition, the difference in attitude and enthusiasm we showed was markedly different from the first tie.

Carr, Duff and N'Zogbia looked like different players, Owen's body language seemed more positive and we played without the fear that never seems to have been far away. Percentages my arse.

Regardless of the ongoing press-led debate on whys and wherefores of Keegan's arrival (and his departure a decade ago), the players and public responded instantly, positively and honestly.

Quite simply, for lifting the gloom around the place (not to mention selling a few thousand extra seats for tonight and Saturday) the appointment has already been worthwhile.

Football may have moved on since Keegan last managed - let alone since he last took charge of a Newcastle side - but the outpouring of emotion that accompanied this appointment was an expression of relief that the Graham, Glenn and Sam misadventures had moved us in a direction that was anything but crowd-pleasing.

For too long, people have endured rather than enjoyed their football here, even if they were still attending and supporting their team. We may still never get to where we want to be, but at least now the journey promises to be more enjoyable and adventurous than it looked ten days ago.