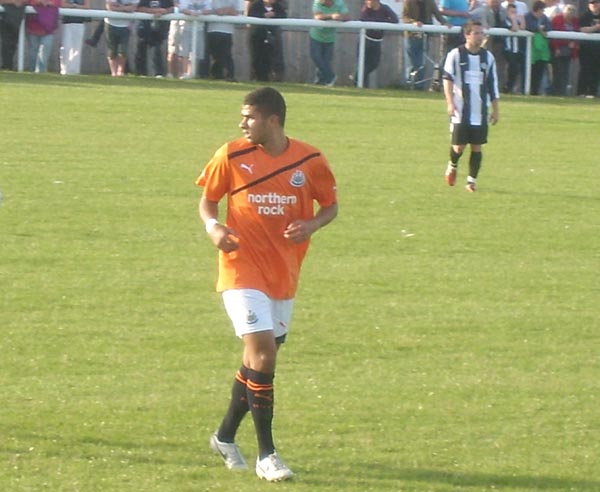 United's reserve side rounded off their public pre-season programme on Friday night with victory against Northern League side Ashington at Woodhorn Lane.

The fine weather enticed 1,242 fans through the gate - almost double the number who witnessed a 3-2 Magpies win on our previous visit here back in July 2009.

Wearing their orange change kit once again against a home side clad in their traditional black and white stripes,, Brad Inman gave Newcastle a sixth minute advantage with his third goal of pre-season.

Left back Michael Riley motored down the left flank and pulled the ball back for Inman, who was allowed time to take a controlling touch on the edge of the box before slotting home a low shot to 'keeper Karl Dryden's right.

Further goals looked likely and Phil Airey saw one effort well blocked by Dryden. With captain James Perch playing at centre half, Ashington rarely threatened but Gareth Bainbridge was only just off-beam with a chip.

Patrick Nzuzi was then denied on 16 minutes by Gareth Rees, who blocked a goalbound shot after Dryden found himself marooned on the edge of his area.

Within a minute though, United doubled their advantage, defender Andy Dugdale penalised for shoving Phil Airey in the back and seeing the United foward get up to convert the resultant spot kick in the 17th minute.

Mehdi Abeid then came close to opening his account for the club with a fierce free kick that was palmed away, as the home defence were penalised for another Airey foul.

With no further addition to the score before the break, the second half found Peter Beardsley's side playing keep ball for long periods but struggling to create and convert chances against a much-altered Ashington lineup.

Airey came closest with a chipped effort from distance, while substitute Alex Nicholson darted into the penalty area but swept his first-time effort beyond the far post.

After one of the quieter nights of his career though, Soderberg was called into action in the final seconds of the game, blocking an effort from James Harmison.

The United 'keeper could do nothing to prevent Ashington from netting after their next attack however, Craig Scott getting on the end of a free kick played across the United six yard box to fire home for a Colliers consolation.

A trio of ex-Magpie reserves appeared against their former colleagues in the shape of Jonny Godsmark, Darren Lough and Matty Grieve - the latter making his Ashington debut after signing in recent days.