5mins A Yohan Cabaye corner was cleared and the same player took a quick throw-in on the United right before swapping passes with Moussa Sissoko and sending a deep cross into the Blackpool penalty area.

Shola Ameobi was out-jumped by a home player but the clearing header went only as far as Mike Williamson, whose cushioned nod back allowed United's number 23 to take the ball on his chest and fire a right footed shot beyond the unsighted Matt Gilks from just inside the six yard box. 1-0

"Myself and Graham Carr have given Joe (Kinnear) the targets, but they're difficult to get over the line and I'm sure Joe's trying to be very patient in trying to get the right player for us.

"There's been no problem (with JFK). Joe's job is to make sure that I get the support I need and he's trying to do everything he can to do that.

"It's obvious at the moment that we need a player or two and hopefully he can do that. We're in good shape. We've got a strong squad, but we just need a little tip over the edge to give us that depth that we need.

"It's a good win for us - we defended well at times and had two or three good opportunities to get a second goal. I thought it was a good day's work.

"I think we're in good shape physically and it's just about getting the right balance in the team.

"It's unusual but nice to be able to talk about Papiss (Cisse) as a footballer, after all that has gone on, and I must say the two days' training he has put in has surprised me.

"He has looked in really good fettle, and he will have half a game, at least, at St Mirren.

"I am pleased it has all been sorted out, and we will bond round him now and support him. We will try and get the best out of him, because he is an important player for us.

"It was a taxing situation for him but he is fine. We are a resilient bunch, in football. You have to bounce back in our world, or you'll be in trouble.

"Papiss can play a big role for us this coming season, and I fully expect him to kick on and make a positive contribution. He was a little bit isolated at times last season, on his own up front. But if he can get a relationship going with whoever might be alongside him, I can see him thriving."

"I think we equipped ourselves quite well - the two new faces freshened us up front a little, it was a very good work out.

"In the first 15 minutes we struggled to get to grips with Newcastle’s movement, but the boys upped their game a little bit and started to assert themselves. We looked a threat from then on.

"It was a really good workout against a really strong Newcastle team. They have some really good players, their movement was terrific. What it does is get the boys to up their game. Some of the levels haven’t been great this pre-season, but they were terrific today.” 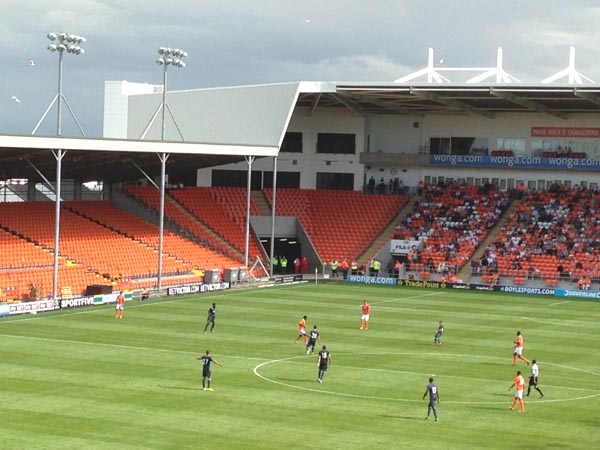 Shola Ameobi made it three pre-season goals in as many games as Newcastle won their second friendly in four outings on a sun-drenched Sunday afternoon in Lancashire.

United's number 23 netted the only goal of the game in the fifth minute of what was a fairly sterile encounter, against a Tangerines side that included former Magpies striking partner Michael Chopra for the first time.

It was another smart strike from our only currently active striker in the style of last weeks' effort against Pacos de Ferreira and came after a blue-clad United dominated the opening exchanges.

Sylvain Marveaux then came close to adding another when picked out by Yohan Cabaye, only for a home defender to nip in and thwart him.

With a week to go before their opening Championship fixture against Doncaster Rovers, Paul Ince's side began to gain a foothold in the game and after Bobby Grant fired wide on 17 minutes, a series of home corners tested the Newcastle defence.

Rob Elliot palmed a Craig Cathcart head onto the bar on 29 minutes to preserve United's lead and the highly-rated Tom Ince then caught sight of goal seven minutes before the interval but was unable to test the visiting custodian.

There was only a Cabaye free kick to stir the away contingent before Moussa Sissoko fired home on half time, only for to be ruled out for a questionable offside. That move though looked to have come at some cost, Shola hobbling away having been beaten to the ball by Sissoko and failing to reappear for the second period.

Haris Vuckic arrived in his place but what goalmouth action there was in a sterile second half came at the other end. Debutant striker Steven Davies saw a header ruled out for offside before Ince dragged a 71st minute shot wide when looking a certain scorer.

Having played a full 90 minutes the previous day against Kilmarnock, Adam Campbell appeared as a late sub at Bloomfield Road and his trickery allowed Marveaux an 89th minute shot - our sole effort of the second period.

However Gilks was able to smother his shot, meaning that "the Wonga Derby" was decided by Shola's strike. It's fair to say that interest in this encounter remained very low though and neither side emerged with much credit...

Pre-season visits to second tier sides in recent seasons have seen both Norwich City and Cardiff City register victories against United and underline the potential that was ultimately realised in successful promotion bids.

The same cannot be said of Blackpool today though, with their fans showing similar frustration to their Magpie counterparts over the lack of signings and a feeling that the Seasiders aren't ready to hit the ground running.

They ended this game with a trio of trialist midfielders on the field in the shape of Frenchman Massire Kante, South African international Daylon Claasen and Neal Bishop - the latter once on Gateshead's books but latterly with Notts County.

As expected, Papiss Cisse took no part in the game but Alan Pardew later confirmed that the Newcastle number 9 will play at least 45 minutes at St. Mirren on Tuesday. Of Hatem Ben Arfa though there was no word and concern that a player who is an acknowledged slow starter has played just 45 pre-season minutes to date, echoing last year's fragmented preparations.

Welcome though the Cisse news is here needs to be more striking options than old warhorse Shola if this season is to be anything more than a joyless grind. If we have pretensions at anything other than mediocrity, this surely has to be the time to say thank you and good night.

Don't forget it was Alan Pardew who first suggested at the back end of last season that Shola may not see out the final year of his deal. It's a measure of his reduced expectations and exasperation that the manager has stopped making those comments.

For him to be scoring goals in friendly matches is nothing new, but it's important not to confuse games like these with the real stuff: 33 starts, 45 sub outings, 9 goals in the Premier League since we were promoted in 2010.

The only positive to be extracted currently is that Shola is filling in for others, turning chances that others make into goals - goals that would also be scored by any other "proper" striker, along with a few more that would come from having genuine pace, threat - and fitness.

Whether new arrivals will be balanced with a high-profile departure remains to be seen though - but you wouldn't rule it out with this mob.