19mins Sammy Ameobi made progress down the left before laying the ball off to Papiss Cisse for the Wonga-clad striker to neatly curl home a right footer from inside the box. 1-0

26mins A surging run from Mathieu Debuchy to meet Vurnon Anita's through ball ended with the full back coolly notching his first goal for the club. 2-0 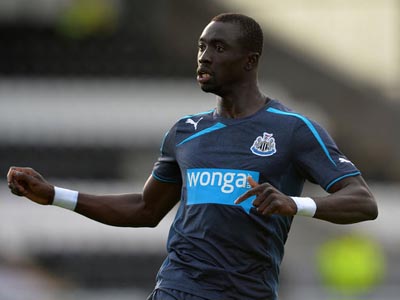 "I was pleased, especially with the movement. They put us under a lot of pressure and we had to play very, very well to play under that pressure.

"We scored two fabulous goals. Without being derogatory to St Mirren it could have been three or four by half-time. We were terrific. At the start of the second half we were too. We had some great performances tonight.

"I’m not concerned about any of them slipping away. I think that we are in the market still.

"We will pay what we think is the right price. We’ve done that ever since we have been here. We have always managed to get somebody over the line (even if it was Shefki Kuqi....) and I think we will this time.

"They are all very much on the radar and we will pursue them until we get them.

"All strikers need to score goals. It gives them that added confidence. It was a fabulous goal and I was very pleased with it. He was under a lot of pressure. We love him and we embraced him. He worked so hard.

"That was a reflection of it all last night because you don’t score a goal like that without working hard. Fair play to him because he hasn’t been around the group this pre-season.

"Dan played very well when you think about the trials and tribulations he’s had with Crystal Palace.

"It was good to see him put in a performance like that. He could have had three goals really. He created chances and was terrific.

"I was disappointed for Dan (not to join Palace). I thought it would have been a terrific move for him. Sometimes as a manager you want players to progress. It can be difficult. It is difficult for him to get into the first team here – it really is.

"He wants regular football. It would have been a good move."

On Dummett and Newton:

"Dummett has come out the pack for us this pre-season and has been our big bonus because of the experience he got here. You can see his confidence levels are up and that’s the same with Conor.

"I think Conor is a little bit away, with the quality we have here in central midfield, and there could be a situation where he returns to St Mirren. I’d have no problem with that.

"I thought St Mirren were very well organised and the workrate was absolutely terrific. We were really on our game. That was a proper Premier League team St Mirren were up against and they gave a great account of themselves to stay in it because we could have run away with it against lesser opposition."

"I looked at their squad on Tuesday night and even when they were taking guys off they were replacing them with players who are top drawer. Conor Newton came on in the second half and he did very well for us last year and we now have a strong affiliation with Newcastle.

"Young Adam Campbell looked lively when he came on and he is a player we are more than aware of.

"We’re always interested in quality players. It was telling when Conor came on for Newcastle and got a standing ovation from the fans. That shows how well thought of he is up here. He wears his heart on his sleeve and is the type of player we are looking for.

"Every manager is always looking to try to add that bit of quality to his squad and, as long as it’s the right bit of business for St Mirren Football Club, then we would act upon that. If Conor becomes available, it’s certainly one that would interest us.”

evening, before Mathieu Debuchy added a second against the SPL side.

Fielding a starting XI showing nine changes from that which won at Blackpool on Sunday, Alan Pardew's side began brightly and Cisse shot wide in the third minute after unexpected inclusion Dan Gosling teed him up.

Gosling again was the provider after 18 minutes, when Hatem Ben Arfa found himself confronted only with Buddies 'keeper David Cornell. However he dallied momentarily on the ball and the chance was lost.

Within a minute United were ahead however thanks to a cracking finish from Cisse. Ameobi was instrumental in that goal and soon caused problems on the Newcastle left again - only a fine fingertip save from Cornell denying Gosling with a headed effort.

More goals looked inevitable with the Saints barely able to get out of their own half and starved of possession for long periods and Debuchy quickly doubled their advantage.

In fitness terms, Cisse looked like he'd never been away and seemed happy and relaxed, signing autographs for fans before the restart. On the field for just over an hour and acknowledging applause from the away section, he had two further shooting chances but was unable to make either count. He was also never given offside.

Equally frustrated in front of goal was Gosling, who was playing in an advanced midfield role and saw one effort deflected away, narrowly fail to reach an inviting low centre and then bounced another wayward shot off the roof of the adjacent indoor soccer dome.

With the usual string of substitutes seeing the game lose any cohesion, the home side were belatedly glimpsed as an attacking force in the closing stages and Sean Kelly headed over when well placed in the 81st minute.

Other than that though, the biggest cheers of the night from Saints followers were directed to former loan duo Paul Dummett and Conor Newton, making a first playing return to Paisley.