"The pitch was a bit long for our liking - it meant we had a slow pass out there. I didn’t think we were great, but we have really worked the guys hard this week, both on Sunday and Monday."We’ve worked as hard as we have all season. We were a little below our levels.

"It was a great game in terms of competitiveness. It's fair to say we weren't at our best but we got stronger as the game went on, which was pleasing.

"I gave everybody a game, which was the intention, and we're building up nicely.

"Some people did themselves a lot of credit. I thought Jonas did really well, was really positive and looked like his old self. Mathieu Debuchy was excellent, as was Cabaye and one or two others.

"Our substitutes made a little bit of an impact too.

"We certainly didn't deserve to draw, if I'm being honest. I thought we deserved to win but the goal just wouldn't come.

"Colo has a little groin pull, but I don’t think that’s a big problem - the big bonus is we have everybody available (seemingly forgetting that new signing Loic Remy is injured).

"Tim has now played 45 minutes, and everybody else is up to speed. It’s good news. He had three-and-a-half months out so the plan was to give him half a game. He needs to work hard now to give himself a chance for Manchester City.

"He will be fit but it's whether he will be ready, because three-and-a-half months is a long time for a goalkeeper but he's an outstanding keeper, one of the best in the world, and hopefully he will be ready."

"I am thrilled with the game. I thought from start to finish against a top team, we played really well.

"We kept the ball well, our work rate was excellent, our passing was good, we created chances against one of the best teams we’ll play this year, so I’m delighted.” 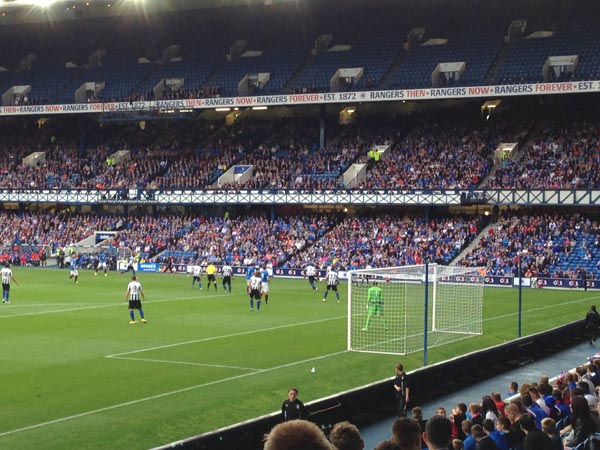 Shola Ameobi continued his scoring run as he grabbed his fourth pre-season goal to save United's blushes with a last minute equaliser at Ibrox on Tuesday evening.

Unable to field Loic Remy due to injury, Alan Pardew was boosted by Tim Krul's return and named his strongest available XI against a Rangers side retaining just four players from that beaten in the League Cup by Forfar.

Krul was quickly back into action, caught by a late boot from a home player within seconds of the first whistle and within five minutes fishing the ball out of his own net.

That came when Fabricio Coloccini was harshly adjudged to have upended Nicky Clark in the box and a penalty was awarded, dispatched past Tim Krul by Lee McCulloch.

Taking the opportunity to field a clutch of new signings unable to appear competitively until next month due to a transfer embargo, Rangers adopted a combative approach to the game and United dominated possession thereafter.

However the black and whites did remarkably little of consequence with the ball at their feet, only ever looking like unlocking the home defence when Jonas Gutierrez pushed down the left win towards the byline.

His end product was as poor as the rest of the visiting team though and United's goal threat was restricted to occasional long range efforts - Matheiu Debuchy's volley stinging the hands of 'keeper Cammy Bell, but shots from Yohan Cabaye, Davide Santon and Hatem Ben Arfa all passing harmlessly wide goal into the Copland Stand.

Adding Yoan Gouffran to the mix at the expense of Ben Arfa after the break did little to improve a disjointed and distinctly lack-lustre display from United.

Papiss Cisse and Moussa Sissoko contributed little, with the latter booed by home followers when replaced just after the hour mark, following an angry reaction to an illegal challenge by Arnold Peralta on 43 minutes.

That required the referee and linesman to intervene as a furious Sissoko squared up to his opponent and both players went into the book. Debuchy meanwhile was warned after a couple of uncompromising challenges.

Various other clashes occurred over the course of the game, with a certain amount of "sledging" evident between various players. Gers goalscorer McCulloch meanwhile took advantage of lax officiating by jumping into defenders at every opportunity.

The ease with which those tactics derailed Newcastle's forward progress was concerning though, with notions of an equaliser only conjured up late on when Rangers had introduced a handful of their shadow squad to the fray.

That coincided with the late appearance of various fringe players for Newcastle, and they proceeded to post far more of a threat than first choice XI.

Some of the industry and passing ability lacking in Cheick Tiote's performance was provided by Dan Gosling, while Sammy Ameobi's direct approach down the left flank at last paid dividends, at least in winning some corners.

Once again though it was Shola who appeared to save the day, providing a focal point in attack and holding the ball up in the manner Pardew doubtless hopes that either Darren Bent or Bafetimbi Gomis will be able to achieve.

And Shola provided a face-saving equaliser in the last minute, tucking the ball home after Sammy seized on Foster's stray pass and played in his elder brother.

While more than welcome though, the goal didn't disguise the unrelenting mediocrity of what had preceded it, with United lacking both organisation and creativity against opponents now operating in reduced circumstances. Meaningless yes, but also dispiriting.