30mins Remy danced his way forward from the halfway line and cut inside two defenders before hitting the ball low and hard inside Marshall's post from the edge of the box. 1-0

38mins Cisse's toe=poked effort was saved and Remy swept home the rebound through the defender's legs and just inside the far post. 2-0

58mins Odemwingie took his time to sell Krul a dummy before placing the ball past Williamson on the line. 2-1

"I think it was an important win. On Monday night (at Everton) we let ourselves down as a group and we wanted to put it right.

"The first half was as good as I have seen us play, even going back to the year we finished fifth. We locked them in and we had a more offensive look to us.

"We did not play as well in the second half but we at least showed resilience that when the home team put pressure on us we can cope with it.

"For our fans it's a bit of payback for Monday night and I think they'll enjoy that result, We can all go into the bar and scratch our heads a little bit about our team. Are we really good or are we really bad? I'm not sure!"


Malky Mackay - who admitted in the run up to the game that he turned down the chance to become Alan Pardew's assistant at SJP in 2010 - said:

"We started really slowly and you cannot give good teams and players time and space on the ball, You end up being punished, and we were in the first half. We made a couple of changes at half-time and had a few words.

"We have to make sure we play, because in this league, you are punished if you don't.

"We had great momentum and had balls flashing across their box. We had three or four (scoring chances) which did not break properly for us. I thought at one point the second goal was definitely coming, because we played really well in the second half."

Commenting on whether an ongoing row between the City players and owner Vincent Tan had affected his side's performance:

“They deal with the football club and the chief executive. That’s something that can’t really come under my brief. It’s certainly not an excuse our players are giving. We relish the challenge. We have shown we can compete at the top level."

Our most recent visit to the Cardiff City Stadium came back in August 2012, when a muddled pre-season campaign ended in suitable style with a 1-4 defeat, our goal coming from a Shola Ameobi spot kick conversion. Today's match programme wrongly recorded that as a 0-4 loss.

Papiss Cisse extended his Premier League scoring drought to 1066 minutes since netting at home to Fulham in April 2013.

It's now four starts and now five goals for Loic Remy since his arrival. The Frenchman managed six in thirteen starts last season for QPR. 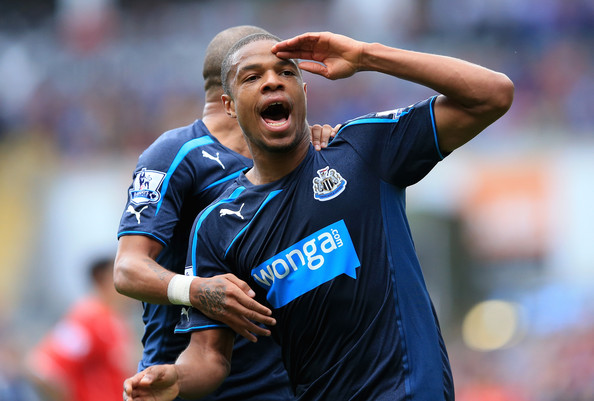 There's a certain irony in the fact that the only signing JFK managed to get over that mythical line in the last transfer window is currently ensuring that his manager remains in post.

Compensating for the continued goal drought endured by Papiss Cisse and the absence of other striking options, the form and threat of Loic Remy makes Newcastle a viable proposition going forward whatever the occasion - something acutely missing since the sale of Demba Ba.

To call him pivotal is an understatement: at present the Frenchman is as vital to our fortunes as naming a goalkeeper in the starting XI. Two more goals here today ensured that United suffered no hangover following their Everton misadventure and went into the international break on an even keel - rather than heading full steam for the rocks as had been feared.

Kinnear of course took credit for the arrival of Remy and made sure he was photographed alongside the new arrival, but the former Marseille player - and his agents - were familiar to United well before that footballing dinosaur roamed this particular piece of earth.

This wasn't just a solo effort though from Remy. A scintillating first half display from the blue-clad Magpies swept aside City and could have seen them go in at half time with a far larger advantage. Moussa Sissoko saw one effort tipped over and Yohan Cabaye hitting the post with a crafty free kick as Alan Pardew's side more than reprised the bright opening that paid dividends at Villa.

Two goals to the good, the onslaught continued after the interval with Sissoko again denied by David Marshall before the first period of cohesive play from the home side saw them gain a foothold in the game when Peter Odemwingie netted, continuing a prolific scoring run against us that began in his West Bromwich Albion days and on one occasion, sealed Chris Hughton's fate.

Maintaining their one goal advantage gave United some nervy moments in the closing stages but despite the introduction of old boy Craig Bellamy in a wide right role and a belated stirring of the home crowd into vocal support, Cardiff couldn't conjure up an equaliser.

If anything, United looked the more likely to score again, Papiss Cisse spurning a glaring chance from point-blank range, while a blatant handball in the box was missed by referee Kevin Friend.

Anything other than the three points would have been a travesty for The Magpies however, who looked sharper and more composed in every department than in the 45 minute humiliation that was the first half at Goodison. And that improvement included the goalkeeping slot, Tim Krul coming off his line to make a vital interception to deny Jordon Mutch in the closing stages.

The second half introduction of fit-again Jonas Gutierrez for Remy down the left flank was booed by toon fans at the time, but proved crucial in shoring things up, although Pardew was visibly urging his troops not to drop deeper after conceding and thus hand the initiative to the home side.

Those same fans urging the arrival of Hatem Ben Arfa shortly after Cardiff scored obviously hadn't attended or watched Monday night's game - and therefore failed to witness the fact that we were in effect a man short in the first half at Goodison, fielding a luxury that we just couldn't afford.

One man who did further his cause at Everton was forgotten man Mike Williamson, and he duly made his 100th start for the club in preference to Mapou Yanga-Mbiwa. And aside from some confusion over City's goal when he was dragged out wide, a solid display brought a deserved ovation as he was the last man off the field at full time.

The win, plus other Premier League results, moved United up to eleventh with ten points from the first seven games. We also matched our away win tally in the league from the whole of last season with a second success on the road this time round.

Away from those bland statistics however lies a situation that's far trickier to call, an ambiguity hinted at by Alan Pardew post-match when admitting that he doesn't really know what he's got in his own dressing room.And while the precious points today may have improved his mood, whether they have enhanced his job security at Gallowgate is a trickier one to call.

A run of disorganised defeats would undoubtedly weaken Pardew's position in post, but it's debatable whether our current indifferent form does anything other than highlight the fact that this squad has undoubted potential, but it remains unrealised. It used to be called the next level.

There again, on the basis we have no other stated ambition than to finish in the top half of the table, the manager is just a hairs breath away from meeting his employers demands. Will that lack of ambition combined with our inconsistency actually end up keeping the manager employed?

Returning to the headline-grabbing goalscorer, at this rate of progress it's not just QPR who may fancy signing him up - regardless of comments made by Dirty Harry in recent days. Since when did anyone ever believe a single word that disreputable scoundrel uttered by the way?

Partly plagiarising our shirt sponsor's motto, this particular little loan is rapidly garnering high interest. If our Director of f****all is looking to curry favour with those who mock him, turning that temporary deal into a permanent one would be a positive move. To do so of course though would also give Pardew's cause a boost.