2mins City's defence fatally allowed Yohan Cabaye's corner ball to bounce in the six yard box and travel through to Loic Remy at the back post, the in-form striker nodding home from close in at the Gallowgate End 1-0

38mins A great piece of skill in his own half saw Shola evade Bradley Johnson before threading a fine pass for Remy, who had found space on the right flank. He played a short pass back to Sissoko and he was able to advance in possession before curling over a right-footed cross into the area.

Ameobi beat his marker and headed the ball goalwards, only for John Ruddy to unconvincingly palm it into the path of the lurking Yoan Gouffran, who rammed it home from close range. 2-0

80mins Nathan Redmond's corner was by Dutch international Leroy Fer on the penalty spot, who out-jumped Coloccini to head past Krul. 2-1

"I keep criticising the press locally here in that when we win, we are a European team or whatever, and then when we lose, it’s the end of the world. It’s just really truly about winning games, keeping our feet on the ground and seeing where we go.

"What we have got, though, is a really good group who were really committed to win. The only agenda I have set them, really and truly, was to win, there was no other agenda because this game is an easy game to lose.

"You win against Chelsea, you go to Spurs and then Norwich turn up and you lose, and we have sort of buried that a little bit, and I am really, really pleased. I am as pleased tonight as I was when we won at Spurs. I might not look it, but I am.

"This is precisely the sort of game we have lost in the past, it was an easy game to lose after the wins over Chelsea and Tottenham so I’m delighted with the win.

"That’s another goal for Loic (Remy) and it keeps his run going. I thought that wasn't one of his best games today, but he is still a young player and he is still learning.

"There were a couple of times when he could have set other plays up and didn’t. It’s too early for me to talk about him staying beyond the end of the season, that’s an ongoing thing.

"Shola (Ameobi) has had some fantastic players as competition while he has been here and he has that again now with Papiss Cisse and Hatem Ben Arfa on the bench.

"I’ve challenged him to find that consistency and credit to him because he has done that. He was excellent for us today, especially in the first half. He played for Nigeria on Monday and he’s not the sort of lad who can play two games in a week regularly because he’s a big guy. He was cramping up at the end.

"I thought we looked a little bit tired in the second half because of all the players who had been away on international duty and when you are 2-0 up at half-time, it’s easy to lean on that little bit.

"But we still defended very well and had numerous chances to wrap it up, but the most important objective today was the win, and we got the job done.

"We had a tricky last ten minutes but prior to that I thought we were comfortable. You can get a bit lackadaisical in your play at 2-0 and I don’t think we were as good in possession as we were in the last couple of games.

On recent reports from Argentina that Fabricio Coloccini was intent on forcing through a transfer to San Lorenzo in January:

"I wasn’t aware of that, if I am honest, but it’s difficult when players go home and they are interviewed. You never know if there is any truth in it. I haven’t spoken to Colo about that.”

"It's very difficult. We know how good Newcastle can be at St. James' and the last thing you want is to be 1-0 own after the first few minutes. We then conceded a second to give us a mountain to climb but we know we've got quality and spirit in the group and we showed that in the second half.

"The pleasing thing for me is that we made a real go of it and gave ourselves an opportunity, but we ultimately gave ourselves too much to do - you just can’t afford to be 2-0 down at half-time and certainly not 1-0 down after two minutes.

"We made life too difficult for ourselves. We managed to create some chances and rallied well in the second half and made a real good go of it, but ultimately it is those goals that have done us today.” 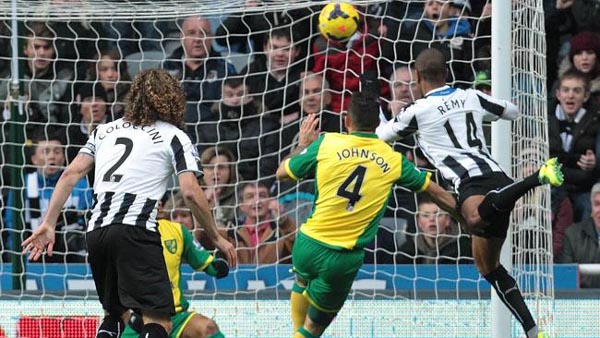 Chris Hughton's second return to SJP again saw him leave empty-handed - but only after his side threatened to snatch a point and ensured a jittery last ten minutes for home fans on Saturday.

First half efforts from French duo Loic Remy and Yoan Gouffran were ultimately enough to ensure a third successive victory for United . However, Alan Pardew's men should have put the result beyond doubt well before Leroy Fer breached our defences for the first time in 266 minutes.

Remy netted after just 113 seconds, converting Yohan Cabaye's flag kick from the Strawberry Corner and ending our long wait for a goal stemming from a corner. That barren run stretched back to Demba Ba's effort at Wolves over two years earlier - Cabaye also the provider that day.

United failed to capitalise on that early breakthrough though and the Canaries twice carved out half-chances through long balls into the box; Shola Ameobi well placed to hoof clear the second opportunity from the six yard box.

Perhaps boosted by thoughts of next summer's World Cup, Ameobi was enjoying one of his most energetic and effective games in Toon colours for a long while. Lleading the line expertly, winning headers and holding the ball up, his astute pass released Moussa Sissoko after 30 minutes, only for the Frenchman to screw his shot wide when confronted with the advancing Ruddy.

City again caused confusion at the other end of the field though, with the lively Nathan Redmond sweeping a deep cross over from the right for Anthony Pilkington to head across goal. Tim Krul, Mike Williamson and Fabricio Coloccini all stopped as the ball dropped towards the post, Williamson then out-muscling his goalkeeper before wellying Gary Hooper's dangerous nod back away to safety.

Returning after a six game absence, Coloccini was paired with Williamson in central defence, Mapou Yanga-Mbiwa diverted to right back to cover for the suspended Mathieu Debuchy. Looking slightly ring-rusty at times, there was an early scare when Colo appeared to be struggling to run and visibly holding his groin. However he completed the full 90 minutes.

What proved to be the winner soon arrived, Gouffran grabbing his second goal in as many home games. Ameobi then almost made it 3-0 on half-time, only for Ruddy to turn his 20 yard blast around the post. Shola and his side still departed to an ovation though, with the prospect of further goals warming the crowd as the temperature noticeably dropped.

City lost Pilkington after the break when he was halted on the edge of the United box, the Republic of Ireland international stretchered off following treatment with a hamstring pull. That brought Johan Elmander on almost three years to the day that his two goals and guile for Bolton resulted in red cards for Williamson and Coloccini and a loss that edged Hughton towards the SJP exit.

The Swedish forward never looked likely to grab his first Premier League goal for Norwich, but City did get forward with more conviction as United ran out of steam; Cabaye and Ameobi replaced by Vurnon Anita and Papiss Cisse respectively in an effort to revitalise the side.

Still the momentum was with City though and after forcing four corners in quick succession, Norwich halved their arrears with ten minutes to play - Redmond claiming the assist against the club who had scouted him when at Birmingham City. Presumably he wasn't French enough for us at that point...

Eyebrows were then raised as Pardew introduced Hatem Ben Arfa for Gouffran - the former out in the cold in recent weeks, partly due to a perceived lack of effort when not in possession. Despite donning the perennially bonkers-looking combination of short-sleeved shirt and gloves though, he did his utmost for the cause - avoiding the need to track back by taking possession at every juncture.

United came close to sealing the win when Remy and Sissoko combined to put Cisse in on goal - although the offside flag that ruled out his strike looked decidedly dubious when seen later on TV. Cisse also headed over after good work from Ben Arfa, before five added minutes were seen out with only a few squeaky posterior seconds - nowhere near as intense as the frantic finale at Spurs.

The three points took United up a place to eighth position and a  20 point haul from twelve games - form that if extended to the end of the season, would have been sufficient to ensure a sixth-place finish in each of the last two seasons - and fifth in the one before that.

And therein lies the rub. With communication from the club currently consisting either of managerial soundbites or programme notes attributed to the Director of F***all, it's a matter of debate quite what the collective ambition of the club is.

A cynical answer to that would be along the lines of maximising revenues, but attempts at clarifying the financial picture by accountants writing in the True Faith fanzine would seem to indicate a lack of success in that area.

Saturday's programme included news of a new club bonus structure activated by the first team achieve a tenth place finish or higher, replacing a previous arrangement kicking in at twelfth.

That tenth place trigger echoes the comments of club directors at a recent fan forum about being our collective target - but begs the question of whether settling for that level of finish is a merely public stance the club are taking, or a hint of something more solid.

Fans may hanker after a return to European competition, but given the grief he got internally last season, the manager may be more ambivalent. And given our declared collective disinterest in cup competitions it's a fair bet that the owner isn't checking the expiration of his passport....

Most immediately, deeds done in the next transfer window may prove to be the real litmus test of where we're headed. If Ashley's dreadful sports news service is any guide, then the January sales will see a cavalcade of departures - although the hype tends to be far greater than the reality. It's easy to imagine the rebuttal of requests for signings by the manager if we remain in the top ten.

Out thoughts again return to the January 2011 transfer window, when the unbelievable money offered for Andy Carroll saw United (rightly) cash in, content in the knowledge that the seventh place they then occupied would be enough to keep them up.

That manifested itself in a slow decline down to twelfth and the arrival of Shefki Kuqi - presumably washed up by a freak wave at Druridge Bay. But had we sat lower in the table when the Liverpool bid arrived, would we have made greater efforts to sign viable Carroll replacements - including holding the Anfield club to ransom over loans?

But we're still a long way from that - although thankfully a significant distance (and nine points) away from the mackem misadventure. It's always unwise to presume anything round here though: no-shows at the Liberty Stadium and Old Trafford will soon have the Gloom army recruiting again.