62 mins Sissoko's shot was blocked by a covering defender but Papiss Cisse arrived to gobble up the loose ball and clip it past goalkeeper David Marshall from inside the six yard box - his first goal from open play since the League Cup win against Leeds United last September. 1-0

73 mins around 70 seconds after taking to the field, City substitute Craig Noone took advantage of opponents backing off him to crack home a 30 yarder at the Leazes End.   1-1

80 mins If there was doubt about Elliot's culpability in not stopping the first Cardiff goal, then he looked to be totally at fault for their winner; watching as a flag kick from firebomb corner fell at the back post for ex-mackem Frazier Campbell to nod in.  1-2

"There was nothing in their performance I didn't expect - we controlled the game until the last period. Our aim is to win a trophy and we won't do that by going out in the third round of the FA Cup.

"For the first 20 minutes if the second half we were in control and scored our goal. Then in the last period of the match we let things slip and paid the penalty. We had to defend better from set plays. We selected a whole new back five today and apart from set plays they did OK.

"Before Cardiff equalised the referee had the whistle to his lips and looked set to give us a free-kick, but he didn't and they smashed the ball into our goal. The second was nothing to do with the referee. We should have defended it better and looked vulnerable whenever Cardiff had a free-kick or corner.

"You cannot be outplayed in the final period of any game against Premier League opposition or you will be in trouble. Everybody in our dressing room is disappointed. We wanted a cup run and now we are out.

"We put out a team more than strong enough to win that game, We had a good shape and were in control. Then it got away from us. Our performance deserved better, but we let ourselves down in those closing stages.

"I am disappointed with my group. We’ve managed to lose a game that we were in control of. We don’t seem to be able to get through this tie (round). For the last three years I don’t know, it’s science against me.

“We know at home, especially of this quality, you can’t just back off. You have to keep full on. It’s a level when you back off and play a little bit negatively, you are in trouble - maybe we did that.

"Certainly they controlled last period of the game - and that is the most crucial.”

"It is not about me, it's a perfect start for the new times - the lads had a lot to deal with and it's nice to start with a Cup win. When you turn a game around, it is fantastic. The best feeling you have in games is when you really deserve it and they did today.

"You want players that can make an impact, when I put Fraizer on we knew about his pace and agility. It pleased me a lot when we went 1-0 down that they showed character and the way they dug themselves back into the game. We didn't stop playing, and then of course there were two fantastic pieces of skill, a great header from Fraizer and the goal from Noone was something else.

"We have a solid foundation here, it's the longest and hardest season in any football country so the depth of the squad is something I'm looking at because the quality is there. Maybe we need some additions to blend in." 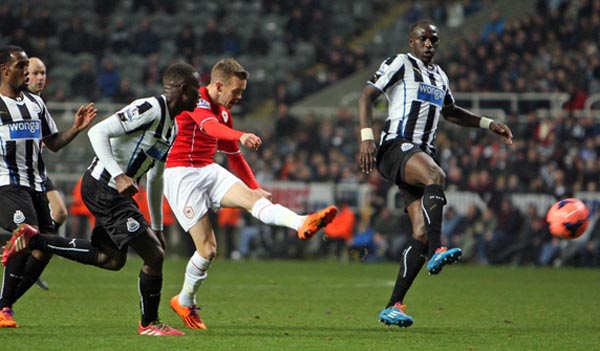 Stevenage, Brighton, Brighton and now Cardiff....it's now four embarrassing FA Cup exits in as many seasons for Alan Pardew, who has presided over just one victory in that competition as Newcastle Manager. Saturday saw his side toss away a lead given to them by Papiss Cisse, conceding twice to City and handing Ole Gunnar Solskjaer a winning start to life working for madman Vincent Tan.

A scoreless first half saw visiting captain Mark Hudson  beat Rob Elliot in the home goal after nine minutes, only for his header to be ruled out for an infringement. Aside from a weak effort by Vurnon Anita, it took United 25 minutes to fashion a decent chance, Yoan Gouffran leading a counter-attack that ended with Hatem Ben Arfa rattling the Leazes End goal frame from distance.

The same player then tested the woodwork at the opposite end of the ground barely five minutes after the restart, before Moussa Sissoko sprang City's offside trap just after the hour mark and bore down on goal. That move ended with Papiss Cisse netting from close range - almost the only time in the whole game that the number nine stayed onside.

A smoke bomb was discharged from the Strawberry Corner and a white cloud drifted across the field, but that failed to obscure the horror of what was to follow. Before play restarted, Pardew replaced Gouffran with Gabriel Obertan - who had reportedly walked out of the ground before kickoff in the Arsenal home game when informed that he wasn't in the matchday party.

Booed on his entrance, Obertan contributed little to the cause and in effect left his side a man down for the second game. Again there were to be consequences. City meanwhile had shuffled their pack, former mackem Frazier Campbell replacing Andreas Cornelius and giving notice of his side's attacking intentions when shooting against a post with 20 minutes remaining.

It was the introduction of ex-Brighton player Craig Noone (injured when Albion knocked Newcastle out two seasons ago) that had an immediate effect though, the midfielder slamming the ball past Elliot with a minute of arriving. And unappealing as the prospect of a midweek replay in Wales was, further pain was soon to be inflicted by the visitors, Campbell left alone to head Peter Whittingham's corner in at the back post, Elliot again less than impressive.

With six minutes to play and both Loic Remy and Shola Ameobi stripped for action on the touchline, Obertan popped up on the United right and slung a low centre across the Cardiff box, only for Cisse to miss his kick. That proved to be the best his side could manage despite five minutes of added time, the moronic Steven Taylor reprising his goalkeeper shadowing antics ahead of a United free kick to willfully run the clock down, before becoming embroiled in some verbals with Campbell.

And so yet another opportunity to at least flirt with some overdue success is missed, this club seemingly intent on removing the slightest hint of ambition from its fans. The substitutions aside though, it's hard not to concur with Pardew's view that the line-up chosen should have been good enough to complete the task at hand. Not for the first time, they manifestly failed to demonstrate the required levels of commitment.

While last season's loss to Brighton was played out with an obviously weakened team, the first defeat there, the defeat at Stevenage and today's exit were all achieved by sides packed with supposed internationals.

In the end we found out nothing that we didn't know before, that beyond the first XI here lies very little. The manager's waffle doesn't endear him to many, but his squad have once again left him firmly in the clarts, with what looks odds-on like a fourth successive defeat in prospect when Manchester City come here next week. Revival? what revival?

PS: Cardiff's reward for their win was a Fourth Round trip to Championship side Bolton Wanderers.