22mins In a run and finish that has been compared to Gazza in some quarters (although that thought never crossed our minds), England prospect Ross Barkley took possession in his own half after United made a hash of their own corner.

Pushing forward at pace, Barkley took advantage of the shadow runs of two team mates and sped into the United box before shooting past Tim Krul in the Gallowgate End goal, having left Paul Dummett in his wake before Fabricio Coloccini slipped over to compound our flimsy defence.  0-1

52mins Further question marks over the covering of Paul Dummett, as Gerard Deulofeu pushed on down the right wing before crossing for Romelu Lukaku to shoot home from close range  0-2

87mins Deulofeu and Lukaku combined to play in Leon Osman, who promptly placed a fine rising drive beyond Krul.  0-3

"I thought we started the game really well - we had two or three great chances in the first five minutes, but you have to be clinical in this game and we weren't.

"There wasn't a great deal between the two sides in the first half, we have a corner and they break on us with a great goal in the end.

"We said to the guys at half time, there's not a great deal in the game, but we came out the second half and again got caught with that sucker punch.

"They have been clinical tonight and let's not forget we've played against a very good side tonight, they have to take a lot of credit for that.

"At 2-0, Vurnon (Anita) has a great chance at the far post, you never know if it puts that one away. It wasn't to be and they killed us off with that third goal, it's disappointing.

"I've spoken to the manager after the game and he's said pretty much the same as me.

"Of course (it will be good to have Alan Pardew back), he's the manager of this football club and it will be nice to have him back in the stadium so we can communicate even more."

Roberto Martinez (who sat alongside ex-Magpie Duncan Ferguson on the away bench, following his recent promotion from Everton's Academy to first team duties)

"I think Ross has got that sensational talent - you've seen that physicality; you don't get many players with that technical ability that can come with that physical element. He has both, to run across the whole pitch and score, it was a real joy to watch.

"We knew it was going to be difficult, you know you have to be perfect to keep a clean sheet at St James' Park.

"I thought our performance was complete in terms of our work rate and counter-attack. I thought we controlled the game for long periods of time.

"It was an away performance as good as it gets and perfect timing, the understanding of what was needed today was excellent and the players who came in put in a real shift.

"I think in previous away games we performed well but we haven't been good enough in front of goal. We had a great chance when Romelu Lukaku got in a great position but Tim Krul produced the save of the match.

"At that time it was a real question of how we were going to react. I thought the way we reacted with that desire, wanting to score goals.

"I think it's fair to say that this year's (Premier League) competition is as good as we've seen for many years. It is as good as you're going to get.

"When you get that sort of competition, you have to look at yourself, you can't afford to look elsewhere. I don't think we look at Arsenal, we must internally as a group work towards a points tally. When you see such an unselfish performance like today, that's what the fans are proud of."

This was Cheick Tiote's 100th Premier League appearance (96 starts, 4 sub) with the only goal being the memorable equaliser in the 4-4 draw with Arsenal.

PS: tonight's match programme carried a range of tributes to defender Steven Taylor, on the tenth anniversary of his first team debut for United, during a UEFA Cup tie away to Real Mallorca. 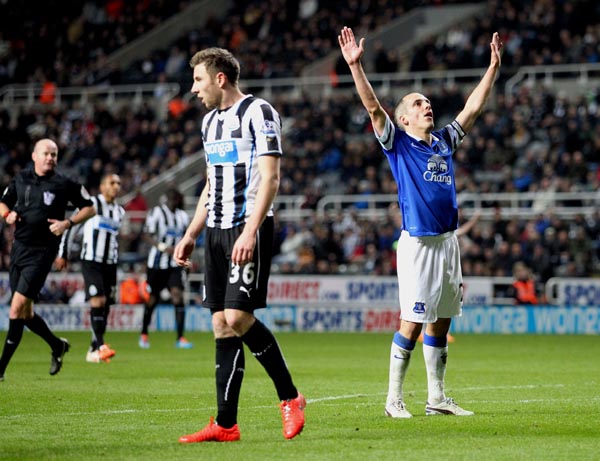 Three days after conjuring up an added time winner at SJP, United reverted to type with a display in equal parts careless, luckless and joyless - and duly punished by an Everton side who coped with what we had in attack and had the striking pace and power to pierce our defence.

With John Carver deputising on the touchline for the third and final time, a sixth home reverse of the season came as no great surprise, the same misfiring line-up that had squeezed past the Eagles coming a cropper against a side making a valid attempt to ensure European qualification.

However things could have been very different had a frantic opening to the game seen the Magpies score at the Leazes End for the first time in 2014 - Luuk De Jong, Papiss Cisse and Yoan Gouffran all failing from close in. At the other end meanwhile, Everton's on-loan forward Romelu Lukaku was denied by a smart intervention from Tim Krul, who rushed forward to block with a foot.

The visitors had failed to take advantage of half a dozen corners but went ahead in the aftermath of Newcastle's flag kick - Ross Barkley charging out of his own half and evading various challenges before blasting home midway through the first half.

United's attempted reply included a long range effort from Cheick Tiote that hit ex-Magpie Sylvain Distin and a spot kick appeal denied by stand-in referee Lee Mason when Cisse was impeded as a cross came in.

In the continued absence of Loic Remy, United were found wanting up front again - De Jong unable to make any impression on the game as he struggles to adapt to the pace and physical demands of the Premier League.

Lukaku had no such problems imposing himself though, forcing his way to the front post seven minutes after the restart to power home Gerard Deulofeu's right wing cross - both Krul and Mike Williamson requiring treatment before the restart.

Tiote had another long range effort saved by Howard and Gouffran thumped a first-time volley narrowly over the bar as Hatem Ben Arfa replaced De Jong and the home side set about chasing what already looked a lost cause. A fabulous run from the substitute into the area then set up Vurnon Anita 12 minutes from the end but somehow the midfielder shot wide with the goal gaping.

Had that gone in then the final minutes could have been very interesting, but instead Everton silenced home fans and emptied much of the stadium with three minutes remaining, when the numerical superiority of the visitors around our box ended with Leon Osman driving home.

That made for a slightly harsh full time score after a performance that was arguably better than the 1-0 wins here against Villa and Palace, and had more in common with the loss to Manchester City than drubbings here at the hands of the mackems and Spurs last month.

The lack of genuine choice in our team selection though manifested itself in another game when familiar problems came to the fore once again - midfield play predictable, crosses lacking in both quality and frequency, set pieces invariably laughable.

Miserable and sadly predictable - with no magic wand in the shape of an on-loan striker who knows where the net is. Thankfully we have enough points for this season, but the work required here even to tread water is sizeable.