16mins An intricate passing move involving Cabella and Gouffran led to the latter sending a low centre across the Town box from the right for Emmanuel Riviere to turn home from close in. 1-0

36mins Nottingham Forest loan signing Radoslav Majewski curling a right footed shot beyond Krul after the Polish forward found space on the edge of the box in front of the away support. 1-1

88mins Attempting to clear their lines, Huddersfield gave away possession deep in their own half and a run from Ayoze Perez was illegally halted by two covering opponents.

The substitute leapt to his feet and slipped a lightning-quick free-kick forward to the equally aware Remy Cabella, who instinctively lobbed ex-mackem custodian Joe Murphy via a slight deflection for his second goal in as many games 2-2

"We were tired in mind and body actually (after the Schalke Tournament) but it was a good game.

"I thought we moved the ball too slowly tonight. Iit was a bit different to the performance we put in on Sunday and I put that down to travelling and fatigue more than anything."

"It was a good workout. We played two teams in each 45 minutes as I didn’t want to overstretch the players just four days from the start of the season. It also gave us the chance to get as many players as possible time on the pitch against Premier League opposition.

"I thought we did OK in the first-half and scored a good goal. We did ok in the second-half as well; there was actually a little bit more attacking threat in fairness. That sometimes happens when you have a bit of youth in your side; they feel less pressure and have a real go.

"We caused them a few problems - as soon as we saw the team-sheet, we knew it would be a workout. That was exactly what we needed. We’ll give the players a day to recover tomorrow and then they’ll be back at Canalside on Thursday and Friday ahead of the game on Saturday. Tonight was a really good test and we’ve come through ok.

"I loved watching some of the younger players who have come in and shown exactly what they are capable of doing. It would be different to put them into a League game where there is more pressure, but the Championship is manic in its nature and it’s good to get them a taste of the action.

"There are some good players in that group. Even though it was only 45 minutes, it was against strong, physical, Premier League opposition and I think they ran out of steam a bit towards the end. It was good for them to play against the standard they should aspire to.

"There was also a really good cameo from Jon Stead; he was excellent. He’s worked his socks off in pre-season and I was pleased to see him ‘at it’ tonight. He was strong and gave us an outlet by getting hold of the ball – and he took his goal really well.” 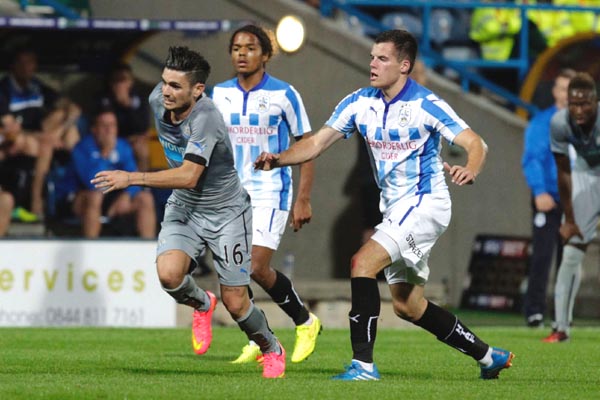 A third pre-season game in just four days looked to have taken its toll on Newcastle's players, but Alan Pardew will have emerged in positive mood from his side's trip across the M62 on Tuesday.

Taking to the field at the John Smiths Stadium on a fine night in West Yorkshire, United fielded what could well be their first-choice Premier League XI if Siem De Jong and Cheick Tiote aren't fit to start against Manchester City on August 17th.

Tim Krul was between the posts, there was a debut for his fellow countryman Daryl Janmaat at right back and Massadio Haidara started on the opposite flank. Fabricio Coloccini and Mike Williamson resumed their partnership, Moussa Sissoko and Jack Colback were in front of them, Remy Cabella continued on the left and Yoan Gouffran was towards the other flank.

That left a Franco/Argentine forward duo in the shape of Emmanuel Riviere and Facundo Ferreyra and the former Monaco player soon grabbed his third pre-season goal - netted like the other two from well inside the box, a good habit to have.

The 1,500 Newcastle followers present could have been excused for thinking that further goals would follow, but aside from a wayward shot from Cabella there wasn't a great deal to worry Alex Smithies - who was in goal for Huddersfield when the Magpies last visited, in 2009.

It wasn't all one-way traffic though, with the United defence needing a couple of last-ditch interventions to clear their lines - although they pleasingly attempted to fashion attacks through midfield on most occasions.

The home side duly fashioned an equaliser nine minutes before half time, slightly against the run of play but not undeserved. And playing their final warm-up game ahead of Saturday's Championship opener against Bournemouth, boss Mark Robins fielded a completely different side for the second period, Newcastle starting to chop and change their own lineup within ten minutes of the restart.

That had an effect on the tempo of the game, which was played a less intensity than the opening 30 minutes and saw United struggle to resume their passing game. Things took a turn for the better when Gabriel Obertan appeared from the bench and soon threatened down the right - latching on to a Riviere pass before holding off a defender and finding Cabella whose shot flashed wide.

Further replacements saw Steven Taylor introduced alongside Coloccini, but Town soon found a gaping hole in central defence and went ahead as the partnership got off to a disastrous start.

Into the closing stages and the grey-clad Magpies went in search of an equaliser with Rolando Aarons to the fore - going for the direct approach rather than heading out wide to deliver crosses that brought reward at Schalke.

Paul Dummett saw his 20-yard grass cutter bounce just wide on 80 minutes, before United's thirteenth goal of pre-season regained parity with two minutes to play through Cabella - who like Sissoko was playing his first 90 minutes of pre-season.

Local referee Andy Madley - who deserves credit for allowing United to gain an advantage from the quick free kick - then ended proceedings after one added minute, with a full time scoreline that satisfield both sides.

Jack Colback again caught the eye, while Daryl Janmaat made an impressive debut, looking slick and instantly at home. It's too early to make a call on the suitability of Facundo Ferreyra, while Moussa Sissoko put in a full 90 minutes as he plays catch-up in terms of pitch time.

Our lukewarm opinion of Mehdi Abeid remains unchanged after he maintained his record of appearing in every pre-season game, while Obertan's reintegration continues apace - aided by a cheerleading manager who talks of selling him but wants his judgement to be proved right.

While one enigmatic midfielder has overcome fitness issues and walked back into the side though, there's no sign of a similar rehabilitation scheme for Hatem Ben Arfa - playing up the road at Barnsley for the reserves a day earlier but not deemed worthy of public comment.

Like the "disappeared" Jonas Gutierrez and loaned-out Sylvain Marveaux, it's easy to recall a time when they were all shiny new signings, waving their personalised shirts and being lauded in similar fashion to Cabella etc.

What Pardew has to do now in addition to polishing his chosen XI is stay on board with those who don't get on the pitch against Manchester City - keeping them in a state of physical and mental readiness and happiness to earn their money when called into action. If he can't do that, then all we've achieved this summer is a wide-scale player exchange, where the names change but the (twisty) faces ultimately stay the same.

The growing number of players still on the books lacking a squad number remains evidence of Pardew's previous failure to accomplish that feat - and he now has rather more players to satisfy than previously, meaning that a little bit more should ride on cup team selections than merely filling a teamsheet for a contractual obligation.

Our most logical pre-season programme in recent years (in terms of timing and quality of opponent, if not in air miles) now concludes with the visit of Spanish side Real Sociedad to SJP on Sunday.

If nothing else, that will give the six new boys on show tonight (plus De Jong if available) with a first taste of playing at their new home before the serious business gets underway on Sunday week.

Spotted en route to the ground