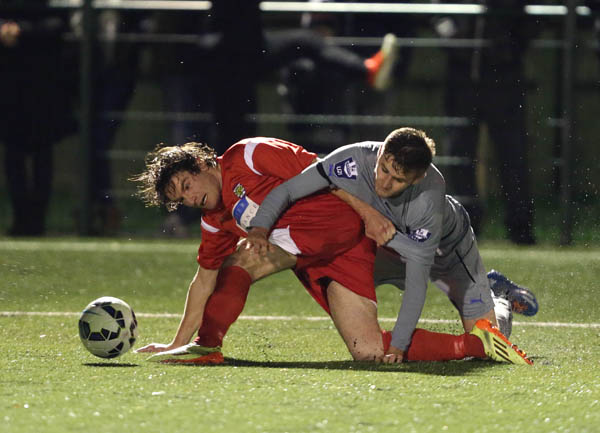 Having run out 2-1 winners last year when they inaugurated Consett's new ground and artificial pitch, plastic wasn't quite so fantastic for Peter Beardsley's U21 side at Belle View on Thursday.

The elongated nature of Newcastle's reserve league season saw them without a competitive game in almost a month and resulted in the staging of various friendlies in a bid to retain some sort of match fitness, albeit featuring less experienced lineups than had featured thus far in U21 league games.

United had defeated Northern League Second Division side 8-1 a week earlier but didn't have things as easy against the First Division Steelmen. Making six changes from the starting XI at Grounsell Park, the grey-clad Magpies matched their hosts in the opening stages, Alex Glliead and Jordan Storey testing Chris Elliott while opposite number Carl Robinson beat away Calvin Smith's shot.

Consett went ahead just before the half hour when Macaulay Gillesphey fouled Sullivan and Michael Mackay slotted home the resultant penalty. It then became the Luke Sullivan show, as the striker completed a ten minute treble for his hometown club, winning a one on one with Robinson before lashing home from distance and wrapping up his hat trick with a neat lob.

First half added time saw Adam Nicholls shoot home to make it five without reply, with Consett opting to make all five of their substitutions at the interval.

United did get on the scoresheet after 57 minutes when Jonathyn Quinn crossed for Greg Olley to sidefoot home, but the home side then quickly added a further two goals. Sullivan collected his fourth of the evening before ex-Magpie Chris Moore struck for 1-7.

The Magpies then staged something of a revival in the closing stages, Stefan Broccoli tapping into an empty net on 75 minutes before Tom Heardman shot home barely ninety seconds later. Striker Heardman then headed home Quinn's delivery with a minute to play before Broccoli was denied in added time by an athletic goal-line clearance from full back Michael Pearson.

PS: this defeat wasn't totally without precedent, with a Magpies XI of similar stature trailing 0-4 at half time and going on to lose 1-5 in a friendly played at Consett's old Belle Vue ground in 2007.