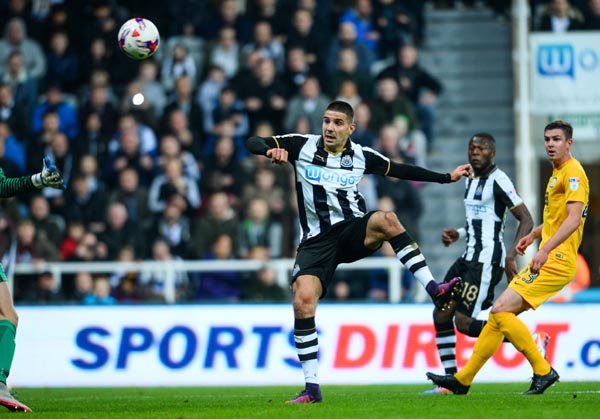 19 mins Isaac Hayden's forward advance was halted by Eoin Doyle at the cost of a booking. Matt Ritchie swung over the free kick from midway down the Newcastle left for Aleksandar Mitrovic to head home from six yards out at the Leazes End. 1-0 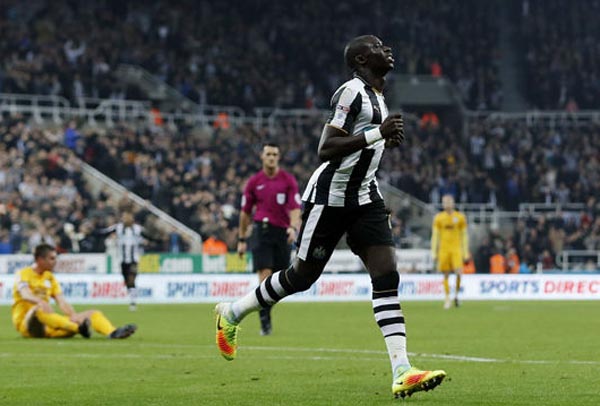 38 mins Mitrovic picked up possession and pushed upfield, attempting to pick out the overlapping Christian Atsu, only for Paul Huntington to intercept his pass. The ball rebounded favourably for Momo Diame and he drilled in a low shot from 25 yards. 2-0 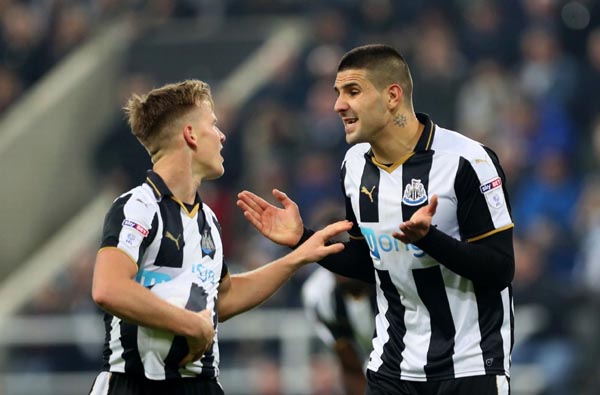 53 mins Matt Ritchie was tripped in the box by Bailey Wright and the referee pointed to the spot. Despite Mitrovic pleading to take the penalty, our designated taker hid the ball up his shirt before lashing it into the roof of the Gallowgate goal. 3-0 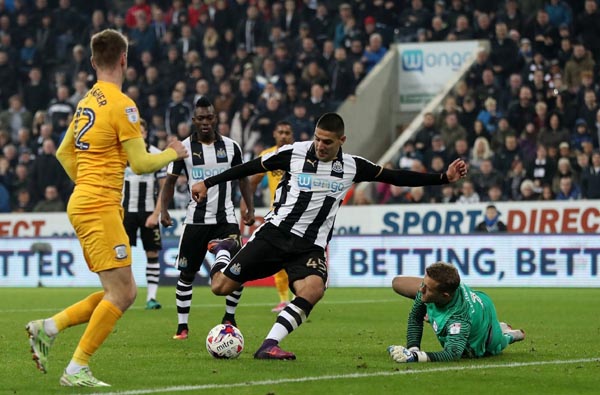 55 mins In an echo of Peter Beardsley's finish at Portsmouth in February 1984, Mitrovic took the ball down on his chest and left two defenders and the 'keeper on their backsides before finishing stylishly. Peeling off his shirt in celebration, he was promptly booked. 4-0 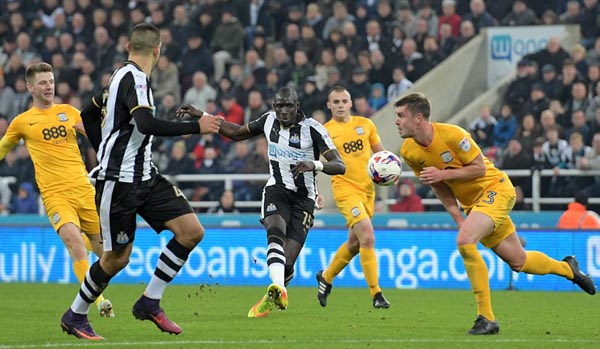 87 mins Afforded the freedom of SJP, Diame took Shelvey's pass in his own half and pushed forward before firing a dipping shot into the bottom corner of the net. 5-0 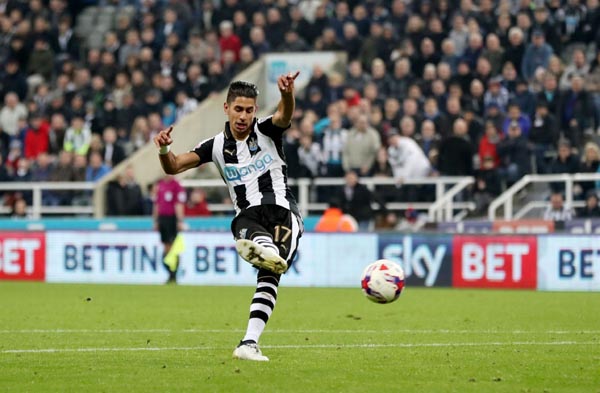 90+1 mins Shelvey's half-cleared corner reached Ayoze Perez in acres of space on the edge of the box. He buried his right footed shot, consigning the visitors to their heaviest defeat since they conceded six goals without reply in a League Cup tie at Blackburn Rovers in 1997 6-0

"It is important to have players pushing and trying to show they can do well. We have three or four players who have not been playing too many games. They come in and they play at this level, it can only be positive for the team and the future.


"I’m really pleased to see Mitrovic, Diame, Atsu, or even Yedlin. There were a lot of positives.

"I was surprised to see so many fans, but it is not a surprise in this case because they are coming and supporting the team and getting behind the team from the beginning.

"I’m really pleased to see so many fans, and really pleased also because we played well. We scored goals and they will enjoy this for two or three days.


"The difference between the Premier League and the Championship is clear, but can we win this competition? It is the cup, so I will never say never. Let’s wait to see what the draw brings us in the next round.

"I have to concentrate just on Preston on Saturday, wait and see what happens in the draw and after, maybe I can answer those questions. They will try to amend the situation, they will try to change things, we will be playing away, so it will be totally different.

"It's another competition, so we have to enjoy it. Normally I say one or two days and after, concentrate on the next game. It will be tough, for sure."

"It was a horrible night.

"When you give exceptional players time and room, you make it a long, long evening. It went from bad to worse with the sending off. This time last year, their manager was at Real Madrid, they are a fantastic side.”

Asked if Saturday's league game would be different:

"We could have played our strongest team from Saturday and still been beaten tonight. The league is our priority, but we are hugely disappointed and when you give exceptional players the time and room in the 18-yard box they’re going to punish you. Coupled with the sending off it was a long night.

"We’ve been on a good run beating Norwich, Huddersfield, Brighton and Aston Villa in the last month and we’ll go back to how we’ve done hopefully. It’s how you react to things - that’s why you’ve got to be careful what you say to the players after the game.

"We’ve been on a good run and this was always going to be a tough game for us against a team on a good run. The place was rocking and through basic mistakes we’ve contributed to them getting their win.

"I take nothing away from them because they have players that can hurt you but we made it easy for them and that’s not been like us. They had the luxury of making seven changes and some of them are top international players.

"We made the ones that we’ve made and I don’t think they make us any weaker but they give us a different outlook of how we can play. We’ve got 22 players who are very much similar but contribute in different ways.

"Tonight we haven’t done the basics right but when they make changes they replace them with internationals - there’s a difference. We made it difficult for ourselves and we’ve got something to prove at the weekend.”

Preston's Danish goalkeeper Anders Lindegaard made his third appearance at SJP, following our 3-0 win over Manchester United in January 2012 and a 4-0 romp for the Red Devils in April 2014. 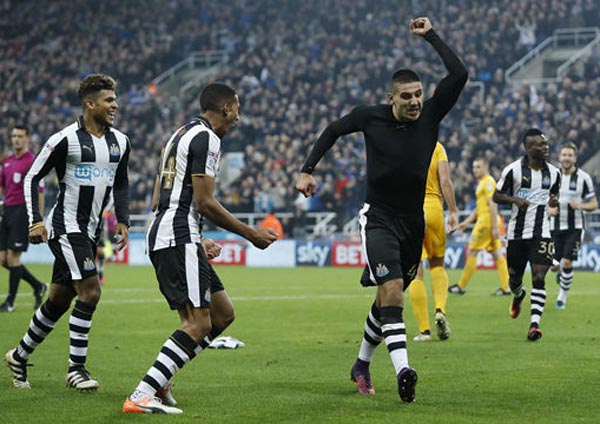 Despite seven changes to the side that beat Ipswich Town, a rampant Newcastle breezed into the last eight of the EFL Cup on Tuesday, scoring six without reply for the second time in ten games.

The second-largest St. James' Park crowd in the history of this competition saw the Magpies leave ten-man Preston battered and bewildered ahead of this Saturday's Championship re-match.

Dwight Gayle and Ayoze Perez were both omitted from Rafa's starting selection, but understudies Aleksandar Mitrovic and Momo Diame both bagged braces - the latter his first goals for the club.

Matt Ritchie fired another from the spot and Ayoze Perez added to Saturday's brace; United also hitting the goal frame three times and missed an open goal on a night. It could have been ten.

Trailing to a 19th minute Mitrovic header, the visitors hardly helped their cause when Alan Browne received a straight red for recklessly catching Jack Colback with his arm - the victim hospitalised for tests after taking a blow in the face when Browne's follow-through led to a clash of heads.

And in addition to being a man short, Browne's indiscretion also resulted in Jonjo Shelvey's arrival - and he proceeded to spray the ball to all parts of the pitch as United went in two goals ahead at half time - Diame driving home before somehow contriving to slice wide with the goal gaping.

Ritchie won a 53rd minute spot kick and despite Mitrovic pleading to take it, the designated penalty taker hid the ball up his shirt before lashing it into the roof of the Gallowgate goal to kill the tie.

At that point the disconsolate Mitrovic looked close to tears but soon perked up and netted his second of the night. Waltzing through the visiting defence in an echo of Peter Beardsley at Portsmouth in 1983, he finished in style before being booked for peeling off his shirt.

Further goals seemed inevitable and Christian Atsu tested the woodwork with both a curling shot and a header - Isaac Hayden having rattled a post at 0-0. Mitrovic failed to complete the hat-trick he craved - heading an opportunity narrowly wide - but Diame struck again from distance for 5-0, Vurnon Anita was denied and fellow substitute Perez rounded off what was an absolute rout.

In response, Preston belatedly forced two corners to ironic cheers from their dwindling following and former Magpie defender (and captain for the night) Paul Huntington saw his header blocked by Matz Sels - the only effort the visitors managed on target all night.

Playing with ten men for over an hour inevitably made this a damage limitation exercise for Simon Grayson's side, but to say that the dismissal was crucial to the outcome is to underplay the exhilarating quality and tempo of United. That was very evident at 11 v 11.

Having barely dirtied them, Sels threw his gloves into the crowd, while the SJP PA played "Freed from Desire" (the tune for "Mitro's on fire") with both the Gallowgate End and our Serbian quite literally jumping for joy - an amusing end to an uplifting night when everything simply went right.

The lack of a competitive element meant that tonight resembled the club's public training day at times rather than a proper match, but that was no consequence to thousands of bairns who had a great night. Having seen just one Newcastle win in the first six home League Cup ties attended, I'm deeply envious of anyone making their supporting debut here tonight.

United's pricing structure was also absolutely bang-on, cost savings on tickets quickly offset by visits to the food bar in many cases.

Our post-match headline was "Newcastle exhibition", while the Lancashire Evening Post echoed our  beer theme with "Newcastle Browne Fail". This was champagne football though  - and a pleasant change from the murky brown stuff we're been routinely presented with in cup competitions.