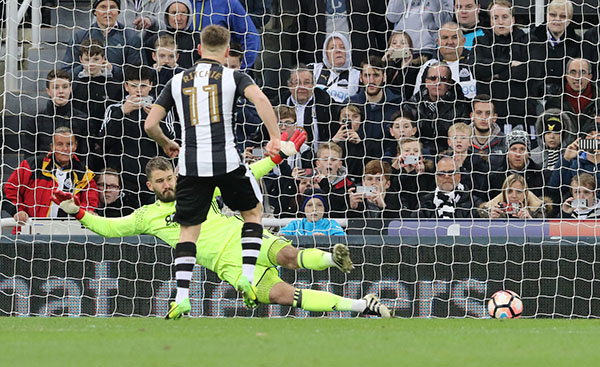 9 mins Jonjo Shelvey's through ball set Yoan Gouffran through on goal and he was tripped by Adam Legzdins for an obvious penalty. Matt Ritchie converted his spot kick at the Leazes End. 1-0 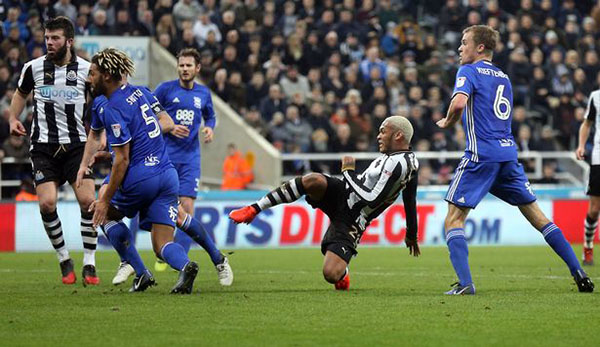 34 mins Some luck and some invention saw Yoan Gouffran double the lead, after a foul on Yasin El-Mhanni resulted in a free kick. Shelvey's delivery fell to the Frenchman, who kneed the ball up into his own path and took a second touch as he turned before firing home from 14 yards.2-0

71 mins Lukas Jutkiewicz's cross from the left was nodded down by Maikel Kieftenbeld, into the path of Cotterill who seemed to slice his shot but give it enough velocity to beat Matz Sels 2-1 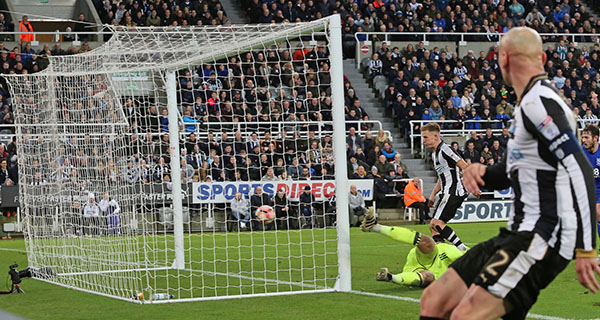 90+2 mins Shelvey and Perez combined down the left for the former to reach the byline, pulling the ball back for the unmarked Matt Ritchie to turn home from three yards 3-1

"I don't like to lie and I will say we will try to use the squad and go as far as we can, but using the squad because we know that we have so many games in the league that it's important to have everyone ready and choose the best players for every game without taking risks.

"We will try to win against Oxford if we can do it. It is a tough competition in England, it is always difficult.

"We will try to go through. When you play against any team in this stage of the competition at home, it has to be difficult.

"I said in the press conference before the game our fans have been amazing in the whole season. (In) the replay of the FA Cup to have 35,000 means how good they are and how important it is for them.

"We will try to give them something. My idea is to try and win every game, it does not matter which competition.”

On the returning Shelvey, who was made Captain:

"It is always important to have numbers in terms of players but especially someone like him who has quality and can pass the ball and make the others play.

"It is a big boost for us to see Jonjo dictating the tempo of the game. He was training really well. He needed to play for his match fitness. He will show in the next games how important he is.”

"Fair enough, they have a very good team. But it is also fair enough to say we caused our own problems first-half because we were playing very good football but made mistakes (for the goals).

"They were cheap and my players know that. That was disappointing.

"They went too easily through our defence on the penalty and we were actually in good position. We should have reacted earlier. We have to be more focused or you get punished like that.

"Second-half we were much better. We had better quality going forward, we closed them down more.

"We scored the goal and created a few more chances. The header (from Lukas Jutkiewicz that just went over the crossbar) I was jumping up because I thought it was going in.

"That was the type of performance I wanted to see (during the second half) because we need to be more brave and positive, like we were then.

"I know maybe we lack a bit of penetration. That is something we need to address."

"There were positives. When you lose a game, it is difficult to be speaking about the positives. But I do see a lot of good things happening and I am sure we will be winning soon." 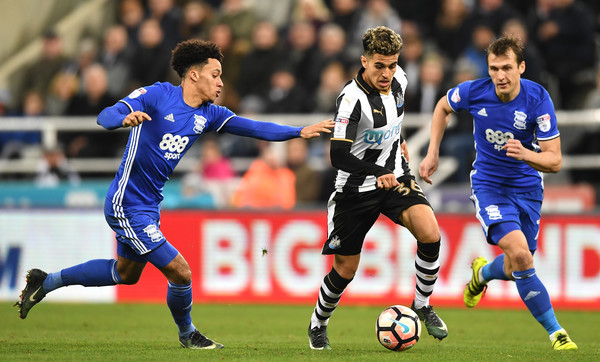 Newcastle ended a five year wait for an FA Cup victory on Wednesday night, as a much-changed line-up saw off Birmingham City at the second attempt.

Two ahead at the interval thanks to Matt Ritchie's penalty and Yoan Gouffran's effort, an apparently routine success became a shade more doubtful following a City goal from a rare forward move.

However the returning Jonjo Shelvey rounded off a classy display to provide Ritchie with an unmissable opportunity to seal the tie and set up a visit to League One Oxford United.

Shelvey's enforced five game absence had exposed our lack of midfield creativity, but a timely trio of telling passes led to three goals and a first FA Cup success since Blackburn Rovers were beaten here back in 2012.

A combination of injuries, international commitments and the unavailability of players due to loan deals present and past saw Rafa Benitez raid the club's Development side for a trio of debutants.

Stuart Findlay, Yasin Ben El-Mhanni and Dan Barlaser played for the U23s at Gallowgate against Aston Villa in December in front of barely 500 fans, little knowing that they'd be back at the same venue just weeks later to entertain a crowd of almost 35,000.

The trio all had their moments, central defender Findlay the most experienced after spending last season in the Kilmarnock first team and adjusting quickest to his surroundings.

Occupying a central midfield berth, Barlaser won't forget his 20th birthday in a hurry as he also played the full 90 minutes while El-Mhanni was given the outside left role and showed no lack of adventure. Both were experiencing senior football for the first time.

They were among six changes to the selection held 1-1 at St. Andrews, Gouffran playing as the lone forward and Daryl Murphy part of a strong bench including Rob Elliot for the first time since March.

Shelvey's first piece of magic set Gouffran away on nine minutes, only to be upended by City goalkeeper Adam Legzdins for an obvious penalty. Legzdins was booked and Matt Ritchie sent his spot kick straight down the middle into the Leazes net.

Gouffran came close to a second when cannoning Achraf Lazaar's left wing centre off the near post, but the Frenchman's sixth goal of the season arrived just after the half hour. Bought as a striker, those instincts looked somewhat rusty at St. Andrews but tonight he was an able deputy.

Ritchie was unlucky to see his effort hit the inside of the post and Barlaser scuffed the rebound wide near the end of a totally one-sided half, when the visitors allowed Newcastle infinite time and space to retain possession and dictate the pace of the game.

Referee Lee Probert ignored an obvious handball after the break when Legzdins raced out of his box and blocked Ritchie's lob and Gianfranco Zola's side took that as their cue to make a game of it, having introduced first-choice striker Lukas Jutkiewicz.

He caused Findlay and Grant Hanley some problems but it was David Cotterill who took advantage when United failed to clear, firing past Matz Sels.

Jutkiewicz then went close twice and United introduced Ayoze Perez, Isaac Hayden and Jack Colback in an attempt to regain the initiative, the tiring Cheick Tiote warmly applauded as he left the field on what may be his final appearance at SJP.

Halfway through four minutes of added time, Shelvey and Perez combined down the left for the latter to reach the byline, pulling the ball back for Ritchie to turn home from three yards and confirm our progression to Round Four.

A long way short of a classic then, but the novelty of actually winning one of these damn things made it enjoyable and the return of Shelvey turned it into a worthwhile exercise.

We'll inevitably come to grief against the first reasonable side we face, but if nothing else we showed enthusiasm for this competition and gave a convincing show of wanting to win the tie.

That's in stark contrast to previous seasons, when managerial decisions hinted that wasn't the case and moribund team performances seemingly underlined our worst fears and saw supporters begin to boycott these games.

Whether the trio of debutants will be seen again in a Newcastle shirt is open to question, with what some see as a brave piece of management viewed by others as mere opportunism and shirt-filling.

Regardless of recent press speculation about youth recruitment though, their appearance looks to have been purely Rafa's decision. He wouldn't be here now if the meddling was at that level - and equally this didn't appear to be an attempt to show the powers-that-be that the cupboard was bare and there's nothing coming through (El-Mhanni and Findlay were only brought in this season).

Had John Carver or Steve McClaren picked similar sides for FA Cup ties though, they would doubtless have attracted criticism for allowing loan players to become cup-tied (something we never used to do), meaning that Sammy Ameobi and Jamie Sterry were unable to feature tonight despite returning from their loan clubs into our first team squad.

When messrs Diame and Atsu were signed, the African Nations Cup schedule was known - and in addition to Mbemba, it was assumed that Lazaar would also be in Gabon rather than here tonight.

Similarly, reserve regulars Callum Roberts and Sean Longstaff can count themselves unlucky not to have played tonight, having gone out on loan to Kilmarnock earlier this month - although they are yet to feature competitively as the Scottish League is on a winter break.

Had that happened under a previous administration fingers would have been pointed. Barlaser and El-Mhanni have four goals between them this season for the stiffs; Longstaff and Roberts 17.

These aren't criticisms, just observations. As ever, perception is paramount and by not explicitly saying that he disregarded cup competitions, Rafa succesfully skirted round the issue of team strength. Actually winning the tie of course was a big help, minimising any dissenting voices.

Tonight's trio of new faces may care to ponder on the fate of Lubo Satka, Curtis Good and Haris Vuckic - brought in the last time that our recruitment drive went from regional to global; a policy once again being pursued by the club.

They're all still on the books, but long since consigned to the same scrap heap as former prospects such as Shane Ferguson. Hopefully the newest kids on the block will be nurtured and cared for to a higher standard than they were, assuming that there's enough raw material to work with.