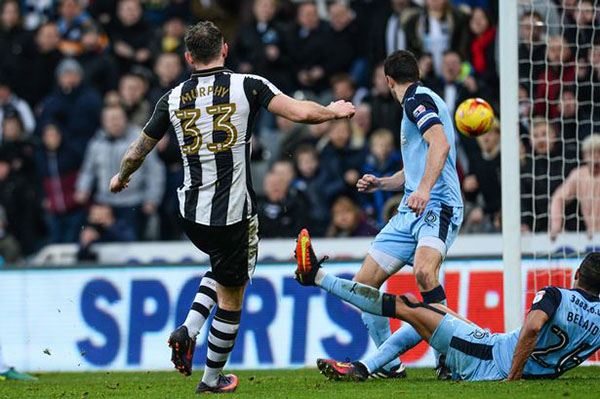 45+3 mins Jonjo Shelvey got to take a free-kick twice and the second time saw him ping an inch- perfect ball to De Andre Yedlin on  the right. The American volleyed a cross in to Daryl Murphy who took a touch and turned before curling a shot into the far corner of the Gallowgate goal. 1-0

49 mins Ayoze Perez played the ball to Yoan Gouffran who cut inside and ran across the edge of the box before shooting fairly tamely. Richard O'Donnell got down to save, but only palmed it straight to Matt Ritchie who had followed up and converted with a simple tap-in. 2-0

59 mins Lascelles played a measured ball to Yedlin down the right who looked to have overrun the ball with a heavy touch. However, he was able to reach it before it ran out of play and crossed it near post where Ayoze Perez met it at speed and found the back of the net. At first glance the contact didn't seem to be with his head; TV replays showed it went in via his right forearm. 3-0 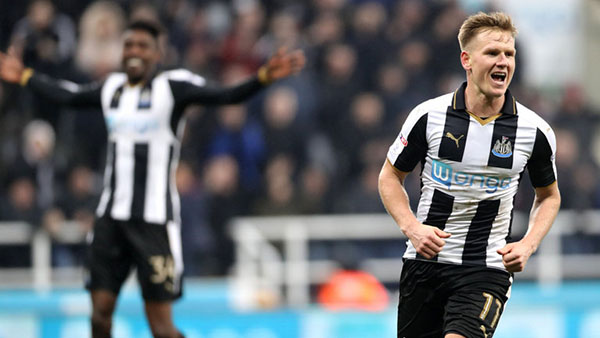 Sammy must have had his thick vest on

77 mins Shelvey led a counter attack and with runners right and left he delayed his pass perfectly until Matt Ritchie had space to run into and managed to dig out the ball to beat O'Donnell with a firm left-footed shot from just inside the box. 4-0

"We scored the first goal at the right time and then got the second at a good time too. We had a lot of chances, it was a comfortable win in the end.

"Credit to them, they were working hard and in the first half they made it difficult to play against.

"It was a frustrating first half, though I don't think they created too much.

"We needed to win, we did it, we scored four goals, got a clean sheet, three points so it was job done. It was a good day. We are going in the right direction.

"We knew before that it could be a difficult game in terms of confidence. We needed to start well and I think we had the control for 25 minutes and they were not creating anything then we made a silly foul in the middle, they got a corner, and we started to look nervous. We had problems and they grew in confidence."

About Jonjo Shelvey and the man-to-man marking ploy on him:

"Each one has his own tactics. He (Paul Warne) will be happy with what he was doing before (the goal), but once we score and if they stay focused on one player, then the others they can score.

"Maybe you have to manage it in a different way, but maybe it is fine for them. In the end, football is eleven versus eleven, so that is the important thing.

"You must remember that maybe if you stop playing you, will put the other team under pressure, but still you have other players who can have the players who make the difference, like Ritchie did.”

"We knew he was a very good player. He approaches the game with confidence. He has so much in his game, he brings the best out of other players. All the top midfielders in this division score goals and he is doing that. He is very important for us."

About Messrs Ameobi and Sterry:

"Obviously, they are cup-tied, so they I couldn't use them (against Birmingham City in midweek), but they are training well. I think it's important for them to play and for the fans to see them and also to give a rest for the other players that were a little bit tired.

"It's important to manage the squad because we play so many games in a few days that we need to give time to everyone. We must try to prevent problems and injuries: to see these players on the pitch and doing well is positive for the club."

Millers boss Paul Warne (who scored for Rotherham Reserves against a Newcastle side including Sammy Ameobi in 2009) said:

"We came and watched them play Birmingham. We marked Shelvey out of the game (in the first half). I thought Will Vaulks, I mean it's a disgusting role to do, was outstanding. He followed him everywhere.

"You could see him getting frustrated. we limited him to very little chances first half. We had the best chance of the game. we had attempts on goal and corners. Obviously, I'm not going to come here and play three up front. I'm not that stupid.

"I thought the way we set up was working a treat and we were more than competitive first half. We went toe to toe with them.

"Unfortunately, which was unforgivable I think, the set piece ...we had more than enough time to get in position, and Shelvey was like a quarterback, which we knew, puts a good ball in behind.

"I think Fordy (Anthony Forde) should have got in quicker. I said it to his face. He's given me his all, so I'm not going to hammer him. He (Daryl Murphy) turned and put it in just before half time. It was a psychological hit for the lads.

"They scored again and the game was away from us. I might be able to keep Shelvey quiet, but can I keep everyone else quiet?

"I thought it was a penalty (at 0-0). If Fordy had gone down he might have got it, but he was too honest and stayed on his feet.

"We limited them to very few chances in the first half, I thought the way we set up was working a treat. We went to toe-to-toe with them.

"My conversation at half-time was a lot more different to what I wanted to have and it was a psychological hit for the lads.

"They started the second half well and then the game was away from us, but I don't think our season will be decided on this game.

"They have got class and quality all over the pitch, they will be a Premier League club again next season.

"I am disappointed with how things went after the second goal, but I am not going to take anything away from them, I know what the result is." 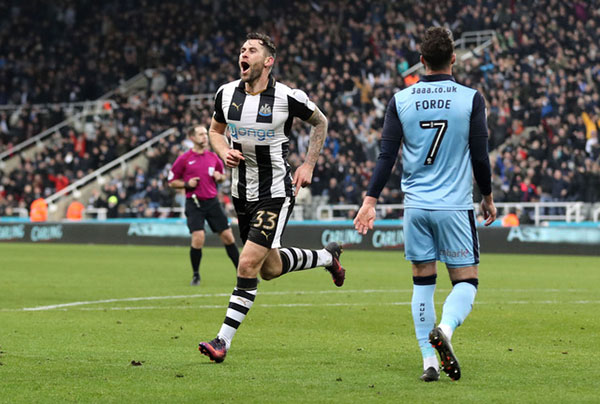 Newcastle returned to the top of the Championship after an apparently comfortable win over bottom side Rotherham at St. James' Park on Saturday.

However, the Millers were in the game until the very final seconds of the first half when Murphy blasted home, Karl Darlow somehow managing to deny the visitors on 38 minutes.

The Magpies goalkeeper looked set to slide out of his area in possession and let go of the ball, leaving the lurking Anthony Forde an apparent open goal.

Darlow may have clipped Forde's ankle and a superb tackle from DeAndre Yedlin halted the visiting player, but Jerry Yates then looked a certain scorer - before Darlow recovered to make an incredible block, despite being sent flying by colleague Ciaran Clark en route.

Having managed just single point on their travels all season, Rotherham would soon rue that miss as the hosts got an effort on target and opened the scoring. Forward duo Murphy and Perez had both put earlier chances over the crossbar, but the Irish international claimed his third goal in as many games three minutes into added time to the audible relief of the crowd.

Man-to-man marked by the Millers, Jonjo Shelvey's main threat in the opening half had come from dead balls (aside from one turn and shot in the box) and another delivery brought a breakthrough.

Sending a free kick from inside his own half to DeAndre Yedlin on the right hand side of the Millers' box, the full back's first-time centre gave Murphy the chance to stick out a leg, swivel and net.

The victory was then sealed within five minutes of the second half, Yoan Gouffran's grass cutter pushed out by debutant 'keeper Richard O'Donnell to give Ritchie the easiest of finishes.

Another assist from Yedlin saw him pull back the ball from the byline for Perez to end an eleven game barren run with his seventh of the campaign.

Opening up a two goal margin then saw the return of Sammy Ameobi to a Newcastle side for the first time since May 2015. Warmly welcomed, he looked rather sturdier than before and provided some excitement down the right without any actual end product.

That "like a new signing" phrase wasn't actually used, but perhaps Sammy can be compared to Fabrice Pancrate, who appeared during our last Championship season purely to make the numbers up - but was never expected to make the transition into the top flight.

Further home goals looked inevitable and the fourth duly appeared via a counter-attack, Shelvey sliding a pass through that Ritchie dispatched with ease.

On the bench after Jack Colback's illness, FA Cup debutant Dan Barlaser was denied a league bow when Jamie Sterry had a first outing since returning from loan at Coventry City, replacing Yedlin.

United now switch their attentions to a potentially tricky FA Cup tie before returning to league action with a pair of home games in quick succession. They do so without either of their highest profile strikers, but with stand-in Murphy justifying his place and a supporting cast back on form.

That of course includes Shelvey and it's the cause of some relief that he's made an effective contribution after his enforced mid-season break. Hopefully that afforded him time not only to recharge his batteries but also reflect on the folly of his actions.

This looks more and more like a two horse race with Brighton, but things may have been even more clear cut had our occasional England international not sat out those four league games.