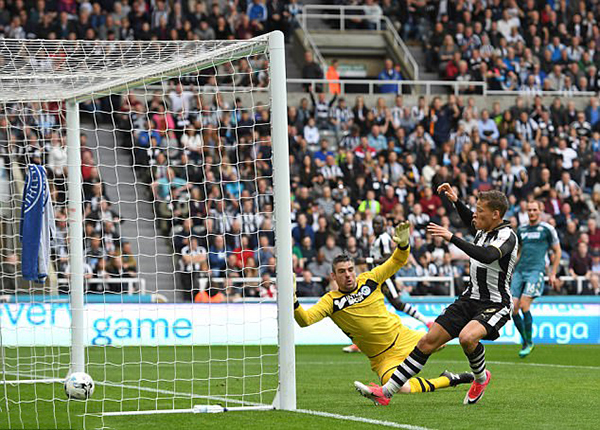 36 mins Vurnon Anita found Mo Diame as he ran into space down the right channel and the ex-Latic got ahead of Shaun Macdonald and threaded a low centre through from the right hand side of the area presenting Dwight Gayle with a tap in at the back post. 1-0

50 mins A harmless-looking throw-in by Stephen Warnock from just past the away dugout down Wigan's left was missed by Jack Colback and a general lack of effort allowed Alex Gilbey to move forward towards goal. Michael Jacobs took over and was able to evade the attentions of Jamaal Lascelles before neatly dinking his shot over Karl Darlow in the Leazes End goal. 1-1 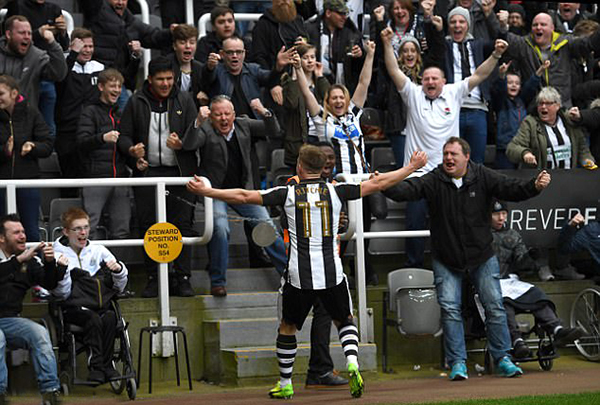 57 mins Paul Dummett's cross from the left was mis-kicked by Yoan Gouffran near to the penalty spot and the ball fell to Matt Ritchie who volleyed goalwards into the turf. The ball came back off the post and reacted well to nod home with Michael Gilks sprawled on the floor. The scorer booted a defenceless corner flag towards the Milburn stand before celebrating with the front row. 2-1


"I think if you analyse the season we have had a lot of good games. We’ve had high tempo and pushed and created with the ball really well. Today against Wigan we had 18 attempts so we must show more composure on the ball and in the final third.

"The main thing was to get three points. We knew it was difficult, watching Wigan against Aston Villa we knew they do well.

"This mini-league of eight games is now seven and we have won the first. The other teams have made mistakes so we have to concentrate on ourselves.

"The league table for us is that this is three points for us in the league. It was a win, I have to be happy. I would like to score five goals and be amazing, but at the moment we showed character, good reaction and personality.

"If you analyse the players we had (last season) ... in the end we were relegated, so these players don’t have that experience (of being top of the table). The players we’ve bought haven’t won trophies. We’ve been top all season more or less. It’s not easy, and that’s the point.

"People are saying these players have come from the Premier League: yes, but not from the top of the table or ones winning the league. These players were in the middle or the bottom of the table so we had to create an attitude where they play with confidence and winning mentality, which helps in games like this.

"But we have to be sure we show character, good reaction and personality. We have to improve a little bit on the ball and manage better under pressure. When we have chances we must manage a bit better.

"Physically, the team is fine – it's not an issue. You can see the other teams work so hard against us. You have to balance this effort. What we need now is a little bit more confidence on the ball to create more chances, or to take the chances that we have.

"When we are close to the box sometimes, you can see that anxiety is a problem, so to win gives you more confidence, and hopefully we can do a little bit better against Burton."

On the penalty incident:

"I was very proud of the players. Since I took over I’ve had a good period to work with them, over the international break, and I thought it showed in the performance.

"I thought at 1-1 we were in with a big chance, but they got the rub of the green with the second goal - and they took full advantage. It’s the kind of goal you do get when you’re top of the league - the kind we were getting towards the end of last season.

"Things went against us with Omar (Bogle) being injured, but I thought Ryan (Colclough) came on and did well. We couldn’t have opened up completely because obviously Newcastle - with the players they had on the bench - would have hurt us with their pace.

"We had to keep it tight, but I felt we could have won it, and there could have been a happy ending. We created a couple of good situations but we wasted them, if I’m being brutally honest.

"I don’t know if that’s me being biased, but we were getting into good situations. It’s all ifs, buts and maybes - and that’s part and parcel of football - that’s probably happened a few too many times this season.

"The support was great, the players were great, and it’s just the result that’s gone against us. We have to strive to maintain that level of performance for the rest of the season.

"I was pleased with how things went up to a point, but obviously in the position we’re in it’s not enough - but while we can play like that we’re in with a chance.

"They’ve got that little bit about them. The teams at the top just have that bit of quality that sets them apart. It’s that persistence from the first minute to the last, and it enables them to unlock the door.

"I know they’ve been under a little bit of pressure, and that’s what we were hoping to take advantage of here, but in fairness they stood up to it. I do think Newcastle are (destined to be promoted). The teams that are at the top have that little bit of quality that tells on the day. That can unlock the door for them.

"This is a fantastic place to play football. I know they were under a bit of pressure we hoped to turn the fans against them, but it wasn't to be. Newcastle brought players off the bench, had great pace in the side, but at 1-1 I thought we could win it.

"We got in good situations and we have to try to perform like that against Ipswich and Rotherham next Saturday. It's just the result that has gone against us."

On the penalty incident:

“It was just a heat-of-the-moment thing really.

"They thought it was a penalty, I thought he dived, but I’ve not got great eyesight to be fair. “We shook hands after the game, there were no problems there.”

Goals from Dwight Gayle and Matt Ritchie gave the Magpies their first victory in four attempts at a relieved St. James' Park on Saturday afternoon.

And although Brighton also won to remain just one point behind Rafa's table-toppers, Huddersfield lost to a 96th minute Burton Albion goal, stretching the gap between ourselves and third to ten.

There were two changes from the starting XI that drew at Birmingham City a fortnight ago, Gayle and Jonjo Shelvey in for Daryl Murphy and Ayoze Perez.

Another 50,000+ crowd at Gallowgate had little to excite them in the opening stages however and it wasn't until almost the half hour mark that visiting 'keeper Matt Gilks easily gathered Shelvey's shot.

A brief period of goalmouth incident then saw the black and whites force a couple of corners, Gayle coming close with a header and Jamaal Lascelles narrowly missing the target with a looping effort.

And the breakthrough wasn't long in coming, Gayle presented with a tap in at the back post in the 36th minute after ex-Latic Mo Diame got ahead of Shaun Macdonald and threaded a low centre through from the right hand side of the area.

The scoreline was unchanged at the interval and from the restart the home side seemed intent on putting the game out of Wigan's reach as soon as possible.

However, some brainless midfield play allowed the visitors to attack and Michael Jacobs supplied a 50th minute leveller than prompted his side's best period of the game. Toon fan Dan Burn then headed over before substitute Ryan Colclough shot across the face of goal moments later.

Again though, Newcastle had the happy knack of scoring quickly to bury murmurs of unrest in the crowd, retaking the lead within seven minutes when Ritchie - having a more involved second half - headed home the rebound from his own shot.

In truth that was the end of the action, with Wigan unable to seriously threaten a second equaliser, save for a couple of long-distance efforts.

Equally a third Newcastle goal seldom looked on the cards, Ritchie having one sight of goal after Christian Atsu played him but placing his shot too close to the 'keeper. The Scottish international's 84th minute run into the box then ended with him sprawled out on the turf following a trip by Jake Buxton. Referee Coote however waved play on - to the disbelief of home followers.

That incident caused a heated exchange between the two benches that required the fourth official to intervene - Latics interim boss Graham Barrow well to the fore with claims that Ritchie had taken a dive and bawling foul-mouthed abuse. Barrow of course has previous with us, going toe to toe with John Carver at the JJB following that horror tackle on Massadio Haidara back in 2013.

There was a welcome return to action for Isaac Hayden while Christian Atsu and Ayoze Perez also arrived from the bench; Gouffran, Diame and Gayle withdrawn with Wednesday night in mind, when Burton Albion make their maiden visit to Gallowgate.

And although we could start that game back in second place, victory over the Brewers would further the feeling of "when" rather than "if" automatic promotion will be mathematically secured.

Until that becomes a reality, everything else is immaterial - including performances and concerns that these lot will be eaten alive next season "up there". Those are worries for another day, the focus is firmly on finishing what we've started - and sharing the collective joy when achieved.