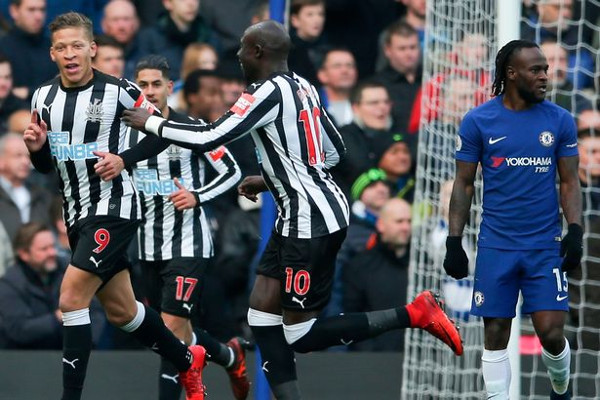 12 mins: A long ball forward up to Dwight Gayle was nodded down by the forward to Jacob Murphy and after exchanging passes, Murphy tried to round Courtois but ended up swallow diving into the turf as 'keeper got his hands to the ball but pushed it to Gayle to sidefoot into the unguarded goal.

There was some momentary confusion amongst the away support at the opposite end of the ground as to exactly what had been given: the goal, the penalty or even a free kick against Newcastle for simulation. 1-0

21 mins: A fortunate rebound off Florian Lejeune fell at the feet of Eden Hazard on the right side of the Newcastle box at the Shed End of the ground and his shot into the turf bounced up and over Karl Darlow, who had clearly expected to face a more cleanly-hit effort lower down. 1-1

33 mins: A high ball played out to the Chelsea right was back-headed weakly by Matt Ritchie to Victor Moses out on the touchline. The winger sent over a strong cross that Lejeune and Mbemba dived under, leaving Morata an empty net to head the ball into from close range. 1-2

74 mins: Moses picked the ball up on the right side of the area and Ritchie needlessly stretched to tackle but just took the player's legs, leaving referee Friend the easiest of penalty decisions.

Hazard dinked the penalty into the centre of the goal while Darlow dived to his left, unable to stop the Belgian from notching his sixth goal against Newcastle in eight outings 1-3


Asked if January would be a big month for Newcastle:

Asked if that was because of uncertainty about a possible takeover:

"We knew from day one that we would be in the bottom half of the league, it's not a surprise to anyone. We have to improve. It was good for a while, and after we were expecting to have some problems and we had our own problems, because we made our own mistakes

“Too many things were wrong after we made the first mistakes and after a lot of positives at the beginning, but to stay up? I think so.

We’re a young team that has to learn and has to improve, and we’re learning every week.

Asked if he was worried about his team's lack of PL experience:

"Individual mistakes cost us. When you play against a good team, with the players and quality they have, you will be punished. We were in the game and you never know what could happen.

"We played against a top side and gave everything, but these very good players make the difference. We will try to do our best now to fix things and see in January.

"The main thing is that we improve the little things to improve the team ahead of this big run of games."

"Eden (Hazard) played a good game. Today we saw a good link between him and Alvaro (Morata).

"In this type of game, when we decided to have a tactical solution, he had more freedom to play as striker and then offensively he was very dangerous.

"He played very well, scored twice, and the goalkeeper made two fantastic saves from him. He must continue in this way to improve himself.

"It was a good performance. Maybe our start was a bit a slow, not good enough.

"But after we went 1-0 down we played with good intensity and created chances to score. In the end it was a good performance.

"This team has a lot of professionals, when our start is not good enough there is always a good reaction, like against Liverpool.

"This team is strong for sure, we are in good form, good physical condition and strong tactically in defence and attack. We are working well and we have to continue in this way."

Dwight Gayle netted his second goal of the season and only Newcastle's second on this ground in five visits. The last time we led at Stamford Bridge - and scored in the first half - was the 2-0 victory here in May 2012 when Papiss Cisse netted the first of a memorable brace.

The Magpies fielded an entirely different starting XI from that beaten 1-5 here in February 2016, Jonjo Shelvey the only player who featured for us in both games (started in 2016, sub today).

For Chelsea, Courtois, Azpilicueta, Hazard, Fabregas, Willian and Cahill played in both games, all six starting in 2016 and the first four being joined by the latter two from the bench today. 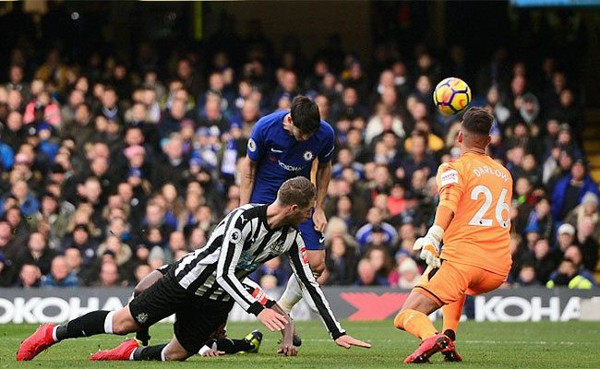 That's how long our number nine dream lasted, between Dwight Gayle feasting on scraps in front of goal and the home side rousing themselves to level with almost nonchalant ease before going on to do just enough to collect maximum points and move on to rather more searching examinations.

Ah well, it was fun while it lasted.

Another perverse kick-off time imposed by TV did nothing to stop 3,000 eternal optimists from parting with the lowest gate price here since 2001 and making a fair old racket as a bright start rapidly reverted to a familiar miserable finale.

Another tweak of personnel saw Matt Ritchie withdrawn to the left side of a back five, DeAndre Yedlin dropping to the bench and Javier Manquillo going across to the right as Chancel Mbemba returned to a central defensive role.

Mo Diame resumed in the centre of the park while Isaac Hayden was benched along with Joselu - leaving Gayle and Ayoze Perez to start a game for the first time since Huddersfield in August.

A breezy start was rewarded with Gayle's second goal in as many games, but two unforced errors and an illegal challenge in the area were ruthlessly exploited by Chelsea - leaving Rafa's side with just one point from the last 18 and teetering above the relegation places.

Karl Darlow made a couple of fine saves to keep prevent the score matching or exceeding the 1-4 deficit endured against Manchester United, but the difference between the sides was as emphatic - along with the knowledge that had the hosts needed more goals, they'd have probably got them.

The Newcastle goalkeeper had kept Hazard at bay once but was caught out by the Belgian not long after, before Ritchie's header gave Victor Moses the ammunition to fashion an unmissable chance for
Alvaro Morata, who managed to stay on his feet long enough to head the ball home from close in.

From that moment on, the game ended as a contest and although we at least managed to survive first half added time for the first time in four games, Moses evaded Ritchie again and was knocked over, allowing Hazard to cheekily add a third from the penalty spot.

The penalty incident sealed an unconvincing afternoon for Ritchie at left wing back, frequently left exposed both in front and beside as Chelsea pressed forward. Credit to him though for playing on despite having a broken wrist, encased in a protective plaster for the second game - there have been a good number of his predecessors who would have ducked out of active service.

For the second successive game Jonjo Shelvey started on the bench - although he was waiting to come on when the game was still at a theoretically retrievable 1-2, replacing Mo Diame in the aftermath of the penalty conversion.

Another anonymous afternoon for Ayoze Perez had earlier ended with his withdrawal in favour of  Isaac Hayden, while DeAndre Yedlin relieved Mikel Merino with five minutes remaining - the latter struggling manfully to try and offer a measure of midfield control and unsurprisingly over-run on occasion as Diame went for a lunchtime stroll. Is there a less effective current PL player?

The final stages saw a couple of rare Newcastle forays upfield - Murphy embarking on an epic run, Yedlin close to intercepting a back pass and Clark heading over. However they were no more than isolated instances of mild concern for a Chelsea side who had already engaged cruise control.

A fifth loss in six games left Rafa's side twelfth in the table, but results elsewhere ensured that they ended the weekend fifteenth: ahead of Huddersfield on goal difference, two points better off than Alan Pardew's West Brom, five in front of Palace and West Ham and six off bottom side Swansea.

Much like the visit to Old Trafford last month, we've had far worse days at this venue. But while the gulf between ourselves and them remains vast, coping with less glamorous opponents is where our short-term fate lies.

This was disheartening but all too inevitable - getting nothing from home games against Leicester and Everton would be rather more alarming, ahead of two more visits to London. Make no mistake, our hectic festive season actually started last week....

It may not have a direct effect among the squad as they prepare and play games, but the takeover - or lack of it - threatens to be a crucial factor in deciding which league we play in next season.

Barring a radical and rapid alteration of circumstances, our reluctant owner will be there in January - and hardly likely to throw money at a problem he no longer wants to be associated with. Regardless of how much backing from the stands the manager gets, that won't help us score goals.......

A lack of desire to sanction permanent deals of course leaves Ashley in danger of seeing the club's value fall in tandem with the league position - but it's unclear whether he'll even permit loan deals, unless players can be moved out of the club in January. That's a lot of work for someone to do.

That there are serious shortcomings in the squad is beyond obvious - the absence of Lascelles and Atsu heightening their importance to the side (something that can also be said of Paul Dummett), not least because of the lack of genuine alternatives in a small and shallow squad.

(As an aside, anyone seriously touting reserve forward Tom Heardman for promotion to the first team squad after his four goal haul last week needs to actually go and watch the U23s play).

Deadlock off the field and the consequent stagnation and downturn on it would hardly seem to be fertile ground for Benitez to continue to try and keep this show on the road - the prospect of him willingly adding another relegation to his CV not great, after another regrettable transfer window.

That then catapults us back to 2015, with a team managed by some second rate sap and the "we don't demand a team that wins, we demand a club that tries" banner back out - and rightly so.

Uncertainty is never very far away here, moments of fleeting joy like Gayle's goal to be savoured.