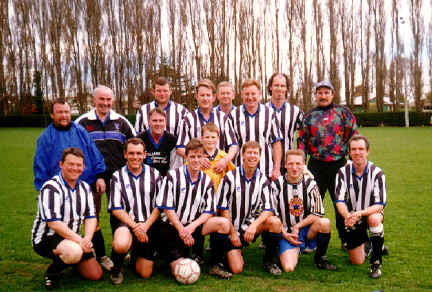 Thanks to Malcolm Baxter, the only one in correct team photo pose, with limp wrist draped over knee - bottom right. Fellow geordie in the toon top next to him is Alan Ord, while the rest of the crew are locals and a scouser, manc and jock who someone presumably felt sorry for.....

The HSOB lads train at St. James' Park, Papanui, Christchurch, which makes 5 SJP's we know of: The toon, Exeter, Alnwick, Christchurch and London SW1 (which is the only one Biffa ever graced with his silky hacking skills). Any more ???

It's appropriate that they get their place in the TAPIBAW Hall of Fame though, as they originally wore black and white shirts in the 1890's which had been obtained from Newcastle United by a local fishmonger!

These happy laddies are an A-League feeder club for our old chums DC United as well as the Tampa Bay Mutiny, and are looking forward to their first game of the season on April 1st.

Their opponents in an "exhibition" match (i.e. a friendly) are MLS big boys Dallas Burn, who visit the University of Richmond City Stadium in deepest Virginia.