80 mins Gini Wijnaldum intercepted a pass and Jack Colback looked set to pick up the loose ball but dallied and allowed substitute Mame Diouf to nip in. Xherdan Shaqiri did the rest, thumping the ball past a static Rob Elliot in front of the away fans as the rest of the side looked on.

There was a hint of a deflection but TV footage doesn't bear that out so why Elliot failed to dive as the ball flew past his right arm, only he knows. He may have been slightly unsighted but the shot was far from finding the top corner. 0-1

"We didn't deserve that.

"Jack Butland has become a bit of a curse this season for us. Four magnificent saves at St James' and one at the end there which denied us a point. That's the difference at the present moment.

"But, the last 18 days, we talked a lot about what we need to do and I think we started that process tonight in terms of attitude, work-rate and becoming harder to beat. I thought we were very organised, very disciplined.

"We stifled, frustrated Stoke - so much so that I think they had one shot in the second half and it's a goal. Treacherous conditions and I thought we deserved to fight our way to at least a point.

"If you had seen the performance at Chelsea compared to this evening...(it's) most definitely (an improvement). I thought there were good individual performances, a good team performance - you could see there was a determination, a work-rate for each other and a spirit there.

"This game's cruel and it's been cruel to us again. Dust yourselves down and we go again on Saturday." 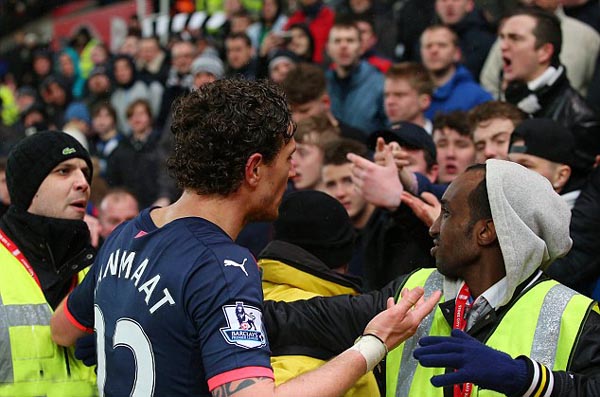 DJ approaches youngsters - and is blocked by Seydou Doumbia in disguise

Daryl Janmaat gave his own view of the post-match incident that saw him approach the away end:

“I could hear some swearing and that was understandable. I was there in front of the advertising boards, and my team mate (Jamaal Lascelles) came to take me away.

“I was very emotional after the game. We had lost. I understand the fans are not happy, but neither are the players. It was not my intention to 'confront' them. I did not want to get in a confrontation.

“It was more like I wanted to show I care, and say, 'Look I care. Look, we need you now. We need you because it is a really important period, the next couple of months.' That was the idea in my head.

"It was an emotional reaction. I do not normally do that. I wanted to say. 'Look, I understand you are angry. I am angry as well.'”

“The fans get behind us in games. This is a compliment. If I was a fan, I don’t know if I would be that generous.“It is in our own hands... We play against all our rivals down near the bottom. Bournemouth, Sunderland Norwich, Crystal Palace. It is down to us. We have to do it, simple.

"If we don’t get the points we need in these games we will deserve to go down.”

"The conditions were difficult and they affected the quality of the game. We were better in the first half, with the wind at our face, but we were grateful to a great strike from Shaq and a great save from Jack (Butland).

"I think it was unfair that their 'keeper was questioned as it was a great strike, and with the wind behind it, it made it more difficult for him.

"We're pleased with the three points - it's three wins on the bounce, we're in seventh and we're doing okay.  In terms of wins we're very similar in terms of what we've been able to achieve.

"There's other clubs who have a hell of a lot more resources than us and we're on a similar level at the moment.

"It's important to get momentum at this time of the year and it seems like we are. We've got a difficult game at the weekend against Chelsea which will test us.

"With the games that we've got left, we're confident that we will get a good total by the end of the year. We're hoping that's going to happen again.

"There's no guarantee of it but the way we work, the way we train and the standards that we like to keep right throughout the year, that sustains us. We don't allow their energy to drop or their focus, that's helped us every year I've been here, so we fully expect that to happen again."