14 mins Andros Townsend challenged Kolarov from behind and although the City player flung himself to the ground, the ref was always going to give a free-kick. Kolarov swung the ball over and Aguero headed it past Karl Darlow with only the goalscorer checking to see if the flag had been raised.

Quite why it wasn't only the ageing, balding linesman can say. Aguero was never onside at any point and clearly headed it. Once again an easy decision that went against us. 0-1 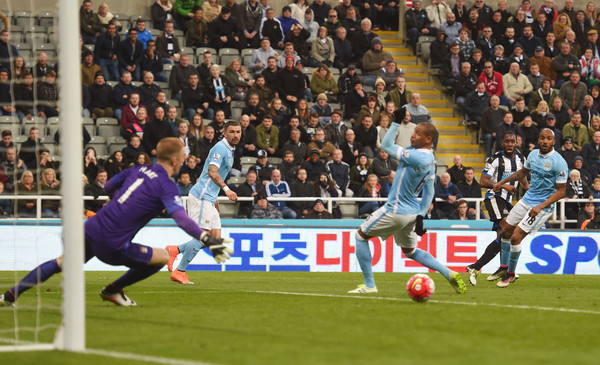 31 mins Townsend and Ayoze Perez won challenges in midfield and the referee played advantage with Moussa Sissoko in possession. Having just missed a one on one with Joe Hart, the United captain opted against shooting and spread the ball out to Vurnon Anita on the right wing.

The Dutchman's first touch was excellent and once he had cut inside Kolarov, he surprised everyone by curling a left-footed effort beyond Hart and in off the post at the Leazes End. 1-1

"The fans appreciate the effort of the players. Everybody is trying to do everything to stay up.

"Hopefully we have momentum, but we cannot have influence on other teams' games. We have to keep believing and hopefully win the next game.

"I did not see the replay but everybody says it (Sergio Aguero's goal) was offside. It was a pity. The reaction of the team was so good. We showed belief and fight. We have to be optimistic in the rest of our games.

"I was pleased with the reaction. Hopefully we will not have bad decisions in the next games. You have to try on the pitch and they tried.

"That incident could have got us fighting. Had they scored before that then maybe the fans would have felt it could be another bad game.

"But every single tackle we had the fans with us, that is really important, not just for this game. Everyone will say everything was positive, we want the fans to keep pushing and that will be crucial if we want to stay up.

"(I'm) pleased - very pleased if Gini had scored the goal - but really pleased because the reaction of the players, the way that we were fighting, the passion, the commitment, the relationship with the fans, everything was so positive today that it was just a pity that we couldn't score the second goal.

"It could be better, but it could be worse because you are playing against a team that is in form, it's in the semi finals of the Champions League and at the top of the Premier League.

"Before the game, I wanted the three points; after conceding the goal, to see the reaction of the team, one point could be fine; after Gini's chance, I was a little bit upset, but you have to be pleased in the end.

"We have to try to win every game, it doesn't matter where.

"My connection with Liverpool is obvious, it's quite good, but hopefully they will do really well in the Europa League and we can get three points in the Premier League.

"At the moment, it's true that we are doing well, so hopefully the game away against a very good team like Liverpool, we can see the same things. But you never know.

"What we have is belief. We believe now that we can fight, we can beat anyone and in the next games, we have to show that."

(Before kickoff, Rafa briefly lost his seat in the dugout to the young son of Moussa Sissoko, who was a mascot at the game. The Newcastle boss asked Sissoko junior for his autograph and he obliged). 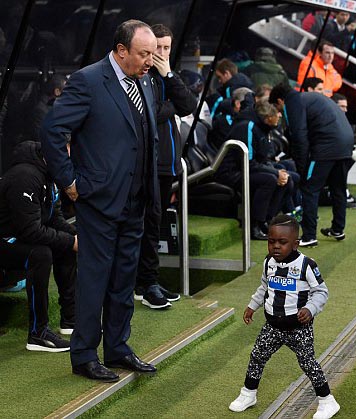 He's got more chance of playing than Doumbia...

"It's not a good result. We had some chances in the second half to score the second goal, but we didn't play well and didn't deserve to win.

"It is more difficult against these teams who are playing for their life. It's very important to have a high pace and maybe today we did not have too many creative players to create the space against a deep defence and that's why we couldn't win.

"I didn't see the energy that we had on Saturday. It was too much repeating just three days after the Chelsea game. At the end of the season it's not easy for the players to recover 100 per cent. The team was also different as we made some changes that's why it wasn't the same as the previous game."

"We knew also before the game that it was going to be a very tough game because Newcastle are playing not to be relegated next season. They had just won their last game, so it was a difficult game as we expected.

"I am happy for him (Aguero) because it's not easy to score 100 goals in the amount of games that Sergio did it (147). He's second in the history of the Premier League (Alan Shearer did it in 124), so I am happy for him and I hope he will continue the same way until the end of the season." 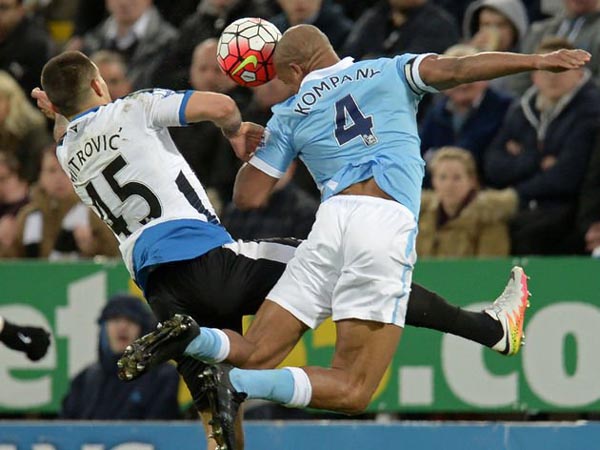 A much-prized victory may have eluded them, but United at least halted their losing sequence against City in league games at the thirteenth attempt, deservedly earning a point at SJP tonight.

The visitors went ahead from their first meaningful attack of the game in the fourteenth minute, when Aleksandar Kolarov's free kick was headed in by a clearly offside Sergio Aguero.

That completed a century of Premier League goals for him - eleven of which were against Newcastle - but the black and whites were undaunted and conjured up an equaliser from an unlikely source.

Joe Hart had won a one on one with Moussa Sissoko just before the half hour, but when the United captain found Vurnon Anita two minutes later with a cross field ball, the diminutive Dutchman advanced before tucking a low left footed shot home via the far post.

A game of relatively few clear-cut chances for either side saw Aguero go to ground in a fruitless search for a penalty kick early in the second half, but thankfully referee Kevin Friend wasn't fooled.

Karl Darlow then parried shots from Jesus Navas and Kevin de Bruyne to keep the score level, but City never dominated and were grateful to Hart for denying Georginio Wijnaldum a late winner.

Rafa Benitez had omitted Gini from his starting lineup and promoted Ayoze Perez in the only change to the side that starting Saturday's win over Swansea - leaving Jonjo Shelvey on the bench again.

The second half arrival of Aleksandar Mitrovic failed to have the same effect as it had done four days earlier, but the effort from United saw them rightly cheered off at the final whistle by fans with renewed optimism that disaster may yet be averted.

The uplift in performances has coincided with the installation of Sissoko as captain - although unlike some watchers we don't see much improvement from him other than expending greater energy.

As Rafa has hinted at though, Moussa's influence on the French-speaking players is almost as significant as his own displays and getting on the right side of him seems to be the key to coaxing messrs Tiote and Cisse back on to the field.

There seems little doubt that the trio see their futures elsewhere, but the concept of earning moves by performances for their current club is something Steve McClaren was never able to convey.

Six games in then and the manager is clearly having a positive effect on our pattern of play and appetite for the task at hand, even if we happen to fall behind.

Recovering to earn a point here, doing the same against the mackems and coming mighty close to taking something from Norwich after twice finding equalisers is proof that something is stirring.

Whether this revival is too late remains to be seen - and retaining Steve McClaren for February's Spain trip and the following two games may still be our undoing - but at least United are no longer sleepwalking towards relegation and alienating supporters in the process.