19 mins Matz Sels came off his line, chipped up the ball and lost control before clumsily barging into John Marquis. Andy Williams easily converting the penalty beyond the dive of Sels. 0-1

45+2 mins Williams was again on target with a soft back post header after a corner was missed and nodded back by Butler. 0-2

51 mins Substitute Isaac Hayden scooped home a deflected shot for his first goal in Newcastle colours, meeting a corner on the volley at the near post. 1-2

90 mins Eight goals in pre-season for United and eight different scorers, as Ayoze Perez provided a neat finish, beating a man and cutting inside before finding the net via a defender. 2-2

“Normally you say you have two halves, and in this game it was very clear.

“In the first half, we didn’t play at the level I was expecting, and we made two mistakes and conceded two goals.

“That gave them some hope that they could get a result. In the second half, we started playing like we wanted to play, passing the ball a little bit better and running behind defenders.

“It was a big difference. We had a lot of chances and their keeper was making some great saves.”

“It was a massive mistake for both goals - the good thing is that we can analyse these things now and try to find the reason why, and then the solutions.

“It is a friendly, but the feeling from the second half was much better and that is what we have to do.

“The first half is something that we have to improve for sure.”

"I can’t really say anything other than that we will have to wait to see what happens.

"He is still our player and that means he has to be ready for us. If something happens (with regard to Liverpool), we will know in some days.

"It looks like it could be close, but we still have to wait, because in football you always have to finalise things. At the moment, it is still a case of waiting with him.”

"Three of them are very bad (injuries). Young Joey (Wright) has dislocated his shoulder and gone to hospital. He’s only just come back from dislocating his other shoulder so he’s understandably upset.

“Out of the four, Joe Wright is probably the one we think will be fine. It’s a recurring injury that he’s had with his toe, but certainly the three in the second half look like quite bad ones.

"There’s no way they’ll be fit for the start of the season. It was a bit surreal because you don’t usually see that in any game let alone a pre-season friendly.

“It wasn’t played like a pre-season friendly which I was pleased about. It was a competitive game.

“Performance-wise I was very pleased with the first half. In the second half it was disappointing to lose a goal to a set piece but we had to dig in because they came on strong.

“Obviously the one thing we don’t want is injuries but we’ve picked up three tonight. We just have to get on with it. It’s part and parcel of the game." 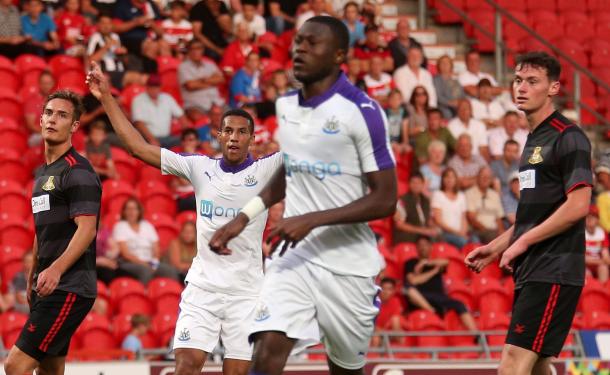 Irish side Bohemian had been the previous weekend.

In a temperature of over 20 degrees at kick-off, there was a minor surprise when Georginio Wijnaldum and Florian Thauvin both appeared on the bench, despite being omitted from the original team lineups - which prompted speculation that the pair had both left.

Rafa selected Adam Armstrong for the first time as Newcastle manager in a front pairing with Aleksander Mitrovic and the Tyneside-born striker almost opened the scoring with a volleyed effort on the quarter hour.

Going behind failed to rouse United from the slumbers though, with Mitrovic particularly immobile and what attacking threat we showed coming down the right - left winger Rolando Aarons seeing little of the ball.

Mitrovic's lumbering turn and low shot almost on the half time whistle summed up a pedestrian half for the white and purple clad visitors, but there was time for Rovers to double their lead - Williams again on target with a soft back post header after a corner was missed.

The former Arsenal player occupied a central midfield role and reduced the arrears seconds later, scooping home a deflected shot for his first goal in Newcastle colours and almost getting another soon after.

Attention was then diverted to the touchline as Gini warmed up, pointedly ignoring shouts of "we want you to stay" from the away end - although there were as many boos as cheers when he eventually came on (the same chant repeated for the absent Moussa Sissoko was a unanimous verdict of "we want you to go"....)

With injuries to home players and the inevitable round of substitutions becoming a distraction - two Rovers players left on stretchers and two more hobbled off - our attempts at getting back into the game weren't wholly convincing, despite dominating possession.

Some decent interplay from Jesus Gamez and fellow countryman Perez down the left was encouraging, with the latter striking the base of the post on 74 minutes, after the referee ignored penalty claims for handball.

What looked like a golden chance to level near the end was missed by Yoan Gouffran, who somehow managed to put a first time shot over the bar from four yards after Gamez had centred to him from the left flank.

However Ayoze Perez was on hand to provide a neat finish in front of an upbeat away following of 2,500 just as seven minutes of added time began. It ended honours even.

This report is dedicated to the memory of Lee Hope, who sadly lost his battle with cancer at the tragically young age of 34. Our condolences go to his family of staunch Toon fans.