77 mins A fine forward pass from Dan Barlaser found Jacob Murphy out wide on the Newcastle right and he jinked infield despite the attentions - and attempted block - of a visiting player.

Reaching the right hand byline Murphy advanced under strong pressure from another defender and was eventually hauled over. He confidently converted the resultant penalty. 2-1

“We knew that Barnsley after staying up in the Championship last season, would be a step up from Crewe, they press high and have a lot of young lads.

"From a positive point of view you know, we came through it. The aim was to give the lads, the vast majority of the squad, 60 minutes.

“We did a little bit more with Jonjo [Shelvey] and Isaac [Hayden] playing maybe 70/75 minutes, which was pleasing.

Towards the end we had one v ones with Almiron, with Allan Maximin, with Matt Ritchie.  We had chances and Andy Carroll scored a terrific goal, great run forward by Jonjo Shelvey and great finish with his left foot.

"Ultimately, we are two weeks away from West Ham and physically we feel we are in decent nick.

"Jeff hasn’t played much football since March, he missed the back end of Burnley’s season but you can see in training he is a good footballer.

"He is really good condition physically and I think it is important like any new player when they come to a club, to fit in with his team-mates and how they play, where they play.

"You can see he has got a good understanding of how to play the game, I think he will be a terrific signing for us."

"Obviously Jacob has genuine pace, had a good season on loan at Sheffield Wednesday last season. I think confidence is the key word.

"He has got genuine pace and he also added goals to his game last season in the Championship, he finished with nine goals.

"A successful loan period and he has certainly taken the manager’s eye in this short pre-season so we will just keep on at Jacob to continue his work and I’m sure that he will be around it this season.

"For a striker to score two in two, whether pre-season games or in the season, it is all positive really.

“Big Andy, we know his strengths, sometimes though he gets underestimated for his technical ability.

"When Jonjo (Shelvey) cut the ball back with his left foot, he (Carroll) smashed it into the bottom corner, so he is in a good place.

"He has had a pre-season now and he looks fit and he looks lean and he will be pleased with his contribution in these two games and both goals."

"Newcastle had a lot of luck with many chances that we have, but this is what we can speak about with the boys, that we must score more goals – especially in the first half.

"In the second half, in the first ten minutes, we had so many chances to score goals. We dominated the game and in one situation we didn’t have the right focus and the opponent took the lead, but I think, in the end, it was a very good test for my boys.

"Everyone had the chance to show me a good game and I’m very happy with the players – this was the next step in our pre-season.

"We always had control on the ball; it wasn’t easy with the wind against us, but we had the ball on the ground and played very quick in the position.

“Newcastle had a lot of problems with our quick game and forward running. I think we had good timing in our game and control, and I think this was the goal.” 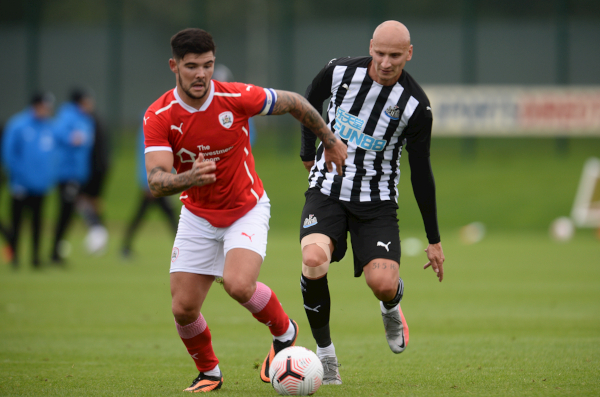 Newcastle maintained their 100% record in pre-season on Saturday with a second victory over lower league opposition -  this time back at Darsley Park.

As was the case against Crewe, United led 1-0 at the interval through Andy Carroll's strike - following a move down the left by Jonjo Shelvey and Matt Ritchie.

Rather than swapping the entire side at half time, Steve Bruce left his outfield players in situ to complete an hour before making changes.

By then the Championship side were level, Marcel Ritzmaier taking a pass from Kilian Ludewig and beating Mark Gillespie from close in on 54 minutes.

The Magpies felt that they were denied a penalty on 72 minutes when a visiting player looked to use a hand in blocking Jacob Murphy's strike on the goal-line.

However Murphy was awarded a spot kick just five minutes later after he was fouled in the area, having raced on to a fine forward pass from Dan Barlaser.

With both Shelvey and Ritchie off the field, Murphy fired home the penalty to increase his goal tally against the Tykes - having netted against them on his debut for Sheffield Wednesday last season.

Speaking after the game, Magpies Coach Steve Agnew praised Murphy and appeared to suggest that the player may remain on Tyneside this coming season rather than be loaned out or sold.

There was a debut for Jeff Hendrick, while Ritchie returned after missing Tuesday's game. Neither Matty Longstaff and Jamaal Lascelles were involved.

The injured trio of Martin Dubravka, Fabian Schar and Dwight Gayle were all missing, while Yoshinori Muto and Achraf Lazaar haven't returned to pre-season training as attempts continue to move them on.

Also conspicuous by his absence was record signing Joelinton, with the club still to comment on rumours that he is in quarantine after an overseas trip.

Despite the lamentable lack of strikers in the squad, there was no call-up for Elias Sorensen, who featured for the first team ahead of last season after signing an extended contract. He turns 21 next month.

Last season's U23 top scorer Tom Allan meanwhile has departed on a season-long loan to Accrington Stanley and was leading their attack against Salford in a kickabout on Saturday afternoon.

The third of United's four warm-up games sees them trek to another field on Tuesday to face Boro on their training pitch at Hurworth, before fellow Championship side Stoke City visit SJP on Saturday.