Nobody from NUFC said anything - at least in public....

"We worked hard. You could see both teams are in pre-season and experimenting.

"I was delighted with the work ethic we showed, and we played some good football.

"It’s all about building up to the first game. We're getting a bit sharper and I think we can get better.”

"The pitch was good and the opponents were good, but it was nice to take our chances and see the goals go in.

"You can’t judge too much in pre-season games, the season is different when it starts, but I was pleased with my own team.” 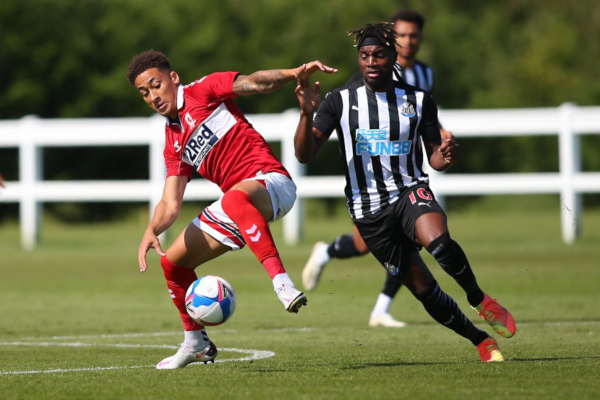 The game was played behind closed doors at Boro's Rockcliffe Park training ground, Britt Assombalonga shooting the hosts ahead on seven minutes.

The home forward then doubled his side's lead before Marcus Tavernier - brother of former Magpie James - fired past Karl Darlow from distance.

It was 1-3 at the interval when Allan Saint-Maximin netted with a solo effort - with Andy Carroll on the bench then presumably ASM was at centre forward for the first hour.

Boro's Lewis Wing and Jamaal Lascelles were then both dismissed after an off-the-ball incident early in the second half.

Grant Hall headed in the resultant free kick before the Tees barrage was completed late on, when Stephen Walker placed his penalty kick beyond replacement custodian Mark Gillespie.

Once again there was no sign of Joelinton or Yoshinori Muto, while Emil Krafth and Jeff Hendrick are now away on international duty.

Before next week's meeting, Neil Warnock's side are League Cup action, at home to Shrewsbury Town on Friday. The Magpies have another friendly against Championship opposition on Saturday, when Stoke City visit SJP.

NB: All games are behind closed doors.