19 mins A clearing header from Danny Batth reached Lee Gregory and he found Sam Vokes wide on the left flank. Under pressure from Isaac Hayden, he slipped a pass infield to Sam Clucas, who accelerated away from Sean Longstaff and released Nick Powell.

The midfielder in turn found the overlapping Tom Smith and as he reached the right hand edge of the United box, he clipped a cross over the dawdling Javier Manquillo towards the back post.

Having run the length of the field, Sam Clucas watched as the cross dropped over DeAndre Yedlin before powering a header beyond the helpless Karl Darlow in the Gallowgate End goal. 0-1

"The good part today is that we picked up no injuries.

"We have had a very difficult couple of weeks in terms of people who we thought were going to be OK after lockdown, certainly haven’t recovered, people like Dummy (Paul Dummett) and Ciaran Clark.

"We’ve picked up injuries which were unfortunate. Dwight (Gayle) got injured against Crewe some 10 days ago, has an operation today, which will rule him out for at least three or four months.

"So that has been a disappointment, all in all it has been a very difficult couple of weeks and we can’t deny that.

"However, we have got one or two things working behind the scenes in terms of players coming in.

"I think it has been publicised and I think all the supporters are eager to see it happen. We are close to one or two things, so let us hope in the next 24 hours, 48 hours we can bring one or two in.

“It was a wonderful opportunity for the young ones, (Jacob) Murphy and (Dan) Barlaser in particular, they didn’t do themselves any harm. There’s always something positive.

"You can’t really look into results at the minute, the results and the real thing comes out next week, so I am pleased that nobody added to the injury list, we have got far too many and a few on international duty.

"It was a patched up team to say the least, I think we could only put out three or four subs.

Dwight (Gayle) is the immediate one. We know Fabian Schar dislocated his shoulder, that was only three or four weeks ago, so he ain't ready.

"Matt Ritchie picked up an injury only two days ago, so all in all we aren’t too serious but we haven’t had time to recover in terms of Clark and Dummett in particular. They are playing catch up a lot.

"More than ever we need two or three people to walk through the door and give everybody a lift. We are working as best we can to make that happen.

"Any dressing room needs to have a spark of somebody coming in to the squad that can help us. Certainly at the minute we need a bit of help with the problems we have got, before we even start.

"We know what we are trying to achieve in trying to get there and hopefully before the window closes, we will have four or five in the door, which will certainly improve us.

"With that first Premier League game a week away. things could look a little different? I’m sure it will be totally different to the way we looked today.

"Jamaal (Lascelles) will be available for a start and you know, it has been a difficult couple of weeks, there is no denying that, but we will keep bashing away, we are working tirelessly behind the scenes to make one or two things happen.

“I am very confident that we can get them over the line in the next few days." 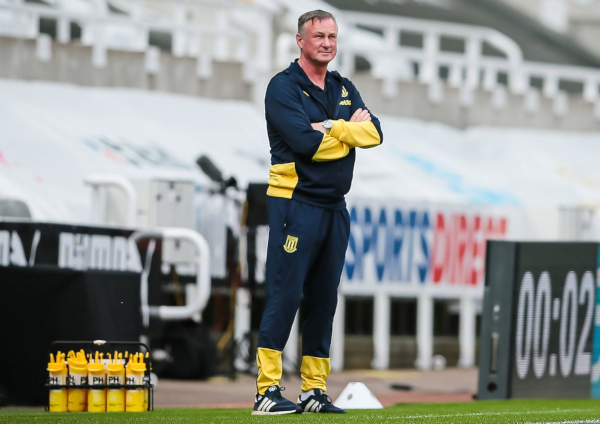 "I was really pleased with a lot of what we saw today against very good opposition. Our attitude to the game was first class.

"We had to defend for periods in the game which we knew we would have to, and I thought we did that extremely well. We also attacked at the right time.

"We scored an excellent goal and had other chances where we could have perhaps been a little bit more clinical, but equally we restricted the opposition to very little to very few chances, so it was an extremely good workout.

“I think what you have to recognise is that we have a lot of players in our dressing room who have been in the Premier League at one point or another in their career, so without being maybe disrespectful to when we play League One teams for example, and the game’s a bit slower, we don’t seem to be at our best.

"Today the game was quick, and it had to be quick because the opposition make you play quick. When we play quickly we are a much better team. There is still a lot of work to do though.

"I thought we looked very assured in the 3-5-2 formation today. I think with the players we have at the club at this minute in time it suits us, so we will continue to work on it.” 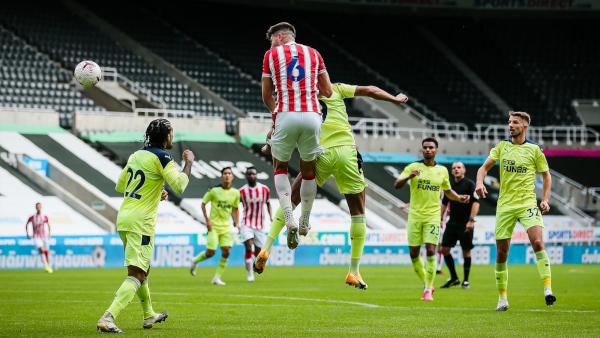 An under-strength Magpies side suffered a second defeat of the week to a Championship side, beaten by the Potters at St. James' Park on Saturday.

Once again playing behind closed doors, Newcastle debuted their yellow change strip, with City clad in red and white.

The only goal of the game came on 19 minutes, when Sam Clucas headed Tom Smith's centre beyond Karl Darlow in the Gallowgate End goal.

Online highlights later confirm. For Steve Bruce though, the main objective and first item of business in his post-match comments were that his injury list hadn't lengthened still further.

There were bench places for Joelinto and Yoshinori Muto after they belatedly commenced pre-season training on Thursday, but the game came too early for fellow returnee Fabian Schar.

Jeff Hendrick and Emil Krafth are both absent on international duty, while Jamaal Lascelles didn't feature following a red card against the Teessiders.

Dismay at the outcome of this game was tempered not only by the lengthy absentee list, but also growing optimism that genuine breakthroughs in the transfer market were nearing, albeit just days from the serious stuff starting.

That belated activity is predicted to bring in a trio of players whose last employers suffered relegation, but at the risk of being labelled xenophobic, we don't have a problem with that. After too many years of seeing overseas players struggle with an alien league and lifestyle after moving here, the tried and tested seems like a sensible, if mundane, approach.

It appears that the recruitment plan sketched out by Bruce has found favour with an owner whose main motivation remains to stay in this division. Our genuine concern was that after retaining top flight status with no real panic, the folly of 2012 (when only Vurnon Anita arrived) would be repeated.

Perhaps the Gayle injury and the Boro drubbing will prove to have been pivotal in making things happen; shaking us from a collective stupor. Make no mistake, something needed to.

Of those already here, it remains to be seen whether favourable comments from the Manager regarding Dan Barlaser and Jacob Murphy translate into a place in our squad for the coming campaign.

If anything sums the up the folly of our pre-season though, it's that fellow midfielder Henri Saivet ended up appearing in all four kickabouts - despite his manager confirming that he has no prospect of making what would be a first competitive appearance for this club since January 2018.

It's tempting to blame the pandemic for our rushed preparations and various other top-flight clubs have been slow to augment their squads. However the experience of previous seasons indicates that being a work-in-progress is Newcastle's default setting.

It's not only the ball that we struggle to get over the line: if this collection of players doesn't look radically different by the time the window shuts then we're in grave danger of a third demotion during the Ashley era.

What won't change though is the absence of Martin Dubravka from the side that begins the season. That last line of defence was crucial last time round and Karl Darlow has sizeable shoes to fill.