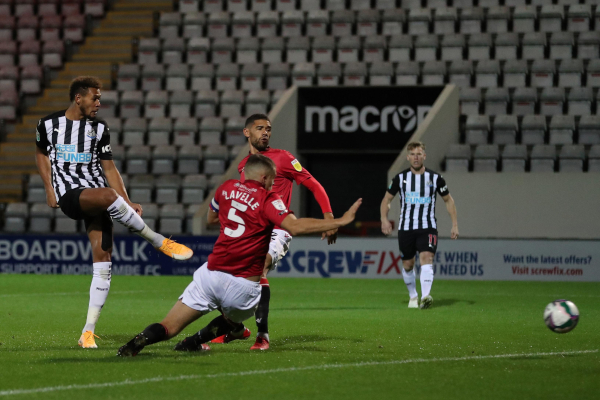 5 mins A nice interchange between Jacob Murphy and Emil Krafth on the right hand side of the area saw the Swede cross to Miguel Almiron, who teed up Joelinton to sweep home in front of the unoccupied away end. 1-0 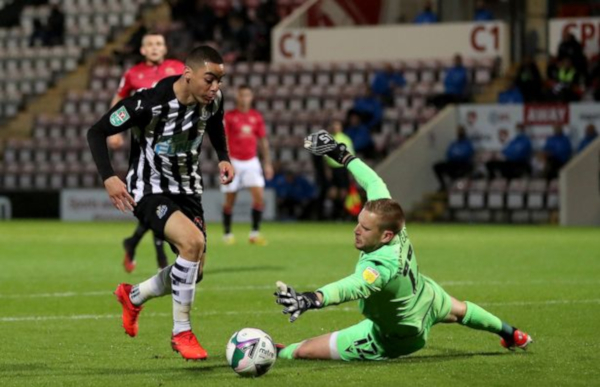 20 mins Murphy's measured pass to Miguel Almiron saw the Paraguayan's pace take him clear of the defence and round the 'keeper. Fleetingly delaying his shot in an echo of Peter Beardsley at Portsmouth in 1984, Miggy then lashing the ball past the defender on the line and high into the net. 2-0 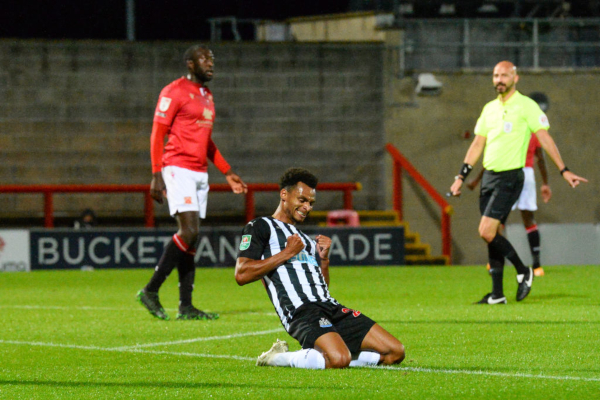 27 mins Jacob Murphy attacked down the middle of the field with the ball from inside his own half, riding the challenge of Stephen Hendrie before pushing on and curling the ball home stylishly from the edge of the box. 3-0 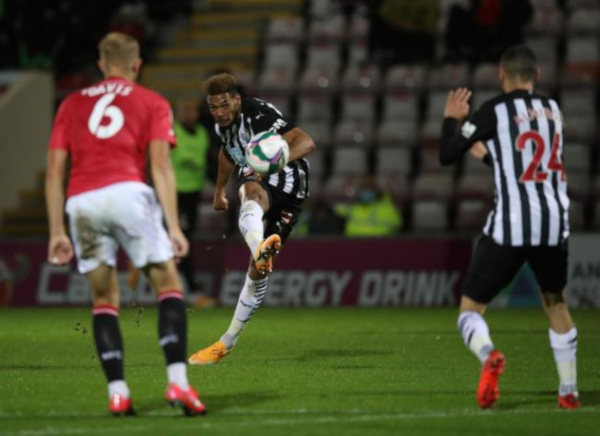 31 mins Joelinton cut in from the left flank to unleash an excellent dipping effort that found the corner of the net. 4-0 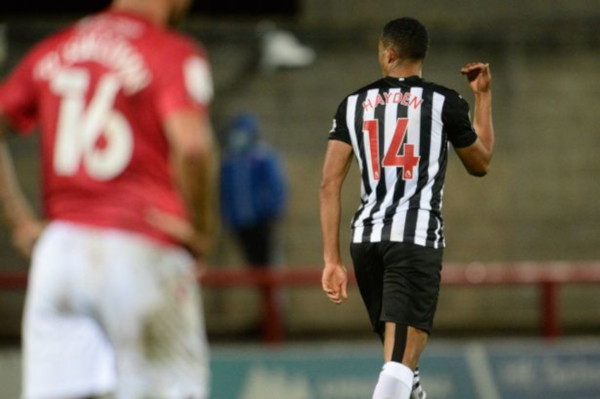 45+2 mins Midway in the Morecambe half, DeAndre Yedlin played the ball infield to Isaac Hayden who struck his shot firmly from outside of the box, easily beating 'keeper Mark Halstead. The writer covering the tie for the local paper claimed that there was a slight deflection off a home player. 5-0 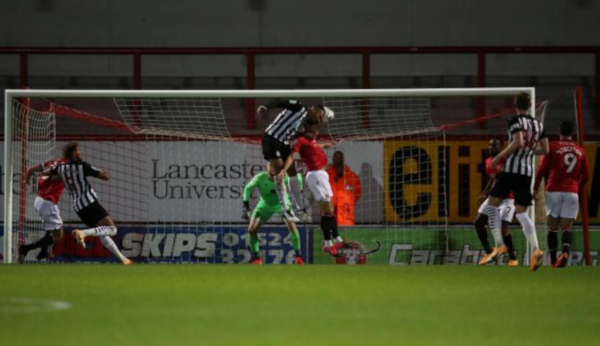 51 mins Matt Ritchie's corner from the right flank was nodded home at the near post by Jamaal Lascelles, who easily out-jumped Harry Davis. 6-0 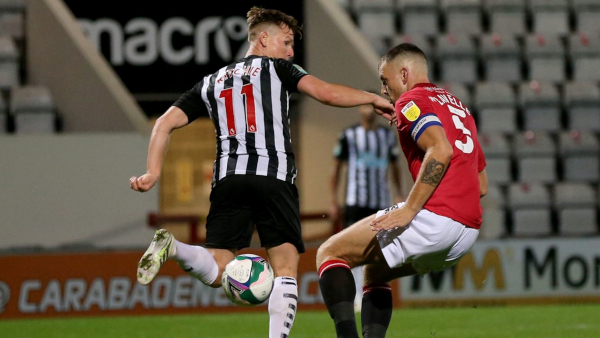 90+1 mins Substitute Dan Barlaser played a low forward pass to the right hand side of the box, where Matt Ritchie's first time flick sent the ball goalwards via an unwitting deflection off home Captain Sam Lavelle. The bamboozled home 'keeper couldn't stop it from crossing the goal line. 7-0

"It was an awful night (weather-wise), with nobody here, and if we hadn’t done things properly, we could easily have had a difficult night.

"We’ve all experienced those nights, especially at a club like ours, so it was nice to get the job done in the way they went about it. Some of the football, particularly in the first half hour, was terrific.

"The attitude really pleased me.

"We set about them and moved the ball quickly. I wished they had stayed with 11 because with 10 men they really did sit behind the ball.

"It was a good night because too often we have come unstuck on nights like this. This is why you need a squad of players.

"I hope I can pick the right team because two or three of these have given me a headache.

"There is always a hysteria around Newcastle and we need to respond with a good result. We are certainly stronger than we were 10 months ago.

"My job is to keep moving the club forward."

"After that kind of performance, I definitely won’t be letting him go. He deserves to stay with us. He’s improved enormously, and I’ve been very pleased with him, even though he hasn’t made the squad for the weekend.

"We’ve got a lot of players to choose from, but at this particular moment, I won’t be letting Jacob go.

"He’s a good young player, who’s direct and quick, and he’s grasped his chance and really given us food for thought.

"Arguably, he was our best player tonight, so fair play to him for that.”

On the possibility of cup success:

“We’ve got a squad now which is certainly capable. Of course, we got to the quarter-finals of the FA Cup last season and came unstuck against Man City, but let’s get ourselves a crack at this. Why not?

"We are capable of winning five or six games. If the draw is kind to you, who knows? Let’s have a go.”

"It was an extremely difficult night for us. Newcastle were absolutely outstanding tonight - the way they passed the ball, the way they moved, the way they pressed and the goals they scored. Undoubtedly they deserved to go through to the next round of the cup.

"To win 7-0 away from home, they respected the competition very well. You just have to see the team they put out and the goals they scored.

"The sending off at 4-0 didn’t help us but they were excellent. The gulf in class between League Two and the Premier League is massive.

"Nights like this tell you what a real football player is - how to control the ball, how to pass it, how to create and take chances.

“They are a testament to Newcastle United and their manager. They put on a show tonight.” 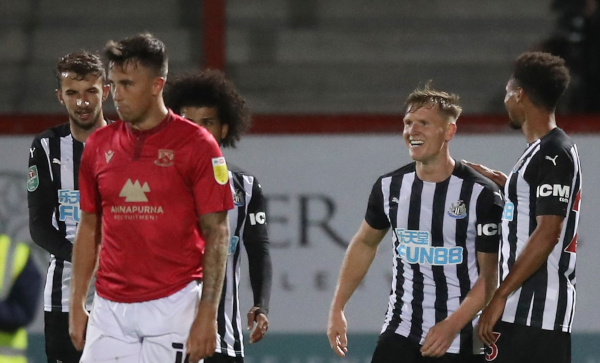 Wednesday night saw Newcastle record their biggest victory in 60 years of League Cup participation, sweeping League Two Morecambe aside on their own ground.

And their goalscoring feat wrote this side into the record books, as being responsible for the club's biggest-ever margin of victory in any away fixture.

United never looked back after Joelinton shot them ahead on five minutes, Miguel Almiron, Jacob Murphy and Joelinton again extending that lead before the hosts had a player red-carded just after the half hour.

Isaac Hayden's added time shot saw Steve Bruce's side five goals ahead at the break and Jamaal Lascelles nodded in after the restart for the half dozen.

Further chances were then made and missed before Matt Ritchie's flick in the first minute of injury time ended up in the net via home Captain Sam Lavelle.

That made it a club record seven goal away victory, but clad in their home kit with white socks, Newcastle could have easily reached double figures after racking up a handful of glaring misses.

Soon after Almiron had teed up Joelinton to sweep home, the number 9 idled as Jacob Murphy's cross struck the far post in front of him - watching to see if it went in rather than instinctively getting a touch to make sure.

Almiron's pace then took him clear of the home defence and he rounded the 'keeper before firing into the roof of the net. The lively Murphy then attacked with the ball from inside his own half, riding one challenge before belting the ball home stylishly from the edge of the area.

Within minutes Joelinton had cut in from the left flank to unleash an excellent finish for his second and United's fourth.

And by the time Hayden struck from similar range Morecambe were a man short after Toumani Diagouraga's lunge left Sean Longstaff spinning around on the wet turf. He was OK after treatment but Diagouraga was dismissed.

Five became six when Matt Ritchie's corner was nodded home by Lascelles, with Andy Carroll soon joining the party as a first goal in his second spell at SJP apparently loomed. However he wasn't able to oblige, heading his best chance wide from close range.

Emil Krafth also had a shot cleared off the line and Ryan Fraser rattled the crossbar with a header before that late seventh did arrive, set up by substitute Dan Barlaser.

There may have been a more one-sided success for Newcastle since the 8-0 humbling of Sheffield Wednesday in 1999 - but we're unable to recall it.

Tonight the black and whites were able to indulge in elongated periods of possession and passing, as goalkeeper Mark Gillespie had just once meaningful save to make. And aside from the red card tackle on Longstaff, the League Two side never showed any hint of nastiness.

It's easy to sneer at the level of opposition and say that a team of our stature and cost should routinely rout lower league sides, but earlier this year we took two goes to see off fellow League Two side Rochdale and League One Oxford with line-ups equivalent to that fielded here.

Praise then for a job well done and some relief that there didn't appear to be any injuries to complicate matters - whether for onward selection or sale.

Bruce rightly praised Murphy for his energetic contribution, the midfielder seizing an opportunity to restart his SJP career on a night when Christian Atsu was nowhere to be seen.

As for Joelinton, the flat track bully tag is valid after he struck here on the back of goals against Oxford and Rochdale last season - and they hardly ushered in an upsurge in Premier League potency.

Having witnessed countless cup debacles from Luton to Stevenage and beyond, it's completely in keeping with this club that they hit the goal trail and rewrite the record books when there's nobody allowed in to see it.

To Newport then (for the first time since 1947) and although there may only be a single point separating them and Morecambe in League Two currently, that tie won't quite be the walkover that this one ended up as.

Rodney Parade may be less muddy as a consequence of reduced rugby games, but Swansea City and Watford have already perished there this season, while Spurs and Leicester endured tricky FA nights in recent years.

If nothing else though, the scent of an upset may see Sky show it live, rather than a third successive week of the EFL's rather more homespun offering.