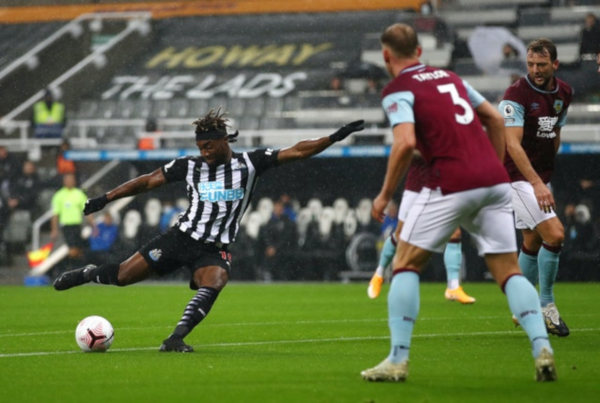 14 mins Callum Wilson did well to chest a long clearance from Karl Darlow down to Allan Saint-Maximin inside the centre circle and the Frenchman set-off towards the Leazes End goal.

Confronted with a posse of Burnley players as he reached the edge of the box, ASM jinked one way and then the other, creating a shooting chance that he executed right-footed just inside the post. Goalkeeper Nick Pope got a fingertip to it but pushed it onto the post before it nestled in the net.

That outcome further inflamed visiting boss Sean Dyche as he protested to the officials that Wilson had eased his marker Kevin Long away from him before taking the ball from his goalkeeper. 1-0

61 mins Following a Burnley corner, a Phil Bardsley cross from the left byline was headed on by Federico Fernandez and it fell nicely for Ashley Westwood who arrowed a volley beyond Karl Darlow and into the far corner. 1-1 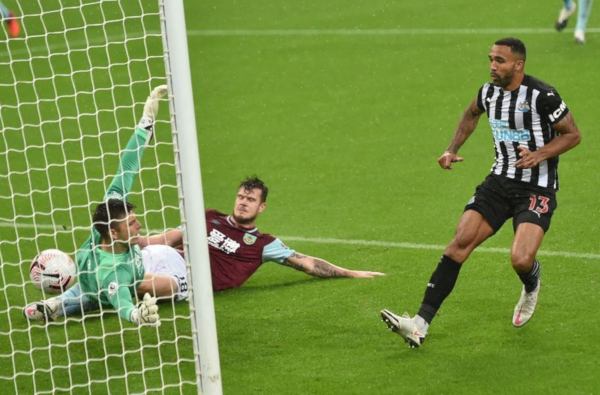 65 mins Emil Krafth played the ball up to Saint-Maximin wide on the right and he turned and sped away from Dwight McNeil and Charlie Taylor before curling a perfect low cross to the back post for Callum Wilson to tuck in. 2-1 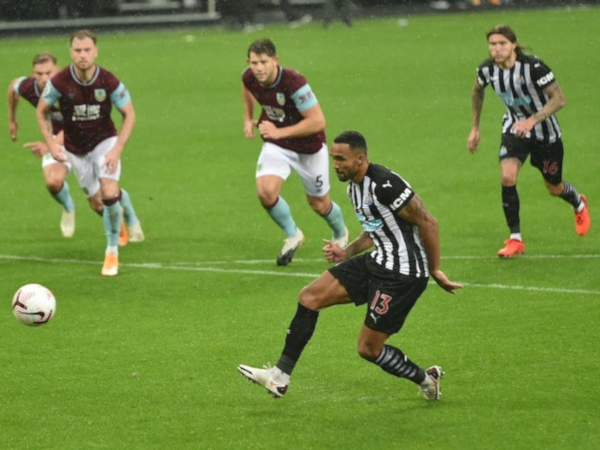 77 mins Jeff Hendrick flicked on Javier Manquillo's throw down the United right but James Tarkowski was able to play the ball back to Pope from inside the Burnley box.

The 'keeper's touch was heavy and Ryan Fraser nipped in to steal the ball, poking it first-time onto the far post. Pope though had upended him in the process and referee Coote pointed to the spot.

Callum Wilson coolly chipped the ball down the centre of the goal while Pope - who wasn't shown a card - dived in vain to his right. 3-1

"I am delighted for the players. We've all had our fair share of criticism this week, maybe rightly so.

"Tonight we have hopefully quietened a few for a while anyway. We have tried to change and be more expansive. It goes up and down so quickly - that's Newcastle.

"If we can keep Allan Saint-Maximin fit he will get people off their seats, he can do things that other people can't. He is explosive. He is a goalscorer and a threat.

"We’re still a long way from the finished article, believe me, but I hope the Newcastle supporters can see what we’re trying to do in terms of the way we’re trying to play.

"Of course there are going to be a few hiccups along the way. When you get a couple of results, especially like the one tonight, then it always helps.”

"When I see the amounts of money being spent, I think we have done a fabulous piece of business, I have to tell you.

"He’s a goalscorer and you just have to see that. There was no doubt that he would arrive in the six yard box from Allan’s cross.

"He’s had a good start. Long may it continue.”

"It’s been a difficult period for Allan in terms of fitness levels and getting it right, and it’s like that for a lot of players like him who rely on pace and power.

"But we’ve seen the value to him when he’s on the pitch. His goal and the assist for the second one, there was probably only Allan on the pitch who could do that.”

"I've known Phil Bardsley since he was 12 so I'm not surprised that he had a few kicks at him."

"It's bizarre. I don't know what's happening in the game - I really don't.

"Most managers are confused and I speak to a few. Brucie and I were laughing about it in the end.

"Real fouls are not getting given anymore and I think the referees have lost the art of real fouls. It [Wilson on Long] was a foul. I don't know why the referee doesn't give that.

"It's just weird now. You touch someone's ear and they fall on the floor and it's a foul and then our centre-half is quite clearly knocked off the ball without any intention of the centre-forward to try and actually bring the ball down and he doesn't give it.

"I think football is in a very strange state as regards the physicality and the officiating of the games. I have seen it back and that actual goal summed up our first half. There was no belief and endeavour. First half I could have played against us.

"Allan Saint-Maximin? He was a handful, well done him. I'm really pleased for him.

"On a night like tonight Nick Pope should just put his foot through it, he knows that but he's a top keeper.

"We have still got four important players missing, we have a few days off now and then we will work very hard. When everyone is fit we have got a good group. It looks different when they are all back.

Asked about the morale at Turf Moor:

"I don't think it is ideal. It it not the perfect situation for us but it is the reality of what it is. We will look to get on with it.

"The first half was the first time we haven't looked at it this season to be fair." 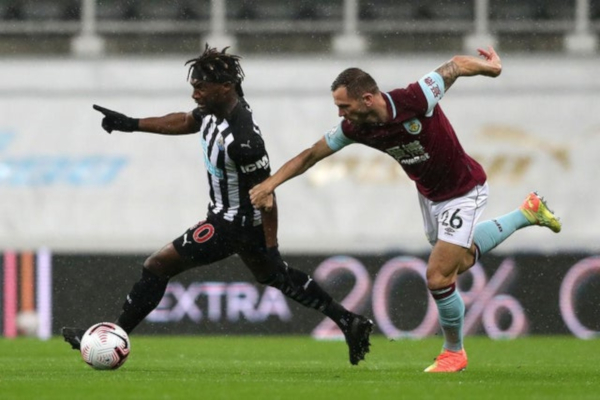 Dribbling in the rain

Newcastle deservedly collected three points for the first time in six home games on Saturday night, thanks to the dribbling skills of Allan Saint-Maximin and the finishing prowess of Callum Wilson.

Saint-Maximin marked his return to the side after injury with a wonderful solo run and strike at the Leazes End to give United a 14th minute lead - Wilson's clever chested pass setting him on his way.

And after Ashley Westwood volleyed home following a 61st minute Burnley corner, wor Al provided a sumptuous low cross to the back post for Callum Wilson to quickly restore the home side's advantage.

The energy and vision of Ryan Fraser then panicked Clarets goalkeeper Nick Pope into bundling over the Newcastle substitute in his area - Wilson coolly dispatching his second penalty in successive Premier League matches to round off the victory.

Sean Dyche's side arrived pointless after their opening two games and were placid for the opening 30 minutes here, sitting back and allowing Newcastle to enjoy what for them were unprecedented levels of possession.

Saint-Maximin's fine opener belatedly triggered a response from the visitors, taking turns to foul the scorer and also increase the number of stray elbows and sly digs aimed at other opponents.

United meanwhile failed to build on their advantage, former Claret Jeff Hendrick wastefully firing into the side netting during first half added time.

Burnley were out early on the field for the restart and for the next 15 minutes were far more offensively-minded, dominating play and forcing Karl Darlow into a block at his near post to deal with Chris Wood's header.

Westwood's leveller however inspired Newcastle to greater efforts and Saint-Maximin took Emil Krafth's pass and drove down the right flank before setting up Wilson to finish easily from close range for his first goal at SJP.

At that point the hosts had preserved their 100% shooting record for the season with five goals from as many shots on target, Isaac Hayden finally messing up that record when driving straight at Pope.

Saint-Maximin then took his leave after yet another whack on the ankle and Fraser made an immediate impact, anticipating a back pass and drawing the foul from the visiting goalkeeper.

Two goals behind, Burnley reverted to their previous subdued self and United came closest to netting again - Sean Longstaff's first touch after arriving a low curler that was narrowly off target.

Nothing really revelatory came out of tonight: players deployed in their proper positions give more effective displays, paying money for a proven centre forward and passing the ball to him pays dividends - as does getting the ball into the opposition box from time to time.

Despite that though, there were some improved displays beyond the big hitters - Krafth looking far happier when not dealing with aerial balls in the middle and Joelinton quietly becoming more effective when off-centre.

A possible recurrence of Fabian Schar's shoulder problem should mean efforts to secure central defensive cover are redoubled: Hayden is not an option in that position and is far better deployed in his usual midfield role.

Although infinitely better than the last home game against Brighton, the initial wariness of Burnley gave United every encouragement to threaten them - something that they didn't fully exploit.

As was invariably the case last season, the foundation of our victory was a switched-on Saint-Maximin that the opposition struggled to deal with by fair means or foul: quite literally headband and shoulders above the rest.

That we aren't quite a one man band this season is a reason for optimism, but the challenge of being competitive when the Frenchman is missing or off the boil remains. It's debatable whether we would have defeated a sub-standard Burnley side here without him.

Had the pubs been open after full time, the toast would been to Wor Al - with a few glasses also rightly raised in the direction of Cal. Goals win games.