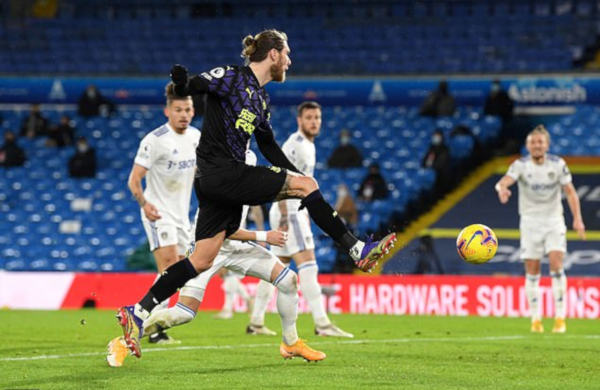 26 mins Jamal Lewis found the returning Ryan Fraser, whose cross from the left was headed on by at the near post by Callum Wilson, falling perfectly for Jeff Hendrick to fire into the goal at the Don Revie (Kop) End. 1-0 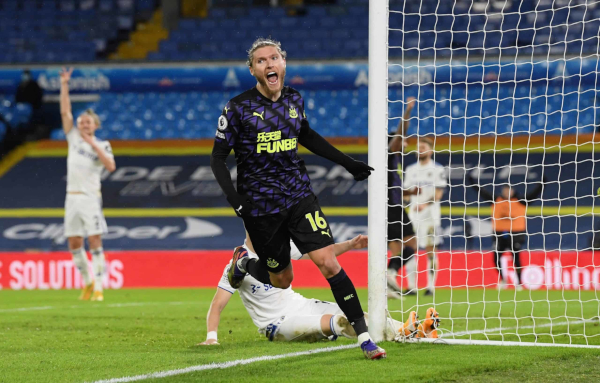 35 mins Rapinha supplied a right wing centre for Rodrigo to loop a header goalwards. Karl Darlow seemed to be caught in two minds as whether he'd gather the ball, which passed over him and rebounded off the crossbar.

Patrick Bamford was on hand to nod home into the empty net, with Jacob Murphy watching helplessly.  1-1

61 mins An excellent retrieval from Jack Harrison out on the left byline kept the ball in play and allowed him to send over a tempting centre that was expertly guided into the net from 12 yards by the head of Rodrigo. 1-2 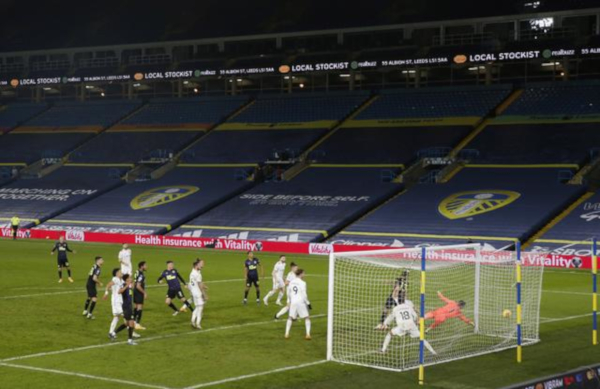 65 mins Newcastle exploited a known weakness in the Leeds defence from set pieces, Ciaran Clark beating Aisling in the air when Fraser's corner kick was sent over. Callum Wilson did his bit, obscuring the 'keeper's view. 2-2 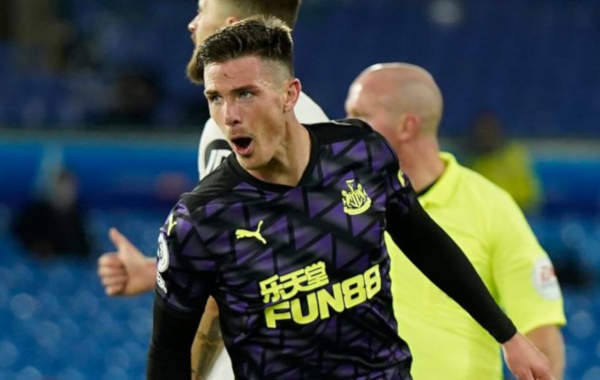 77 mins A disastrous attempt by Sean Longstaff to dribble away from his own penalty area conceded possession to the hosts and when Kilch put the ball towards the back post, Stuart Dallas arrived to head the ball down and into the Newcastle net from inside the six yard box. 2-3

85 mins Leeds broke at pace and in numbers from the own area following a Magpies corner, after which Longstaff was robbed by Kalvin Phillips. It was five against two in favour of the hosts when Alioski slammed home a rising shot from inside the Magpies box. 2-4

88 mins Leeds broke at pace and in numbers from the own area following a Magpies corner. Jack Harrison picked up the ball in his own half and motored forward before supplying a memorable strike from distance. 2-5

"Of course Leeds are always going to ask you questions the way they play, they do it very well, but we've gifted them the two or three goals at the end. Unfortunately they're something which you see on a park on a Sunday.

"We can't make those mistakes we've made here. The third goal in particular where we gave the ball away cheaply in our own box. You get punished for things like that at this level.

"At the wrong time we've given away poor goals, not defended well enough and got punished. It's unacceptable.

"I honestly was all for VAR when they brought it in to make sure the clear and obvious mistakes that the referee misses, that's what the VAR is there for.

"If anyone looks at the challenge (by Liam Cooper on Callum Wilson at 1-1) you'll understand that it's a clear penalty.

"We might not have gone on to win the match but certainly when you take the lead in the Premier League then the outcome could be very, very different.

"I'll leave it to other people to judge."

"It was a deserved victory.

"In both halves we attacked a lot and created plenty of chances, but in the second half we were more efficient.

"The team carried on playing in a calm and organised manner. Eventually we were able to get on top of them again and scored the goals we needed to.

"We managed the ball very patiently. That's what impressed me most about the team.

"Winning is always a positive thing and it helps you to go into the next game and be more calm.

"The construction of the offensive game is one of the most difficult things in football: to find a man with a cross is not very easy during a game.

"The penalty area always has plenty of players inside it and it’s very difficult for the person who crosses to find a free man in the box.” 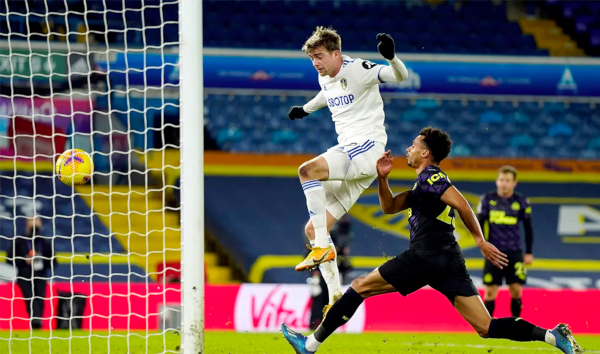 Almost nineteen years to the day that they memorably won 4-3 there, Newcastle played their part in another seven goal thriller at Elland Road on Wednesday - but left there breathless and empty-handed this time.

Steve Bruce hoped to mark his half century of league games in charge with what would have been a third successive victory - and his side went ahead against the run of play when Jeff Hendrick fired home on 26 minutes.

That lead lasted less than 10 minutes before in-form striker Patrick Bamford nodded in from almost on the goal-line after Rodrigo's header deceived Karl Darlow before rebounding off the crossbar.

And when Rodrigo steered a fine header inside Darlow's far post just after the hour, a first home success for Leeds in six attempts looked inevitable.

With 15 minutes to go and the visitors already using sole defensive sub Emile Krafth, Dwight Gayle and Miguel Almiron replaced tiring duo Joelinton and Fraser - the latter fit again and making only a second PL start for us.

However Almiron was soon found lacking after Sean Longstaff was dispossessed on the edge of his own box, the Paraguayan failing to track the run of Stuart Dallas and watching helplessly as he latched on to a Mat Klich centre to nod the hosts ahead.

Leeds then finished with a flourish as they turned pressure into more goals; twice mounting speedy counter-attacks from opposition corners and both times extending their lead after swamping Newcastle.

With a trio of colleagues in great positions, Ezgjan Aloiski netted on 85 minutes before Harrison capped another upfield charge three minutes later with a sensational long-range drive that fizzed past Darlow.

By then this looked like a game too far for a Newcastle side still dealing with the fallout from the COVID outbreak. It's difficult to see from TV though how much of their shortcomings were due to fatigue and how much was sloppy.

And after having 25 goal attempts, it's difficult to argue that the final score flattered Marco Bielsa's side. The margin of defeat could have been heavier and exposed our usual one-dimensional approach: offering opponents the opportunity to deliver knockout blows and thriving only on those occasions that they fail to take advantage.

If there is one saving grace, it's that the current ban on fans in Tier 3 areas such as West Yorkshire means that Leeds followers missed out on this win - and our lot weren't here either to endure their celebrations.