42 mins A corner from the Strawberry Corner was headed back towards goal by Abdul-Nasir Adarabioyo and bouncing harmlessly wide of the near post, until Matt Ritchie inexplicably failed to move out of the way. The ball hit him in the face and ended up in the .

There was a touch of the Steven Taylors about the way Ritchie looked like he'd been hit by a sniper, which unsurprisingly provided much hilarity for non-Newcastle fans. 0-1 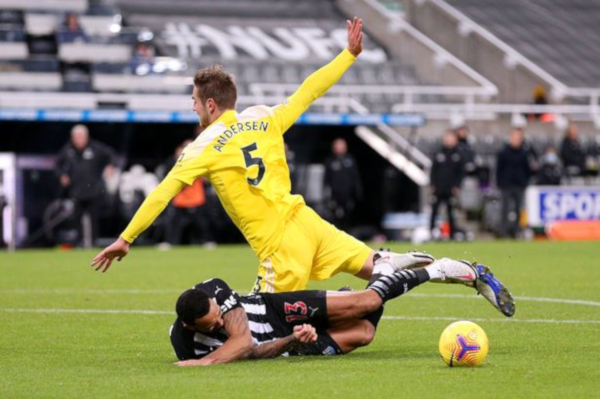 64 mins Jonjo Shelvey began a counter-attack in his own half by feeding Miguel Almiron, who drove forward before finding Callum Wilson.

United's top scorer was tugged outside the area by Joachim Andersen, before further contact from the same opposition player resulted in Wilson tumbling in the box, causing referee Graham Scott to award a penalty.

VAR then intervened and Scott ended up reviewing his own decision on a screen pitchside, upholding the spot kick call and red-carding the visiting defender.

Wilson slipped his penalty past Alphonese Areola who dived left while Wilson hit a low shot centrally into the Gallowgate End goal. 1-1 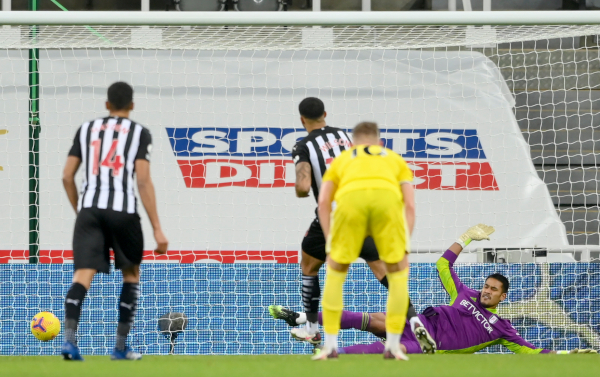 "I think the referee has made the right call. When I see the video back it looks like he clipped his heel.

"I think if we're brutally honest we weren't that great. We'll take the point. We haven't done enough today with and without the ball. Even with ten men we struggled to find any real quality to open up Fulham.

"We can perform better than we didn't. I can't fault the players' effort and honesty, but we can still improve on what we are doing. We didn't see enough tonight, or the other night.

"When you keep surrendering the ball at this level you're going to struggle. Against 10 men we struggled to create anything, but we've had a difficult week and we'll dust ourselves down and get ready for Tuesday."

"He was struggling with fatigue; both calves and hamstrings.

"The last thing you want to do is to be making defensive changes, but in the first half I could have taken four, five or six off.

"We're nowhere near the level of where we should be."

"I’ve gone and looked over the penalty incident, and I’m not saying this with emotion or being biased, I just don’t understand how he’s given the penalty if I’m being brutally honest with you.

"The initial foul takes place outside the box. Callum Wilson then steps in the box and falls over. At real speed I understand why the ref may have given it. I get that, and two years ago, without VAR, it’s one of those things you have to take on the chin that the referee has made a mistake.

"What’s puzzling and concerning, is we have VAR now, he walks over to a screen, I don’t know if he’s seeing a different angle to what I’ve just seen in the changing room, but the initial contact takes place outside the box, he then falls over. That’s what’s concerning.

"The game has changed, I think we all recognise that, the game’s become a bit of a shouting match in terms of any slight contact, any shot in the box that’s hit someone’s hand, everything’s up for appeal in this day and age.

"What’s concerning me is that we brought VAR in to make correct decisions, and yet again I sit here – like a manager or two every week – and am not quite sure how we’ve come to the decision, and that’s what’s puzzling.

"We’ve got every gimmick, we’ve got every slo-mo, we have all this five minutes wait, and yet we’re still – for me - not coming up with the right decision.

"I don’t know if there’s a lack of communication from Stockley Park to the referee on the pitch, or whether there’s an ego involved where he’s thinking he’s given the decision and doesn’t want to really turn it around.

Talking about the game in general:

"I have nothing but admiration and good words to say about my team. I thought we were exceptional tonight, certainly first half I thought we showed a real quality about us.

"Probably a fair reflection would have been a couple of goals going in. We missed a couple of big, big chances in the first half.

"And then there’s no denying that in the second half the penalty changes the game, and the sending off. Down to 10 men we had to show another side to us and really roll our sleeves up and show our resilience, which we did, so overall I thought we showed two sides to us tonight.

"One is our quality and how well we can play, and the flip side of that is the last 20 minutes, a real solidness to get out of here with a point, but overall I’m very, very pleased with the team.

"I’m disappointed with the penalty and how it came about, but overall I’ve got real praise for my team.” 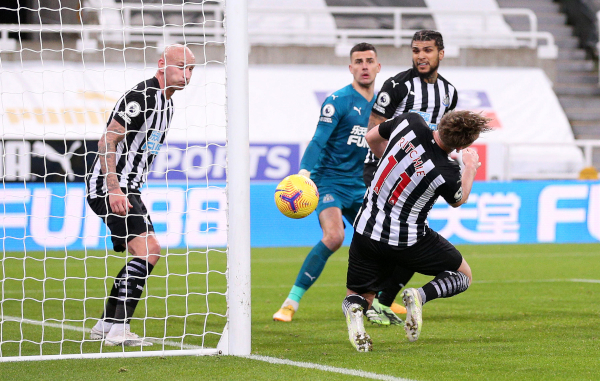 Seventy-two hours after their heaviest defeat of the season, Newcastle came from behind to claim a point on Saturday night - but looked anything but convincing in doing so.

Unbeaten in their last two games, Fulham went ahead in the 42nd minutes when Bobby Decordova-Reid's flick was heading wide before Matt Ritchie inadvertently diverted it into his own net via his face.

However comical that goal was though, it doesn't obscure the fact that Scott Parker's side had looked far more proficient and motivated than his former employers.

Parity was restored on 64 minutes when Jonjo Shelvey began a counter-attack in his own half by feeding Miguel Almiron, who drove forward before finding Callum Wilson.

United's top scorer was tugged outside the area by Joachim Andersen, before further contact saw him tumble in the box and Graham Scott award a penalty.

VAR then intervened and Scott ended up reviewing his own decision on a screen pitchside, upholding the spot kick call and showing a second yellow card to the visiting defender, who was booked early in the second half.

Wilson slipped his penalty past Alphonese Areola but that proved to be the high point of the home display, with the opportunity to go on and claim victory totally wasted.

Don't be deceived either by the unfamiliar back four that included DeAndre Yedlin for only the second time this season in the PL and Paul Dummett for the first time since January.

Federico Fernandez failed to return for the second half and Isaac Hayden arrived to partner Ciaran Clark, but despite the unfamiliar personnel on show, our main concerns weren't at the back.

Depressingly, given every opportunity to press home their numerical superiority against a depleted Fulham side happy to settle for a point, we showed nothing and couldn't raise our game one iota.

Passing was aimless and pressure was fitful, while our reticence at pushing into the final third of the field returned - along with dead ball profligacy.

Dwight Gayle was introduced for the closing stages, but never had a sniff of goal - or a pass worthy of the name. The way the ball was lumped forward aimlessly, suggested the players thought Andy Carroll was on, not Gayle.

Having spurned this early Christmas present, Newcastle now have the diversion of Tuesday's League Cup Quarter Final before a trio of horrible league games.

18 points from 13 games looks odds-on to be the same total in a fortnight's time, while it's anyone's guess what the goal difference will be following the combined efforts of Manchester City, Liverpool and Leicester City against a suspect defence.

A poor show then, but only the manager and his staff know the extent to which this deflating display was due to medical issues, or lack of focus and organisation.

That latter issue was there before players starting getting those positive test results....