86 mins Matt Targett and Morgan Sanson exchanged passes down the Villa left and when Targett swung the ball over, a flicked header from Ollie Watkins hit Ciaran Clark's leg and flew into the top corner with Dubravka helpless. 0-1

90+4 mins Substitute Andy Carroll's fine sliding tackle hooked the ball back into our possession as Villa looked to break. Jonjo Shelvey then swung a ball across the box from the right side that eluded everyone but Jacob Murphy.

He collected it, steadied himself and then crossed superbly to the near post for Jamaal Lascelles to bullet a header into the top corner of the Gallowgate End. Delight and relief in equal measure. 1-1 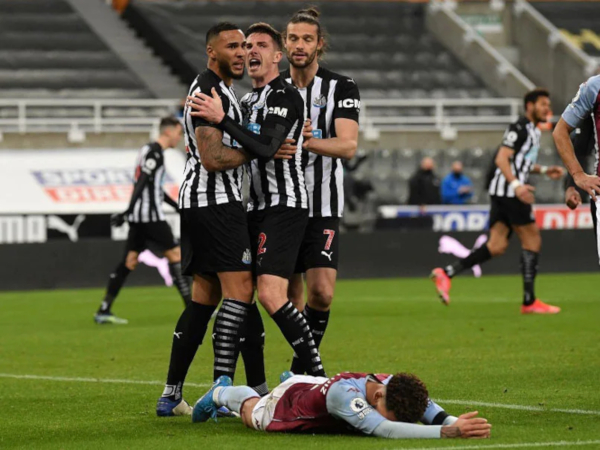 "There wasn't much in the game.

"Arguably we had the best chances but the goal they scored was a bit of a fluke. Then you have to show desire to get back into it and we did that. We at least deserved that.

"There are still 10 games to go. We've got to show the same attitude and hopefully big players are back around the corner - that will certainly help. We’ve been a bit hampered. To miss one is cruel enough, to miss three…

"There’s still ten games. We’re unbeaten in our last couple (it's 3, Steve) – we’d have loved to have won one of them, that helps – we’ve got to still show the same attitude.

"In this division you don't get chance after chance. It's difficult. At the top end of the pitch, you're only as good as your strikers.

"The one thing I'm really pleased about is our desire. I thought we were marginally the better side and it would have been cruel if we hadn't got something from the match.

"He’s come in for a lot of criticism, Joe, but he’s contributed to the team and his performance. Of course he needs to score the goal and be the hero but that hasn’t quite happened for him yet.

"He’s performing as well as he can do and I’m sure there’s a goal around the corner. His all-round performance, we’re pleased with him.”

On the deployment of Gayle:

"We've played a certain way now for the past six, seven weeks.

"I spoke briefly on it last week, of not trying to change the shape of us, the way we've gone about how we're trying to play.

“I'll be a bit more technical and say we're playing with split strikers if you like, but that's the way we've gone about our work and I changed him and Ryan just after half-time.

"It's difficult and the top end of the pitch, as I've always said, you're only ever as good as your strikers and unfortunately at the minute, we've got two or three who are missing for us and we have got people who are absolutely trying their utmost.

"I can't ask for any more effort and endeavour, and of course you'd love to take one of those chances which unfortunately we missed tonight."

"When you’re a goal up with four minutes to go, you’re disappointed, naturally. We didn’t deserve to win the game over the 94 minutes.

"It wasn’t a game for the purists, it was a bit of an ugly game with not many completed passes and not many clear-cut chances.

"They probably had the better chances, but when you score a goal like we did in the 90th minute you should go and see it out.

"To be fair to the boys, I can't be too hard on them because they have done for most of the season.

"It’s always a concern when you’re not creating chances. There haven’t been too many games where we haven’t created big chances.

"Tonight was just a very scrappy game. There weren’t many big chances all game. We played Sheffield United a couple of games ago and got beat having created the big chances in the game.

"We’ve got good enough players to go and score goals. We’ve got a few at the moment who are a bit short of confidence with no rhythm. That seems to be across the league at the moment.

"It's two (points) dropped from scoring in the 89th minute or whatever it was.

"We got a great opportunity to get a three or four v one and go and finish the game off to make it 2-0 and we messed that up, and then we messed a few clearances up and they end up scoring with 10 seconds to go, so we're disappointed." 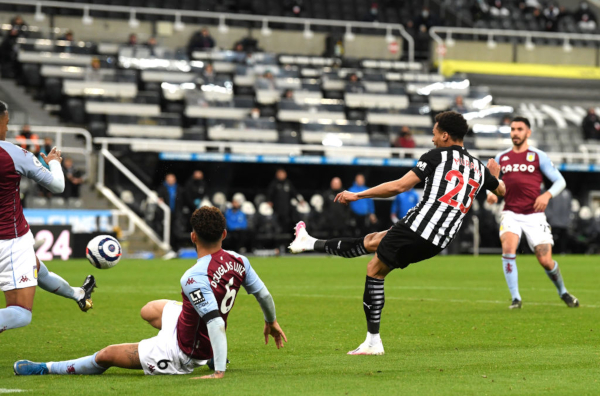 What their Manager may have referred to as another accumulation of point - their third in as many games - saw Newcastle maintain their glacial progress on Friday night towards avoiding relegation.

That looked anything but likely though when Ciaran Clark's inadvertent touch on an 86th minute effort from Ollie Watkins was enough to register an own goal in favour of his former club.

Villa's goal came moments after newly-arrived substitute Jacob Murphy had pinged an effort off the Gallowgate crossbar - United's most dangerous moment of the game up until that point.

But in the fourth minute of added time, Andy Carroll's crucial intervention regained possession and ended with Murphy swinging over a cross that Jamaal Lascelles headed in for a second goal in as many home games.

Earlier, the current owner of the number 9 shirt had undermined an otherwise industrious performance by working himself into dangerous positions four times, but failing to either complete a pass or get a shot away on every occasion.

That latest bout of goalphobia came in front of a gaggle of players who had no such issues: Callum Wilson up in the stand, Alan Shearer and Rob Lee on opposite sides of the ground and Les Ferdinand on studio pundit duty.

The late burst of activity was in stark contrast to much of what went before; both sides untidy and the SJP ball boys far busier than either goalkeeper.

Once again without Jack Grealish, the opening hour or so saw Villa no more threatening in front of goal than West Bromwich Albion had been on Sunday - and forced to replacement Anwar El Ghazi early on after he collided with an advertising board behind the Gallowgate goal.

The home side belatedly began to push forward in the final quarter of the game, Joe Willock leading the charge as his side belatedly became more aggressive. Why the hell it takes us so long remains an unanswered question.

Recalled for Jeff Hendrick and in a front three with Ryan Fraser and Joelinton, Dwight Gayle was busy never had sight of goal until very late on, when his back heel in the six yard box was blocked.

His earlier lack of involvement stemmed partly from playing wide with Fraser going central - although they swapped after the break - Bruce's comments about sticking to the shape regardless of personnel implying that coach Graeme Jones was getting the praise or the blame for how we set up.

Then came the goals at either end and while Lascelles was lauded for again doing what our front players cannot, the platform for a point came from Martin Dubravka, whose vital save from Watkins in the 93rd minute denied Villa what would have been a clinching second goal.

If last week's stalemate at the Hawthorns had the stench of a defeat, then tonight's draw felt more like a victory - or at least a relief, albeit in the knowledge that we have one less chance of winning a game.

With no sign of any of our sidelined players returning at Brighton, hopefully this late show will inspire those on the field in an absolutely pivotal 90 minutes. Sadly though we don't for one second believe that we possess the collective wit or guidance to go and win there and do anything other than hope it turns out alright. Hardly inspiring with Ł100m+ at stake.

And quite why his number 6 is a far better prospect than his number 9 for propelling that round thing towards the net is one for our vastly-experienced boss to mull over on his days off....